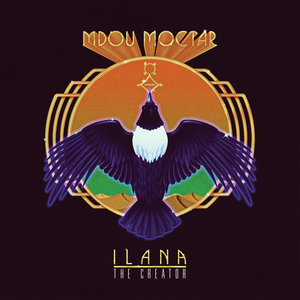 We seem to be living through a crest of the tidal wave of Desert Blues these days, what with bands like Tinariwen, Tamikrest, Imarhan and the likes finding global fame.  Mdou Moctar, a Toureg guitarist from Niger, deserves to join this pantheon.  Moctar’s music is based in the same swirling Desert Blues as the others, but his guitar playing sets him apart.  In essence, he introduces the psychedelic to the genre, shredding in the wake of Jimi Hendrix.

Ilana (The Creator) is his fifth album, and whilst his earlier work features his unique guitar stylings, it is on this album that he incorporates a more rock-oriented sound, which adds incredible depth to his fret work.

When the Stone Roses released their second album, Second Coming, in 1994, it was widely panned because it wasn’t their début album all over again and John Squires’ guitar had taken over the sound.  I always argued that if any other band had released that album, with Squires’ swaggering, swirling guitars, it would’ve been hailed as genius.  What does this have to do with Mdou Moctar?  Well, Ilana (The Creator) reminds me of that ill-fated album.  But this is even better.

Moctar has claimed to not really know what rock music is, though that seems to be a bit of a sleight of hand as the bass and drums provide a looping rhythm section that his guitars wind and twist their way around, soar over and then sneak back up upon again.

His voice also sets him apart from most Desert Blues vocalists, who tend to have world weary, raspy voices that find their spaces in and between the swirling guitars and percussion. Moctar, on the other hand, delivers his vocals like Hendrix, laid back, buried deeper in the mix and in a gentle and sweet voice.

Taken altogether, this is one fiercesome, brilliant album.