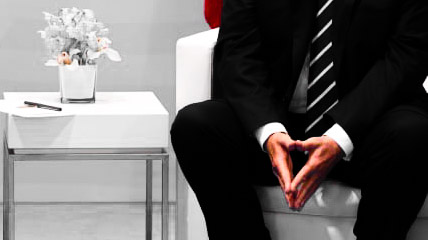 We all know that Trump’s idiocy has meaning–the too-long tie, the compressed facial expressions that amount to an imitation of a bullfrog, call it a frown, even the casual gestures as he approaches or departs the press corps. But does he mean it?  Well, yeah, the tie is “slimming,” he says.

But me, the secret psychoanalyst, I keep asking, what’s with the triangle he always lowers to his crotch when the photo op occurs, from family portrait to state occasion, like yesterday with the wife of the pretender to the Venezuelan throne?

Thumb to thumb, always, and what, always accompanied by the frown? Is he creating a gunsight, asking us to zero in on his shriveled mushroom dick?  Is he making us focus on the intersection of his legs, where reproductive organs manifest?

Or is he reminding us of Bill Clinton’s so-called political strategy, you know, like “triangulation”?

OK, here’s my diagnosis.  This man thinks he has no penis—he really believes he was castrated by Daddy—and wants us to know it.  This lack explains everything.  The man is stuck in front of that fabled mirror, wondering, what is it that I  have I lost?  He doesn’t even know what happened to him, but he wants us to know that it did.