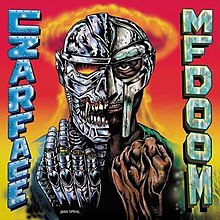 Czarface Meets Metal Face
Get on Down!

When MF DOOM is on and dialled in, I don’t think there’s a greater rapper out there  His lyrics are deft, subtle, and often funny.  His delivery is smooth and rich.  One of the most prolific rappers in the hip hip underground, DOOM bridges the gap between the underground and mainstream through his frequent collaborators, most notably with Ghostface from Wu-Tang Clan.

Czarface is a collaboration between another member of the Wu-Tang, Inspectah Deck and Boston’s 7L & Esoteric.  Like DOOM, Czarface exists in the hip hop underground and makes comics-inspired music.  Czarface’s last album, 2017’s First Weapon Drawn, tells the origin story of Czarface, who is a wrestling superstar, and offered a mask to save his life and find greatness (Ghostface could relate to this, with his variable origin story for his alter ego, Tony Starks).  Czarface, according to Esoteric, is a character representing all three members of the supergroup.

So when Czarface meets DOOM, we get brilliant underground hip hop.  The beats are vintage DOOM, or are they vintage 7L & Esoteric?  Big fat basslines, crisp beats, they have a root in the so-called Golden Age of Hip Hop, but are kept relevant with the flourishes and samples.  And Inspector Deck, DOOM, and Esoteric are all on point here.

The album tells the story of how Czarface met DOOM.  Czarface’s mask is metal, and causes him to be a close talker, when he meets DOOM he has the perfect pitch for him.  You see, every hero (which is Czarface) needs a villain and, of course, DOOM is the masked super villain.  As Czarface notes in ‘Astral Training,’ his powers are ‘incredible and astonishing,’ whereas DOOM’s are, as he notes, ‘mental.’

There is no real resolution in the battle between our hero and villain, but, really, does it matter?  This is classic hip hop and it’s obvious all of them are having fun.  It’s also a nice reminder of how great DOOM can be.