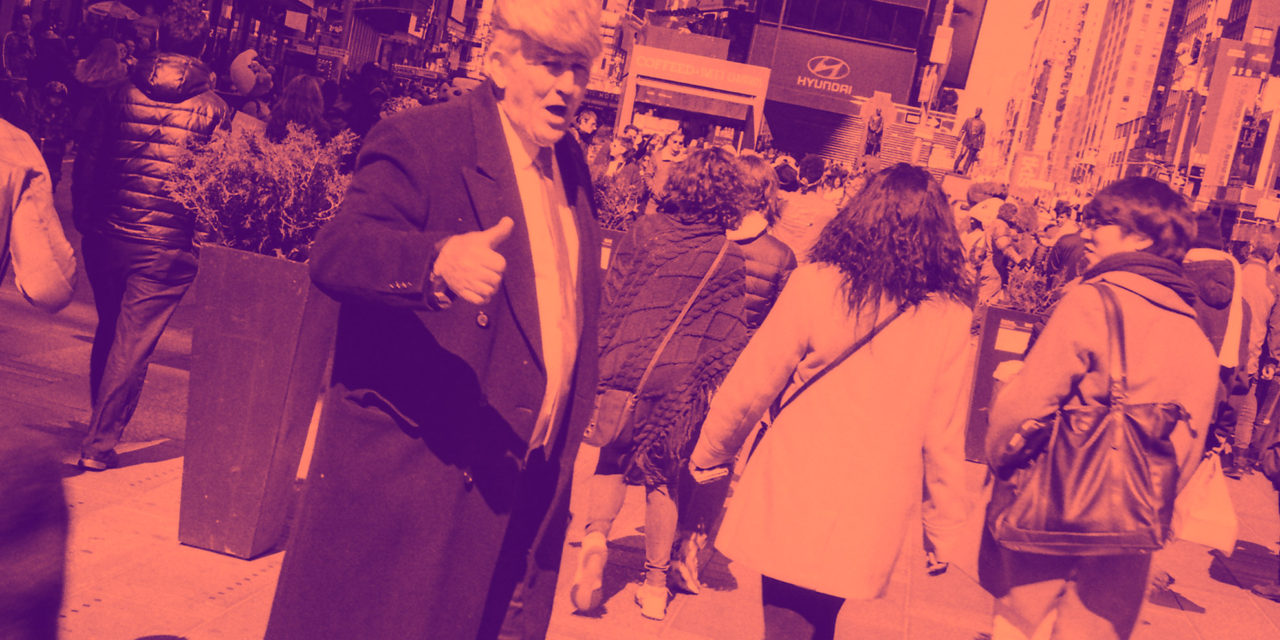 You know you live in interesting times when you can’t tell Left from Right—when “social justice warriors” on campus, students and staff alike, try to limit the scope of free speech by filing Title IX or broader claims against faculty whose extracurricular writing offends their sensibilities, and when avowed conservatives not only lead the fight to protect the 1stAmendment but offer more compelling criticisms of capitalism than their liberal or leftist counterparts.

This is our current condition. I have some first-person experience of this political flux. I live in Harlem, a historically black enclave of New York City which is undergoing rapid gentrification—more white residents, much higher rents, brownstone renovations everywhere you look. In late May of 2018, I wrote a satirical Facebook post about this worrisome process, saying, “I now officially hate white people. And I am a white people, for God’s sake.” I concluded the post by resigning from my race.

Thereupon a tsunami of comments appeared on my Facebook page, all of which accused me of racism, and a greater volume of similar invective filled my email inbox. With four exceptions in over 300 emails and phone messages, these accusations came from alt-right and neo-Nazi sources. Meanwhile, it seems, my employer, Rutgers University, received comparable complaints about the post, apparently condemning it as an expression of racism (I’ve never seen these complaints).

In June, therefore, the Human Resources department at Rutgers started an investigation, asking whether I had violated its policies on racial harassment and discrimination, thus damaging the stated mission and reputation of the university. The ensuing HR report, written by the department’s Associate Director, agreed with my alt-right and neo-Nazi interlocutors in convicting me of harassment and discrimination on racial grounds—in other words, of racism.

I appealed the finding, of course, insisting that “reverse racism” is at best a red herring—racism in North America is about power, not hatred—but the vice-president who oversees HR ratified the Associate Director’s report within 36 hours. Thereupon the president of Rutgers stepped in to forestall this rush to judgment, appointing an ad hoc committee to conduct a “more rigorous analysis” of the situation. The committee convinced HR to reverse its original funding, and conclude that, in fact, I had violated neither the mission nor the policies of the university. Case closed.

I tell this story to remind us that, on campus at least, the liberal left is willing, even eager, to curtail freedom of speech—that is, to repudiate what was once common cause on the Left, to use illiberal means to contain the range of pubic opinion in the name of civility or comity, or mere safety.

Meanwhile, avowed conservatives of a populist bent have challenged the neo-liberal consensus on free markets, and have, willy-nilly, opened space for serious consideration of socialist alternatives to capitalism. This challenge from the right to actually existing capitalism isn’t as weird as it seems. Neo-conservatism as such was founded (by Irving Kristol) on opposition to the free-market fundamentalism of Friedrich von Hayek and Milton Friedman. Populist movements, moreover, typically worship at the shrine of der volk, the salt of the earth, and depict the “forgotten men”—the ones left behind by the creative destruction that is capitalism—as enemies of big business, technical expertise, and cosmopolitan elites. Like George Wallace in 1968 and 1972, Donald Trump depicted himself as their champion.

But since his unlikely triumph in 2016, Trump has betrayed these “forgotten men.” Of course he has. His tax cuts went mainly to the big banks and the truly wealthy among us—the 1%, as we now designate them. His deregulatory mania will endanger working men and women first and last, not the cosseted sliver of society that can afford to filter its water and flee to higher ground, whether in Aspen or Auckland.

Even so, Trump does speak to and for the “forgotten men” of our time, by invoking white male supremacy and the racialized nationalism that always (already) accompanies it. That is the outsized significance of the Wall, for Trump himself and for his supporters. It reconstitutes what is to be protected from foreign predators who are always (already) non-white peoples bent on stealing jobs and women from Americans—vicious gangsters from South of the border, inscrutable hackers and state-sponsored companies from the Far East, poor refugees from “shithole” countries in and near the Dark Continent.

You might even say that the Wall is the only thing the various factions of the Right now agree on. Tucker Carlson, one of several avowed conservatives (Ann Coulter among them) who has broken from the neo-liberal consensus that still rules inside the Beltway—and still determines the tax-cutting, deregulatory agenda of Trump’s Republican party—remains convinced that foreign labor is the fundamental, existential threat to the “forgotten men” Trump claims as his electoral base. Here is how Carlson explains that threat while wondering how rural America recently reproduced the conditions of the late-20thcentury urban crisis (high male unemployment, soaring out-of-wedlock birthrates, drug epidemics): “Two different worlds. Similar outcomes. How did this happen? You’d think our ruling class would be interested in knowing the answer. Mostly they’re not. They don’t have to be. It’s easier to import foreign labor to take the place of native-born Americans who are slipping behind.”

This passage comes halfway through Carlson’s now famous FOX News monologue of January 6th, 2019. Before and after, you’ll find anti-capitalist rhetoric so scalding that AOC or Bernie Sanders or Elizabeth Warren could have written it. In fact, in a VOX interview with Jane Coaston (January 10, 2019), Carlson acknowledges that his remarks were “somewhat reminiscent of AOC’s past comments on the economy,” and admits he cribbed from Warren as well.

Like the overwhelming majority of his fellow citizens, he rejects the notion that the American Dream is mostly a matter of getting rich, or being through having**, and he invokes the Declaration in telling us why: “Anyone who thinks the health of a nation can be summed up in GDP is an idiot. The goal for America is both simpler and more elusive that mere prosperity. It’s happiness. There are a lot of ingredients in happiness. Dignity. Purpose. Self-control. Independence. Above all, deep relationships with other people. . . . They’re what our leaders should want for us, and would if they cared. But our leaders don’t care. We are ruled by mercenaries who feel no long-term obligation to the people they rule.”

Carlson concludes with a snarl. He asks what kind of country you—we—want to live in, and he answers sincerely enough: “A fair country. A decent country. A cohesive country. . . . And above all, a country where normal people with an average education who grew up in no place special can get married, and have happy kids, and repeat unto the generations. . . . .”

And then he denounces the mindless worship of capitalism as the principal impediment to achieving such a country: “What will it take to get a country like that? Leaders who want it. . . . . But first Republican leaders will have to acknowledge that market capitalism is not a religion. Market capitalism is a tool, like a staple gun or a toaster. You’d have to be a fool to worship it. Our system was created by human beings for the benefit of human beings. We do not exist to serve markets. Just the opposite. Any economic system that weakens and destroys families isn’t worth having. A system like that is the enemy of a healthy society.”

The subtext here is socialism, personified by Octavio-Cortez and Sanders. Like Theodore Roosevelt, who in 1910 offered radical economic reform—a minimum wage, subsidized child care, legal protection for unions, close supervision of corporate behavior (not trust-busting), and more—as the only practical alternative to “proletarian revolution” (his words), Carlson, who cites TR as inspiration, proposes radical economic reform as the last line of defense against the growing menace of socialism: “Socialism is a disaster. . . . But socialism is exactly what we’re going to get, and soon, unless a group of responsible people in our political system reforms the American economy in a way that protects normal people.” (my italics)

Carlson’s rant reminds us that the differences between factions on the Right are at least as significant as the differences between Left and Right, or between Democrats and Republicans. It also alerts us to the fact that, as in the early 20thcentury, socialism is an actually existing alternative to the status quo capitalist. This time around, however, it’s even more culturally, intellectually, and ideologically pervasive—the polling data show overwhelming public support for everything the Republican party abhors, from taxing the rich and Medicare for All on toward a Green New Deal—even though, unlike then, there is no political party that calls itself socialist, and no single movement that knits the various strands of the Left into a coherent programmatic weave.

This incoherence is, to my mind, all to the good. Socialism is a cross-class brace of movements, not the exclusive property of “the” working class or a labor party. So it broadcasts on different wavelengths, and it appeals to disparate constituencies on sometimes contradictory grounds—but it always places its bets on the sovereignty of “the people,” in all their glorious variety and lunacy, because socialism is a means to the end of democracy, not an end in itself. As Carlson might say, it’s a tool, like a staple gun or a toaster, nothing more or less.

Now, by socialism old Tucker means state ownership of the means of production, which has proved, as a matter of historical fact, to be a disaster. Markets properly constructed and regulated—that is, socialized—are the necessary condition of both liberty and equality, which together, and only together, permit and sustain democracy. The current representatives of socialism know this. They’re neither interested in nor advocates of a Soviet-style model, as per Carlson’s (and Trump’s) specifications. They’re market socialists, as we used to say, who want to protect civil society, not make it subordinate to the state.

“And soon.” Unlike most of the comrades on the Left, conservatives like Carlson (also Coulter, Francis Fukuyama, Rod Dreher) see socialism as a live option, a going concern, a vital and growing movement that has emerged from the ruins of free market fundamentalism—they don’t treat it as an exotic foreign import to be justified by appeals to Marx and Lenin. In this sense, they’re rediscovering the insights and attitudes of Kristol, Sr., who founded neo-conservatism as a third way between the Scylla of statist socialism and the Charybdis of unbound, neo-liberal capitalism.

In any event, enough prominent, influential conservatives, even some talking heads at FOX, now realize that the “private equity model” of governance—all destruction, no creation—has exhausted whatever promise it once held, and that they must challenge its epitome in the White House. In short, the ruling class, of which Carlson is an organic part, has splintered. When that has happened in the past, revolutions followed, as in 1640, in 1776, in 1789, in 1860, in 1911, in 1917, and in 1959.

We can’t expect this result. But we can expect that the radical reconstruction of American political discourse which began in Zucchotti Park eight years ago will continue, simply because the far Left and the far Right are very close to agreement on what ails us—it’s not just the economy, stupid, they say, it’s the much larger social system we call capitalism.

**See Samuel J. Abrams, “The American Dream is Alive and Well,” New York Times,February 5, 2019: “This pattern—seeing the American dream as more about community and individuality than material success and social mobility—appeared across demographic and political categories.” Indeed, Abrams found that “less than 20 percent of those in either party held that becoming wealthy was essential” to living or achieving the dream.