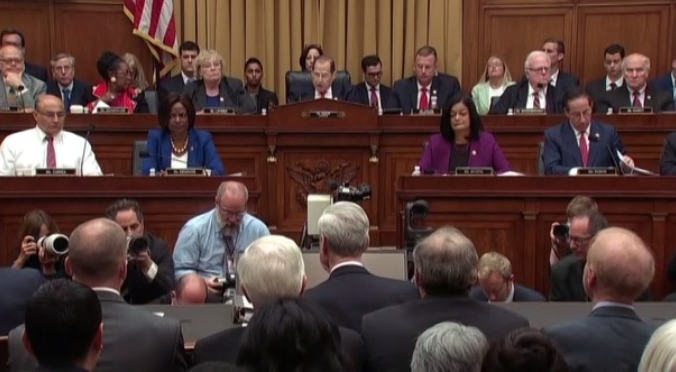 
Commenting on the Mueller testimony yesterday, James Poniewozik, of the New York Times, noted the difficulty of adapting big books for the small screen. “Asked to Put On a Show, Mueller Wishes You’d Read the Book,” was his witty headline. But the headline was misleading. What happened yesterday was more like an episode of live reality TV.

The thing about live reality TV is it doesn’t always go the way you expect. Regular TV programming, reality TV included, is scripted and edited. Only on live television might something actually happen. Janet Jackson’s “costume malfunction” at the Super Bowl halftime show years ago is an example. Malfunction, or possibly dysfunction, stand out and certify that what you are watching was for a moment, as it were, unmediated: human. When something happens on live reality TV, the surprise actually verifies the “reality,” the liveness, the humanness of the show.

The big surprise was that the giant who terrified Trump so much that he tried at least twice to have him fired (and then tried to cover that up, asking White House Counsel to lie about it) is not so gigantic after all. Mueller is nearly 75 years old, and he is not a reality TV star but a measured lawyer and bureaucrat who may be hard of hearing and whose speech and comprehension are a bit slowed, perhaps by age, perhaps by temperament.

What should have terrified Trump, and probably did, was not Mueller, as such, but what his name stands for: the cadre of mid-career lawyers hired by Mueller to do the work of the investigation Mueller was charged with running. They were not on hand to testify yesterday, but they should be called in to testify. Yesterday, we learned how important their testimony will be, and we learned why DoJ was so keen to prevent it beforehand.

Americans also learned something else important. Investigations, just like governments, are not the work of single men but of networks of diverse people working together, sometimes in concert, sometimes at odds, to make things happen. Those who think or say “I alone can fix it,” or believe someone who says that, is not only foolish. They also diminish the unique kind of power that is generated only by institutions and collectivities or partnerships. Anyone who has ever played or worked on a team, marched in a protest, or celebrated an electoral victory with others knows the sheer joy of being together with others in power. The people of Puerto Rico are surely experiencing that right now.

In yesterday’s hearing there was a small but important example on display of the power of more-than-one. Adam Schiff and Robert Mueller seemed to have a kind of mind-meld when Schiff asked a series of pointed, short questions that assessed the moral and political implications of the report’s finding.

Schiff… From your testimony today, I’d gather that knowingly accepting assistance from a foreign government during a presidential campaign is an unethical thing to do.

Mueller
And a crime in certain circumstances.

Schiff
To the degree that it undermines our democracy and our institutions, we can agree that it’s also unpatriotic.

Schiff
And wrong.
…
We should hold our elected officials to a higher standard than mere evidence of criminality.

Schiff
You’ve held yourself to a standard of doing what’s right.

Mueller
I would hope.

So clear and concerted was this back and forth that it offered a compelling counter to the lone actor myth that continues to bewitch American politics. As often happens in circumstances of cooperation and collaboration, Mueller became more himself, not less so, as he entered into this dialogue with Schiff. I imagine the same of the lawyers who worked under him for the last 2 years: dedicated to a shared purpose, they likely shared moments during that time when they brought out the best in each other as well.

As the political theorist Hannah Arendt notes, action in concert generates power, it does not consume it. It is, we might say today, the greenest kind of power there is. But just as green power requires storage devices like batteries to preserve it, so too action in concert requires storage devices of its own. Events do not speak for themselves. Like wind and sun, they come and go. To preserve the power of the event, we need to create storage devices. This is what we do when tell the story of the event in a way that will keep the energy going.

Some are already at work, harnessing the energy of yesterday’s event to depletion machines. Republicans have declared victory because, they say, Democrats did not yesterday get the TV moment they supposedly wanted (no J’accuse! from Mueller). But that is what Republicans do – they declare victory. Remember “Mission Accomplished,” George Bush’s declaration of victory in Iraq on May 1, 2003, a mere 6 weeks in to the American military involvement in Iraq that went on for almost a decade (some would argue it is ongoing). The tactic is also Trump’s. This what he does, even if in so doing he defies reality. He will declare victory at his sentencing hearing, one day (god willing).

He had made clear he would volunteer nothing and certainly say nothing new. And yet he did so twice (maybe more). In response to Schiff, Mueller agreed that “knowingly accepting assistance from a foreign government during a presidential campaign is [not only] an unethical thing to do,” as Schiff put it but it is also, Muller added, “a crime.” Certainly “a crime in certain circumstances.”

The second departure, as Vox reported, “one of the few times…Mueller actually interjected and elaborated in response to a question,” was to tell the House Judiciary Committee that “he made hiring decisions based on “the capability of the individual to do the job” and do it “seriously and with integrity.”

What Vox does not note is that Mueller actually strung out the word integrity in that moment so that what we heard was something more like “in-teg-ri-ty.” Every letter articulated in time slowed not by age but by moral seriousness.

To this our only response as story-tellers of the event must surely be R-E-S-P-E-C-T. And to express that respect by telling the story of what happened yesterday in ways that preserve and harness its energy so that all those fighting to (re)democratize American institutions can be nourished by it for a long time to come.