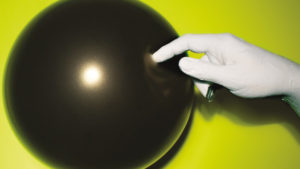 The record label Secretly Canadian isn’t actually Canadian.  It doesn’t even have an office in Canada.  I don’t know who they’re trying to fool.  Suuns, on the other hand, are Canadian, from Montréal.  I first saw them live c. 2009 or 2010 back home in the Mecca, in a dusty, concrete room, with a lot of black steel girders, a kind of post-modern music hall on the Lower Main.  I don’t think there was more than 150 people in the room, but it was hard to tell from the dry ice.  Four shadowy figures were on stage, and they made a massive amount of noise.  Cacophonous beats and pulverizing bass, with shimmering guitars and keyboard peels over top.  Frontman Ben Shamie’s disjointed, ethereal voice wavered over top of the noise. I was hooked.

Their début album, Zeroes, QC, appeared in 2010 and was followed up by Images du futur in 2013, and Hold/Still in 2016.  They also released an absolutely brilliant collaboration with fellow Montrealer Jerusalem in My Heart in 2015, creatively entitled Suuns and Jerusalem in My Heart.  That one, in particular, remains in heavy rotation around here.

Felt is more of the same and yet it is not.  The beats feel bigger and loopier this time around.  I listened to this album on headphones the first time.  My brain is still bouncing around my skull in response.  Suuns originally formed back in 2007 when Shamie (who also plays guitar) and bassist Joe Yarmush (who also plays guitar) gathered to create beats, which then evolved into actual songs (Max Henry plays keyboards and bass and Liam O’Neill is the drummer).  In many ways, Felt is created around the beats, or so it seems, first.  The rest of the music comes next.  And there is a lot, and it is loud.  Between the guitars, bass, and keyboards, there is a lot going on here musically; the cacophony swirls around in the speakers, both drone-y and hypnotic (not unlike fellow Montrealers, Godspeed You! Black Emperor, though they do this with guitars).

Suuns have been compared to Liverpool’s Clinic on more than one occasion, an early review I read of Zeroes, QC, complained that they were essentially a Clinic rip off.  I don’t think so.  True, Shamie’s voice, in particular, sounds a lot like Ade Blackburn, but the Montréal outfit is much more adventurous in their sonic palette.

And so, Shamie’s vocals. I have to admit, I don’t know the words to a single Suuns song.  I don’t really pay attention to his lyrics, which is rare for me.  I like words. I like how poets, songwriters, novelists use words to construct a world-view.  But not here, I see Shamie’s vocals as belonging to the music.  His voice feels more of the music than the space a vocalist usually occupies in the music.  His voice remains at the same pitch, as he modulates louder and quieter, and vocoder.

On Felt, it seems like Suuns finally hit their stride, creating a consistency that has not always been there with their previous albums.  And it designed for multiple plays, preferably on a system that allows the bass and guitars to shake the foundations/car/your brain.