Eric Bolander: The Troubadour of Lexington 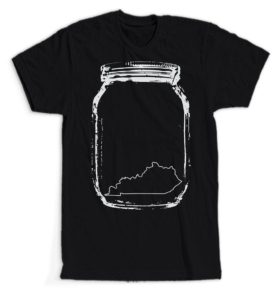 I met Eric Bolander last summer at a BBQ joint in McMinnville, TN.  There’s a venue upstairs and he was playing with a couple of other guys.  My friend, Scott, knew one of the other guys, and so introduced me to him, we talked for a bit and he introduced me to Bolander.  He’s a big, hulking man, covered with tattoos, the kind who should be intimidating.  But he’s not, he smiles and laughs a lot.  I never did get to hear him play that night, he was first on, and by the time we got upstairs from the BBQ joint, he’d played his set.  But his t-shirt was really cool, so I bought it (see the pic to the left).  And he threw in his most recent album as a bonus.  Thus, I was introduced to the music of Eric Bolander.

He’s from a tiny town along the Ohio River in Eastern Kentucky, Garrison (pop. 866), about 2 hours from Cincinnati.  But he’s lived most of his adult life in Lexington, Kentucky’s hip and cool college city.  Not only is he a musician, with a burgeoning career as both a solo artist and the frontman of Alcatraz Shakedown, he’s also an artist, working across a variety of media from visual arts to sculpture.  In his spare time, he teaches art.  In our household, his music, particularly his two solo albums, have been on constant rotation for the past few months.

Bolander was a relative latecomer to the guitar, his first love was art.  He did his BFA focused on painting.  He completed his graduate work at the Art Academy of Cincinnati, where he focused on sculpture and installation art.  He was drawn to larger pieces of art through his father’s work as a union man and carpenter throughout Bolander’s childhood.  The elder Bolander has a major impact on his son’s life prior to his untimely passing.

He was 18 years old before he picked up the guitar for the first time, but he was apparently a natural as ‘everything just kinda fell into place’ after that.  He joined a series of bands, playing both covers and originals, before joining the hard rock band, Modern Day Relic, in Lexington.  Modern Day Relic was one of the most popular bands in the city, so much so that even now, several years after the band split, its fans maintain a Facebook fan page.  Out of the ashes of that band, Bolander and the band’s chief songwriter and lead guitarist, Stephen Stump, formed Alcatraz Shakedown.  The new band plays a more psychedelic rock music, reminiscent to me of the Screaming Trees.  Alcatraz Shakedown released its début album, The Right Side of What’s Left, in 2014, followed by the EP Light the Cannons last year.  And in an interesting twist of fate, Modern Day Relic drummer, Ben Caldwell, drums for Bolander’s solo band.  As Bolander says, ‘Music has a way of leading people in and out of your life. Some of my best friends are musicians or music lovers. I love that part of this business.’

I asked him about his song-writing process.  His response:

A quiet room, my acoustic, a notepad, and my phone to record.  Many times I’m in my music room or office at home, but occasionally I’ll write some parts through jamming live with my bandmates.

When I write, I start with music 9 times out of 10.  I’m not your typical Bob Dylan-style writer; I admire those folks, but I just don’t think that way  I come up with a chord progression that sticks with me; then I think about how that makes me feel, what mood it conjures up for me, then I start humming and singing melodies over the music.  Once I get something I’m happy with, I’ll start putting words to the melodies; a theme usually presents its through this process for me.

The biggest influence for my writing is mood.  Sometimes it’s story-telling, but always involving [an] emotional response.

Bolander’s a lucky man, in that he gets to live and breathe art all day everyday, and there is a definite interplay between his music and his art.  While he works across about 10 billion different media, his favourite is printmaking, ‘screen printing to paper especially.  The final product has a certain character that’s hard ti mimic or replicate.  But, if you asked me this question tomorrow, I may say oil painting [laughs].  I’m fickle like most musicians,’ he laughs.

I also got the chance to ask him about two large-scale works that I found whilst doing some background research on his career before doing the interview that led to this story. 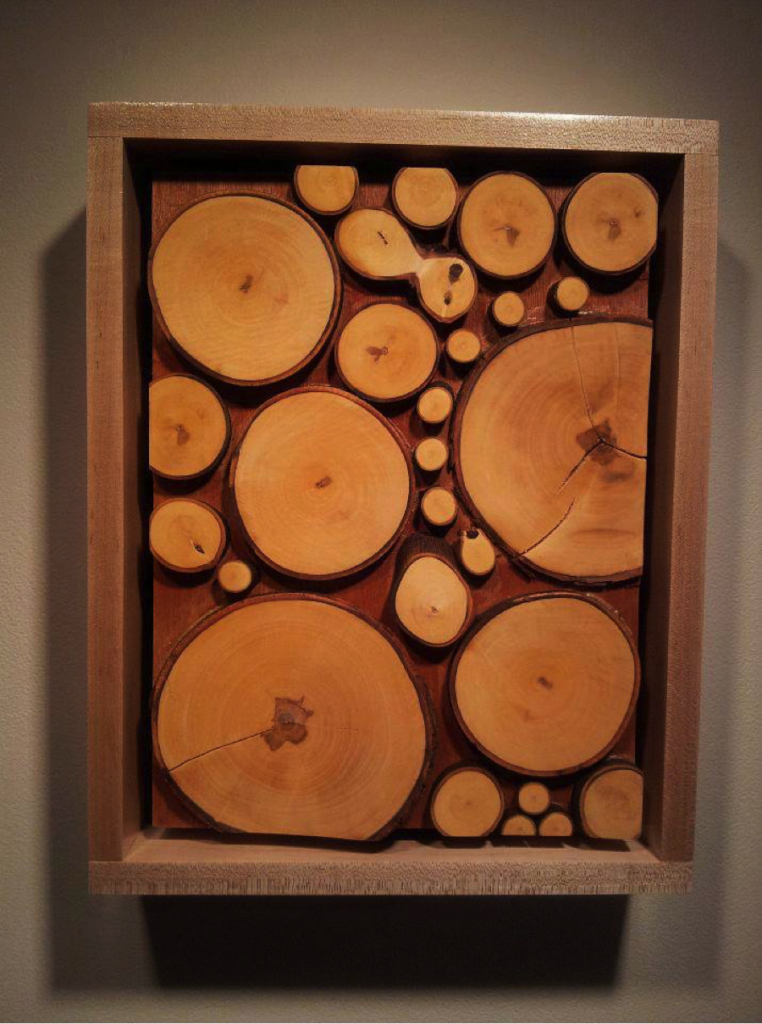 I was intrigued by this piece, as it draws together a collection of pieces of wood, obviously, but also given the depth of the feeling of the piece and the seemingly randomized design.  I particularly, though, just liked the idea of wood being the centrepiece of a work of art.  I have, amongst other things, been a woodworker, and the first thing you learn is that wood is alive, not dead.  And each piece is individual and unique.  Working with the medium forces you to forge a relationship with the wood, to respect it, and to take care of it as you meld it into something.  So, intrigued by the piece, I asked him about it.  It was the result of a tree that came crashing down in his then-girlfriend, now-wife’s backyard.

Says Bolander, ‘I just thought it needed to be made into something. I made a series of artwork from that tree.  The thought behind it was “why the material itself can’t be showcased as an artwork.”‘  The playfulness behind the idea for this piece is wonderful, and in many ways, continues the life of the tree into a new medium.  He gave it to a good friend of his, a woodworker. 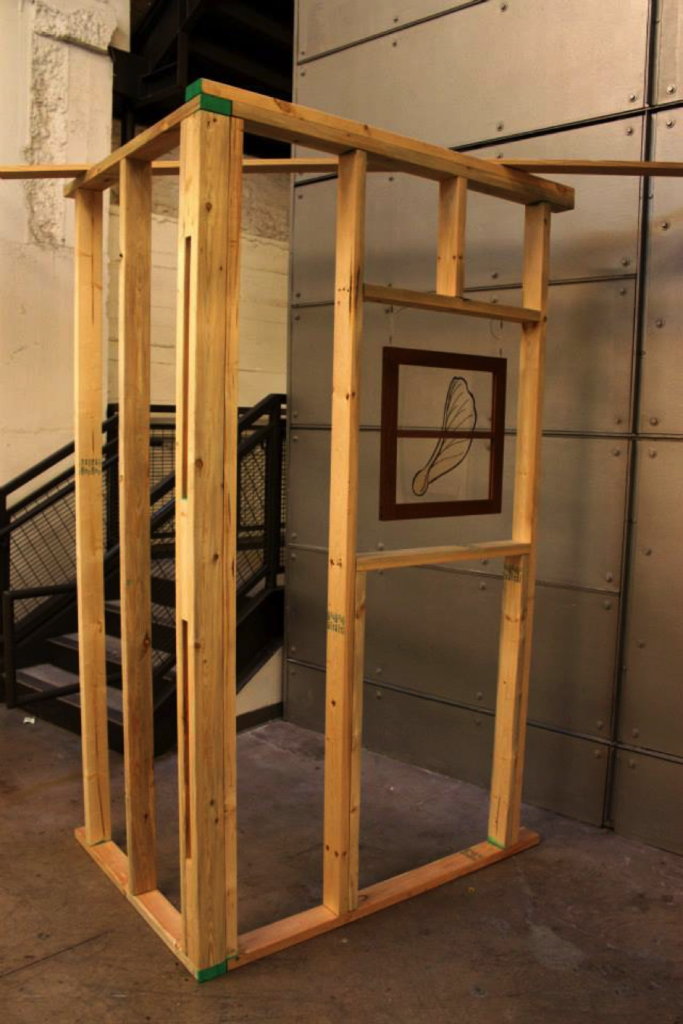 This second piece was fascinating to me for some of the same reasons.  But this is a more familiar usage of wood as construction material, and it is a more minimalist piece.  Says Bolander about this piece: ‘This piece is a dedication to my father [the carpenter].  It is a properly scaled, framed-up corner of a room with a hand-made framed pane of glass with an image of a maple seed (helicopter seed) screen printed on it.  This was based in his legacy as a builder mingled with fond childhood memories.’  This was an installation piece, so it was deconstructed following the show.  Bolander kept the framed work as a memento.

And so this is where his art and music overlap, as he seeks the emotional in his music, whether telling a story or singing a song of love.  And in his art, there is an emotional connection as well.

Bolander is a new father, he and his wife, Jeni, had their first child, a baby girl, in 2016.  Not surprisingly, he reports that it’s changed him. Plus, his baby girl is his biggest fan, so that’s a bonus.  An ideal day for him: ‘Time with family, seeing my daughter smile, and playing a show at the Ryman [laughing].  Maybe one day.’  If there is any justice in this world, Eric Bolander will one day find him on the stage of the Ryman Theater in Nashville, TN.