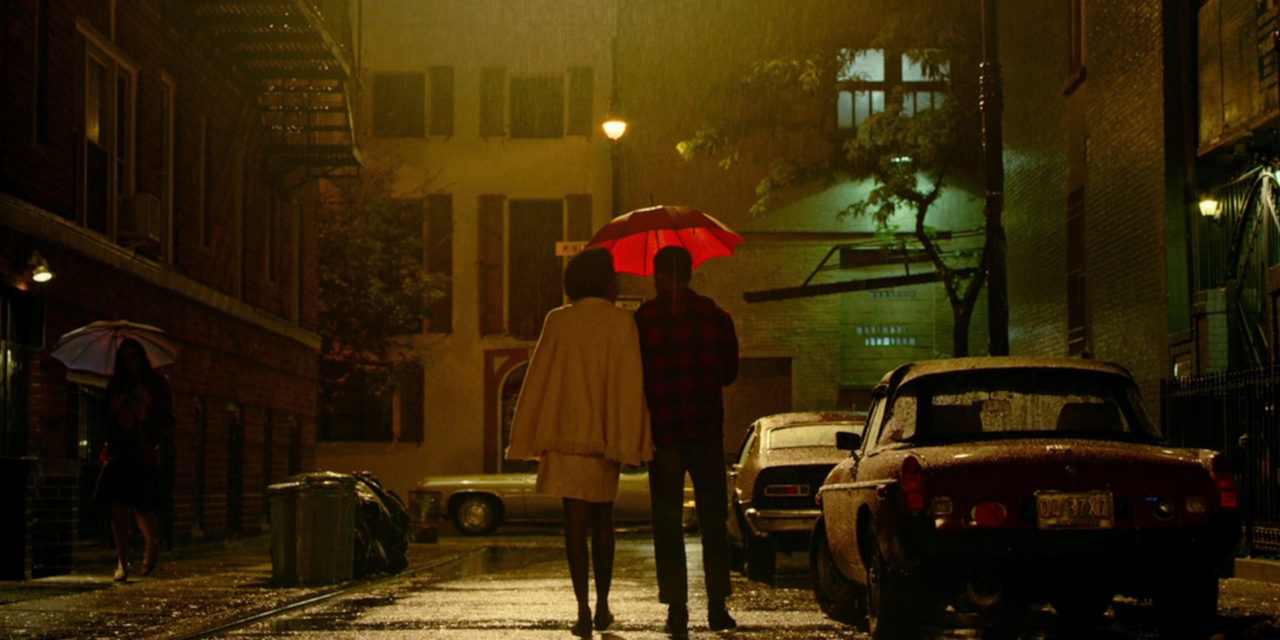 Barry Jenkins’s If Beale Street Could Talk is a gorgeous, devastating watercolor of a film, so simultaneously ethereal and tangible that it will ache inside you long after you leave the theater. It is the swelling of your heart, but also the lump in your throat. It is about memory and dreams, as they encounter a reality that sometimes feels so hopeful but is revealed to be uncompromisingly unfair and skewed. It is about being black and young in America; feeling so full of potential and ambitions, but caught inside an antiquated and violent system of racist restriction.

The narrative, based on the 1974 novel of the same name by James Baldwin, is about two partners, a nineteen-year-old girl, Tish Rivers (Kiki Layne), and her twenty-two-year-old fiancé Alonzo Hunt, who goes by “Fonny” (Stephan James). They have been best friends their entire lives, and when they are old enough, their friendship grows into a beautiful, sincere love. Fonny, who is a sculptor residing in New York City’s West Village, is excited to find a loft where he and Tish can raise their future family. But then he is arrested, by a white cop with a pre-existing vendetta against him, on charges of raping a woman. Fonny is innocent, but he is sent to jail to await a trial that keeps being postponed, while Tish discovers that she is pregnant, and has to begin raising their family without him.

As a social justice argument, the film clearly soars; but its articulation of this necessary claim is made so creatively and effectively through the expectation of genre conventions. If Beale Street Could Talk is a stirring, moving, intimate love story—a love story that should not have to turn into another genre. But it does—it is forced to sidetrack into a legal drama because of an external, racist justice system that inserts itself into the love story and ransacks it. So clearly does this show how the broken legal system in the United States ruins lives, families, and, bonds—the kinds of things we watch grow in other films in the “love story” genre without worrying that one of the parties will be falsely imprisoned. The film is about being young, black, in love, and in New York City in a dreamy 1970s, and it is about the reality that existing in these ways means being automatically targeted—unfairly, unjustly, and unexpectedly.

Tish’s family is incredibly supportive of their daughter, their future grandchild, and their (surrogate, soon-to-be) son—the scenes of the family together provide the film with gorgeous community and warmth. Tish’s fiercely caring older sister, Earnestine (Teyonah Parris) gets her acquaintance, a young (white) lawyer named Hayward (Finn Wittrock) to work on Fonny’s case, while Tish’s kindly father Joseph (Colman Domingo) and Fonny’s father Frank (Michael Beach) do whatever it takes to rustle up the money to pay for his defense—and to pay to track down the rape victim, an immigrant named Victoria Rodgers (Emily Rios), after she flees home to Puerto Rico. And Tish’s mother Sharon (a scintillating and ever-sincere Regina King), who I swear has pure goodness shining in her eyes, travels to Puerto Rico herself, to track down Mrs. Rodgers, to beg her to confirm Fonny’s innocence. Meanwhile, Fonny’s very religious mother, Mrs. Hunt (Aunjanue Ellis) and two stern sisters (Ebony Obsidian and Dominique Thorne) are less supportive, believing that Fonny’s artistic and secular nature has led him astray, and ultimately, to sin and punishment.

If Beale Street Could Talk is a film about incredible, wide-ranging support or even just moments of “doing the right thing” from many good people (which manifests in delightful cameos from very famous actors). It also reveals, heartbreakingly, how none of this actually matters to a racist justice system. Fonny and Tish have wonderful friends, including Daniel Carty (Brian Tyree Henry), a haunted young man who has just served two years in jail for stealing a car that he did not steal, and Pedrocito (Diego Luna), a waiter at a nearby Village restaurant who knows they’re good to pay him back for their meals that they have to temporarily eat for free. They make a new friend in Levy (Dave Franco), the Jewish landlord of the loft where they want to live—the first white landlord not to turn them away (in one of two scenes in which the West Village Jewish community is unflinchingly supportive of Fonny and Tish’s rights to live without harassment or discrimination). And in Puerto Rico, Sharon is able to convince the man who is hiding Mrs. Rodgers, Pedro Alvarez (Pedro Pascal), to make contact between them, to help save Fonny’s life. Moreover, Hayward, the compassionate lawyer, is enlightened by his experience, terrified for and working hard to try to help his client. But the support of all these people, including a powerful white male ally, is not enough to undo an arrest by one resentful, prejudiced white policeman.

Jenkins’s reverence for Baldwin’s prose is readily apparent in this adaptation—many of Tish’s narrations in voiceover are gently lifted straight from the novel. The general impression is that Jenkins, knowing a masterpiece when he sees it, does not want to remove Baldwin’s voice from the story, considering how much of the story’s thematic essence and artistry that voice provides. This gives the film the feeling of being a visual and sonic illustration, a companion to the novel, rather than a fully autonomous piece of art — but (since I am a stickler for narrative fidelity myself) I like this about the film. A lot. I think it reveals how films and their literary progenitors may work together, and that Jenkins’s “if it’s not broken, don’t fix it” attitude, if I may put this so reductively, helps make the practice of adapting a novel to film into a collaborative, generous, and humble practice of love, rather than a desire to possess, harness, or remake in one’s own image, a thing of existing beauty. Jenkins is here to paint Baldwin’s book.

And paint it he does. Basically, every one of the 171,360 frames, give or take, that compose the film could be mounted on a gallery wall—so gorgeous is the film’s constant use of color, its chiaroscuro, its many rain-slicked cobblestone reflections, its use of warm, golden, shafted light. The palettes are gorgeous, complimentary, and bold—and they are illuminated brightly like stained glass (an effect which itself symbolically underscores the tragic and unsung martyrdom of so many black men in America). The music is also magnificent—heartbreaking string instruments sighing and weeping.

If Beale Street Could Talk is a beautiful, shattering film—a collection of misty morsels of love and hope that are set to stew in the garish lights of interrogation rooms, jail cells, and visitation rooms. In its just-under-two-hours, it gives us a taste of beautiful possibilities, and a drop of what will be, for this damaged family, everlasting pain. With his film, Barry Jenkins has provided a visual and emotional glimpse of the great tragic tradition of American life. His film is endlessly poetic, but it’s not poetry—it’s prose from a narrative that goes on and on.