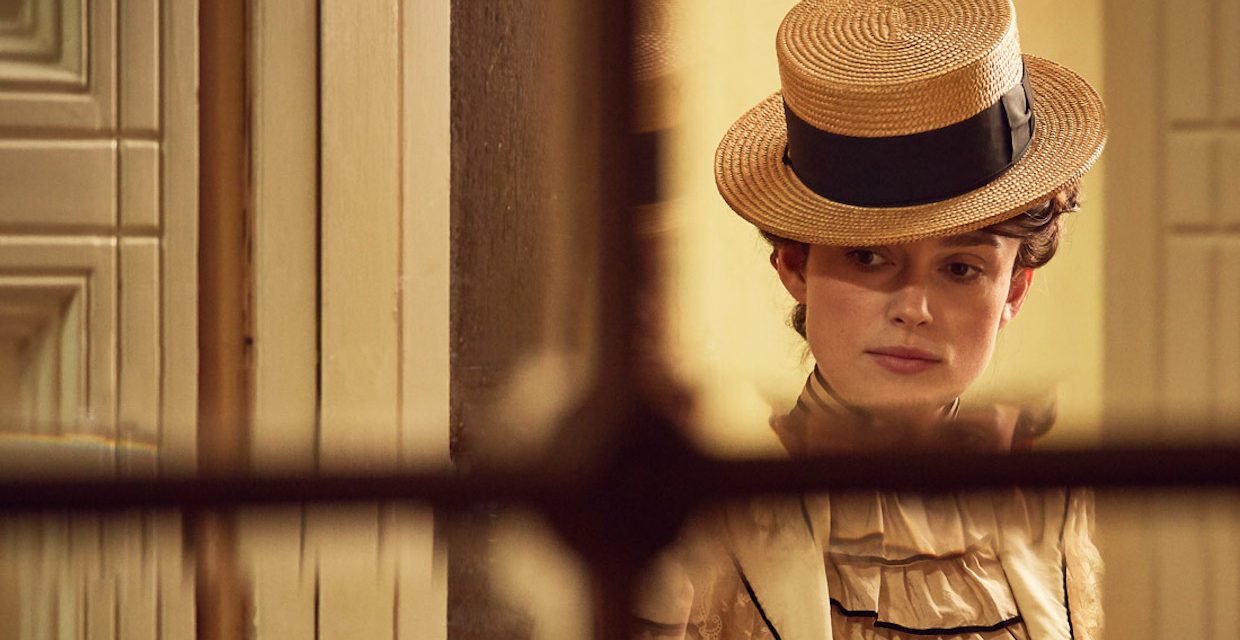 The font chosen for the title fade-in of Colette is handwriting— flowing, quilled script. It is brisk and legible and slightly swirly. I’m not a graphologist, so will add only that the most noticeable aspect of this word, in this orientation, is its back half. There are two ts, next to each other, and both their stalks are crossed with a single horizontal line that floats slightly above their tops.

This handwriting belongs to the film’s protagonist, Colette (Kiera Knightly), who at this point in the film (the opening credits) is unknown to the literary world, but who will eventually become one of the most important writers of the 20th century. We don’t conclusively know that this penmanship is hers until later—in a scene when she, still young, signs her own full name, Sidonie-Gabrielle Colette, on the title sheet of a novel she is writing. Here, she is penning this novel at the request of her new husband Henry Gauthier-Villars (a transformed Dominic West), a mustachioed slug fifteen years her senior whose own tremendous literary career consists of churning out novels by ghostwriters under his own popular pseudonym, “Willy.” Financially parched and creatively impotent, he asks his young wife (who is bored with the pretentious salons of Paris and longs for the quiet beauty of her childhood home in Burgundy) to write something for him. She does: “Claudine à l’école,” a semi-autobiographical pastoral about her own teenage years in the country. And it becomes a huge hit, under Willy’s nom de plume.

The film is a jubilant celebration of proto-modernist Paris (spanning 1893-1908). Directed by Wash Westmoreland, it passionately and brightly chronicles the first leg of Colette’s prolific literary career, in which she becomes her household’s primary breadwinner without receiving her own compensation or credit. This title shot, in which the word “Colette,” inky and large, fades into the frame, reveals a twenty-year-old Colette in her bed at her family’s home, attempting to oversleep despite the streaming golden sunlight and the calls from her mother (Fiona Shaw). This cursive presentation of her name at the very start of the film immediately foreshadows what will become the film’s driving force: constant assertions of her own name, story, identity, and livelihood, in the face of total patriarchal erasure.

This is, of course, a meaningful and high-stakes prompt in the autumn of 2018—though, most of the time, the film does not give Colette a feminism too anachronistically ahead of her time. Colette is pretty firmly a period piece (sometimes cloyingly so; there are numerous moments of loud small talk in which characters name-drop obvious historical details, like the construction of the Eiffel Tower, to place the film solidly in its moment). But its period-ness is productive. We can observe a woman within the social confines of her own day overcome relevant obstacles. To have rewritten Colette’s life to address these issues in a modern context would have been to rob a strong woman of her own story, struggles, and triumphs. Finding the threads of internalized misogyny that link Colette’s era to today is the audience’s own task. For example, Willy, a pleasant and likeable professional man, reveals himself to be the very kind who might cry and yell about his own vices during a Supreme Court hearing and still get the job. Colette’s speaking to a contemporary event that had not happened (both at the fin-de-siècle and with regard to the movie’s release date) reminds us of the trajectories of women’s advancements and the histories of a social preference for male contribution.

The bulk of the film’s conflict, and part of its surprisingly unsettling aftertaste, results from its chief villain, Willy—whose precise villainy is compounded by his being alternatively charming and pitiable, likable and boorish. He is hardly one-dimensional (this is not a joke about his ever-increasing paunch) in his particular brand of patriarchal oppression, and this obviously makes him all the more believable as an oppressor. When Colette catches him flirting with a woman, he tells her that, as a member of the “weaker sex,” he does not have the resolve that she has. This is classic blarney, but it proves that locating his true wickedness requires hermeneutics. Willy’s use of flattery-based submission and (when caught disrespecting women) pathetic excuses makes him buffoonish enough to dismiss. This is where his power lies.

Westmoreland and West approach Willy quite smartly; his more explicit duplicitousness, too, is for a long time played off as mischievousness. After encouraging Colette to begin an affair with an attractive heiress (Eleanor Tomlinson), he pursues the heiress as well, and both husband and wife have the same mistress. When Colette finds out, she is mad not that he cheated with her own partner but that he lied about it. Willy later locks Colette in a room with her notebook to get her to write another installment, and though she screams and attempts to break down the door, she eventually finds herself writing, and enjoying it. Even the real Colette had said that she would never have become a writer if it were not for Willy. This is not to complain about how the film represents a nineteenth-century woman’s complicated effort to become the agent of her own fate, but to point out the film’s construction of a timeless evil: a man who demands the deference and belittlement of women in order to provide them with opportunities and fame.

But the film also offers him the correct punishment: for the lead female to forget about him and lead a full, successful life on her own. The real Colette is an excellent muse for a film that wants to focus on female contribution; her own accomplishments were incredibly plentiful. And the twin connected ts in Colette’s presentation of her own name constitute the first of the film’s many aesthetic monuments to her developing duality: she is both creator and muse, named and anonymous, protagonist and writer. She will make two homes, one in Paris and one in the country, and will soon start to realize a new dimension to her own sexuality as she begins affairs with women, including Missy (Denise Gough), a noblewoman who chooses to dress as a man. (Other pairings that define Colette include her stubbornly-worn twin braids and her eventual decision to wear pants.) But with all of this, the film smartly does not suggest that she is leading a double life so much as that she contains within her more than a single life’s potential. The film is content to slowly peel back each of her petals as time goes on, moving towards a center that itself keeps expanding. She is a veritable multiplication table of a character.

That her handwriting is the first thing we see when the film begins (again, floating over her form in bed) means that the film is asserting her complexity and power even at points when she is not threatened by forced anonymity and masculine excision—the film remains determined to remind its audiences that its heroine is not shaped into “Colette” by masculine forces. She is already Colette when she’s by herself, unknown, and asleep.