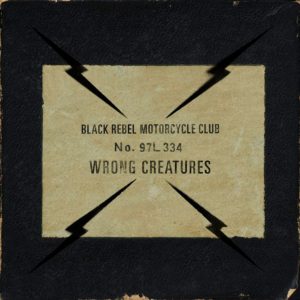 Black Rebel Motorcycle Club are named for Marlon Brando’s gang in The Wild One.  It’s not their original name; forming in San Francisco in 1998, they were originally called The Elements.  But the discovery of another so-called band caused the name change.  BRMC were a trio, originally comprised of Peter Hayes (vocals/guitar), Robert Been (bass/vocals) and Nick Jago (drums).  Jago left in 2008 and was replaced by Leah Shapiro.  Hayes had been a member of the Brian Jonestown Massacre before forming BMRC, and maybe it’s for this reason, I have always associated the band with the Massacre and Portland’s Dandy Warhols (this comes from the long-standing friendship/rivalry between the Massacre and the Dandys, documented in the 2004 documentary, Dig!).

Anyway, BRMC’s eponymous début was a blast of fresh air in 2001, mixing shoegaze, rock’n’roll, psychedelia, and the Jesus & Marychain, it became one of my favouite albums of the era. It wasn’t just Hayes’ vocals, which are deeply reminiscent of JAMC’s Jim Reid, it’s also the music, which sounded blissed out and loud.  I lost track of the band around 2005 or so, moving onto new bands, new forms of music, whatever.  So I haven’t heard anything they’ve done since their album, Howl, which I kind of thought to be more of the same and repetitive.

So Wrong Creatures is the first new music I’ve listened to from BRMC in over a decade.  I like it.  I don’t know if it’s nostalgia for my misbegotten youth, or I just like this kind of music.  Could be both.  Wrong Creatures sounds like an evolved version of their early years, more fleshed out, moodier.  There seems to be more depth than I’ve heard from them since the début album.  Hayes has grown into his role as frontman, he sounds older, more self-assured than he did as a brash 25-year old.  I guess this happens to all of us.  This isn’t ‘dad rock,’ the utterly stupid epithet the hipsters over at Pitchfork use for any music made by men that reeks of maturity.  The band’s bio on their official website says that they are labouring under a life sentence to rock’n’roll.  No doubt.  This is a trio of fuzzed out survivors of that San Fran scene of the 90s carrying on their intergalactic space trip.  In short, this is good shit.