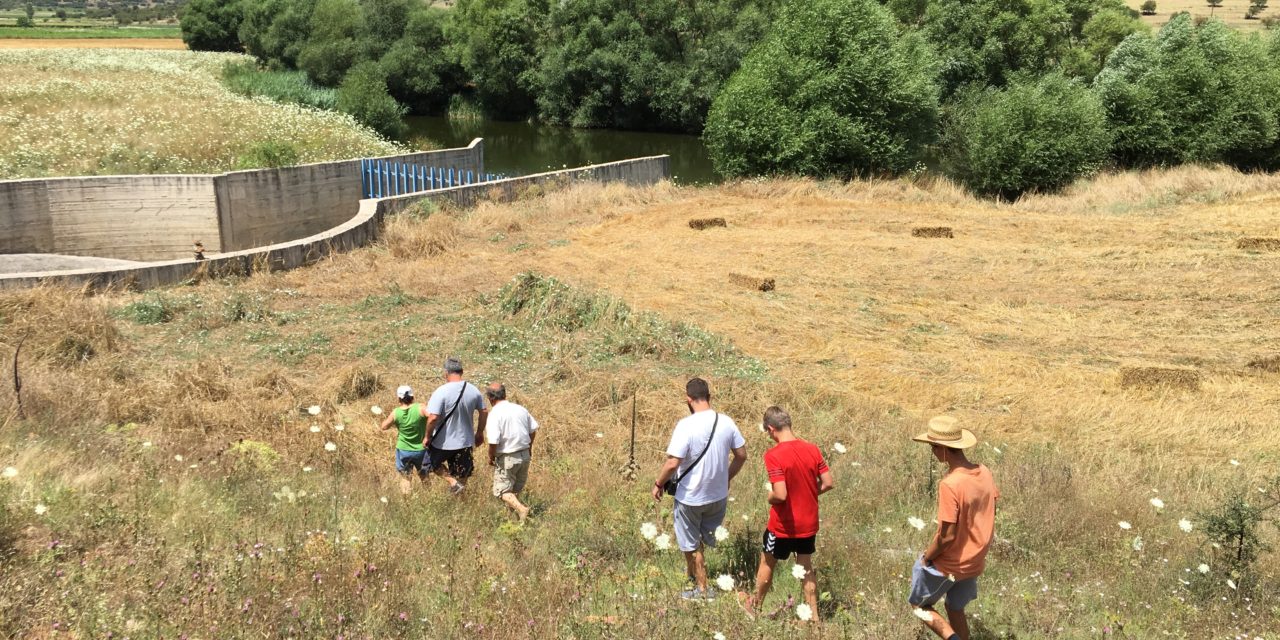 Elsa said it once or twice as a joke: “The Germans are coming back to Psari! Och!” The “Och!” was supposed to express fake fear. When they had come before, in the early summer of 1944, the fear had been well grounded. The village had been occupied, a woman raped, and the occupiers chased out by the Resistance. Then the German army had come back, the village had been burned to the ground, along with all its crops, and those inhabitants who had not fled (the usual number given is 5) had been shot. Those who hid in the surrounding mountains came back to years of extreme hunger and the barest subsistence.

Our house, where Elsa’s grandfather was born, was not rebuilt until 1948-49. The same stones went into its walls. Today, some of the stones are still black from the fire. We make sure to point them out to visitors.

The Germans who were coming this time were Thomas and his family. I had never communicated with Thomas, grandson of one of the invaders. I didn’t know his last name. (Now I do.) All the arrangements for his visit had been made by Giannis, Psari’s self-educated historian and tireless custodian of its rather impressive (for a village of 385) website (www.psarikorinthias.gr). The arrangements were made in English, which to his regret Giannis never stopped to learn. When Thomas, looking for evidence of how and where and when his grandfather died, stumbled upon the website and sent a message, Giannis’s son did the translating while Giannis himself did the even harder moral labor. Now, in July of 2018, Thomas had come to Greece, partly for a normal vacation in the sun and partly to see the fatal landscape for themselves. Giannis’s son was again there to translate. Strictly speaking, then, Elsa and I weren’t needed. But we wanted to be there. Not just to see, for the first time, the sinkhole where the German soldiers captured by the Resistance were thrown in. For other reasons as well.

Thomas had never known his grandfather. How could he have? His mother was still a baby when her father disappeared. It was Thomas’s mother who seemed to be the source of his compelling interest. While Thomas was growing up, she told him that she had never been informed by the authorities of her father’s fate and for all she knew he was still alive somewhere. She seemed to believe he was. I don’t know what else may have inspired Thomas to begin digging, a few years ago, until the Red Cross had satisfied him on the main point: his grandfather had died in Greece. But further details were not available until he dug some more.

Thomas’s mother, the most directly interested party, was not there last month. She was at home tending to her husband, who was in bad health. Thomas was accompanied by his wife, Birte, and her mother, Dagmar, in a lovely flowered dress, as well as two children—her daughter, by her first husband, and a son by a previous marriage. The girl, 15 years old, seemed pleased to be practicing her English on Giorgos, Giannis’ tall and handsome translator son. The original plan had been not to bring the children. Thomas was afraid of the hostile reception the family might get. But he had been disarmed by Giannis’s obvious kindness, and there the kids were.

The day the Germans arrived we had a pleasant, unfocussed conversation in the miraculously shady yard of Theia Eleni, Giannis’s mother, below the garden where she works every day. I told them how extraordinary Giannis had been in maintaining and adding to the village’s collective memory. (I asked his son not to translate that part.) I also told them that my father had been a bomber pilot in World War II and had bombed German cities, including Bremen, where they were from. As I had come to realize only when I was no longer a hero-worshiping child, that meant bombing civilians. I had business of my own with these issues of violence and its memory.

The next day we visited the spot outside the village where the Resistance killed half the Germans and captured the rest. Psari calls it the “Makri Lithari,” or “Long Stone.” Apparently, the Germans, fleeing along the road, had climbed the desolate hillside and desperately tried to take shelter behind the enormous rock formation. They didn’t know that another part of the Resistance had come over the mountain behind them. The fight was over in minutes. Staring at the bare, inhospitable landscape, Thomas said, “What business did we Germans have here?” 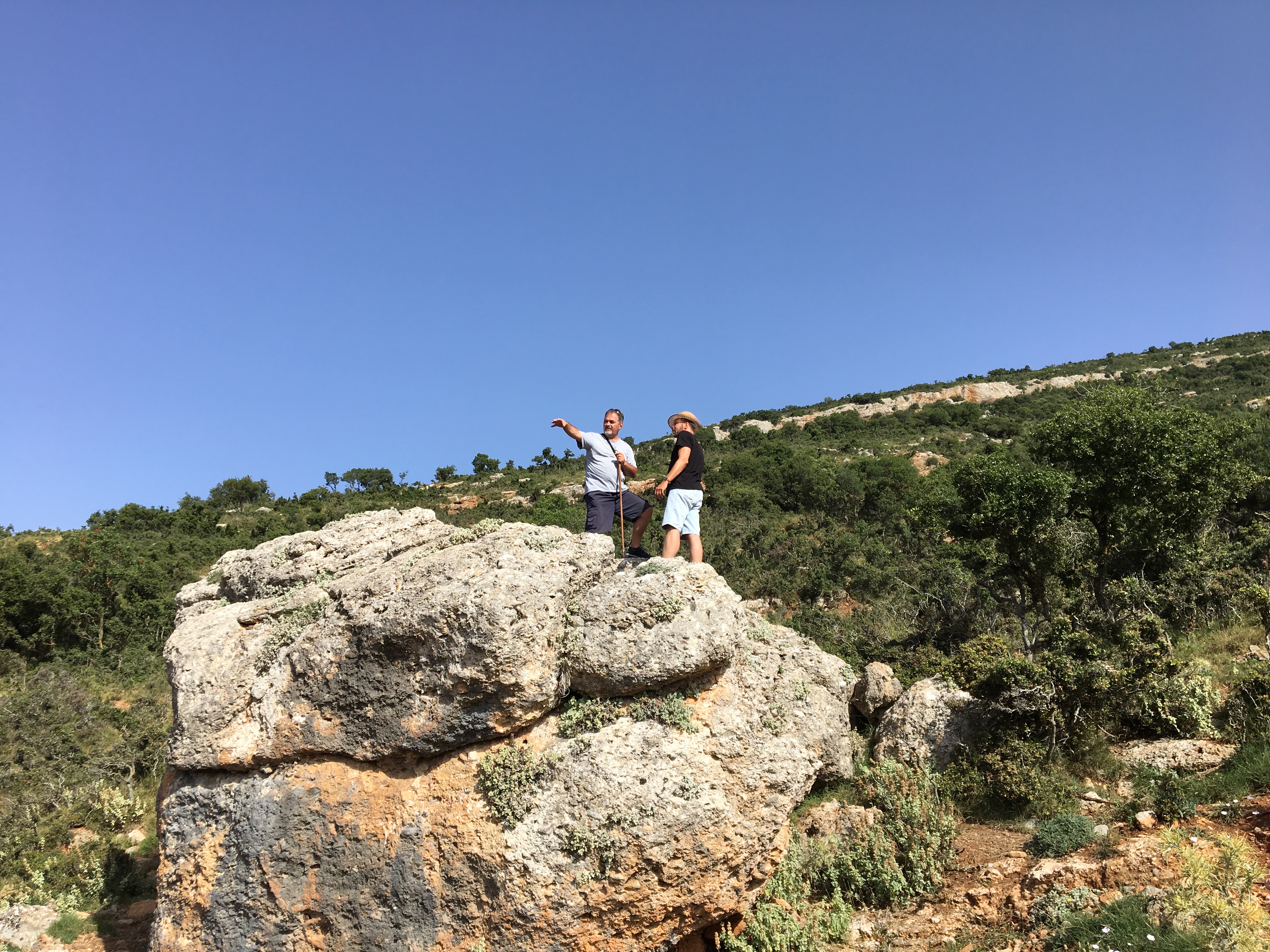 We stood on the rock for a while. As we came slowly down the hill, careful not to slip on the loose stones, a woman came out of a stable that was the only sign of habitation anywhere nearby. She was carrying a bottle of tsipouro, the local grappa, and a tray with glasses and a plate of local cheese. She had apparently heard that the Germans were coming, and delayed her morning departure to take care of her sheep so that she could offer hospitality. There was nothing exaggerated or, to my mind, conventional in her expression. After we had eaten and drunk, she went back to the stables and a minute later her truck roared off. I detected no hint of impatience in the time she spent standing in the shade with us.

Our next stop, across the valley, was the large cave called “Spilia tou Godzi” where the captured soldiers were held that night. Giannis said that when they were cornered behind the Long Stone, the Germans had shot off flares, hoping to alert their comrades on the other side of the mountain. The Resistance didn’t know whether the flares had been seen or not, so they crossed the valley to hide from possible pursuit. I imagine they also did not want to leave behind more bodies in plain sight. The captured Germans, sixteen of the original 32, were tied up wearing nothing but their underwear. The Resistance had uses for their uniforms, as it had for their weapons. Dagmar’s flowery dress did not seem ideal for fighting one’s way through the brambles and up the slope to the mouth of the cave, but she was game and she made it, smiling.

Finally, we drove further up the valley, away from the village, to the house of a man who knew how to find the sinkhole. The Gatsiopoulos family is one of the last independent cheese- and yogurt makers in the area; most of the shepherds sell their milk to a local manufacturer who is also suspected of helping monopolize the village’s water supply. (The water supply, dwindling and no longer deemed drinkable, has been an issue for years.) We were treated to cold water and fresh cheese. Then those who could fit piled into the back of the truck and headed out. At first it was highway, then it was a dirt track, with bushes pressing up against it. One patch was full of blueberries that looked almost supernaturally blue, but we were told they were not yet ripe. 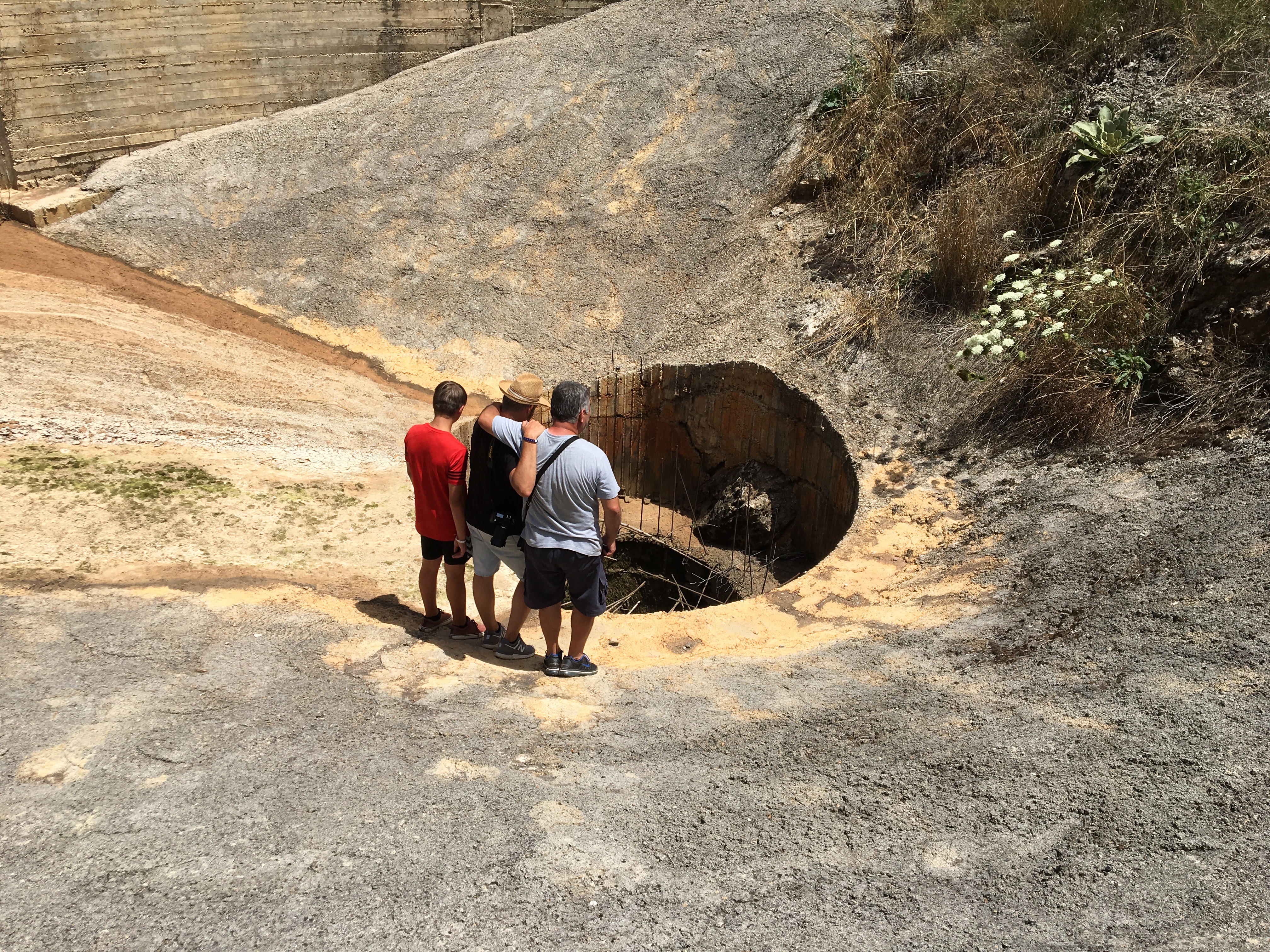 The area of the northern Peloponnese where Psari is located is mountainous. A great deal of water flows down from these mountains, much of it underground. The sinkhole, we are told, is an effect of several underground streams converging. The spot seems magical– deeply green, with trees and a lake, blocked off now by a small dam. The sinkhole itself is surrounded by concrete and studded with rusting metal bars. The concrete wasn’t there in 1944. But standing at the edge you can still look down and see what they would have seen: an uneven, rocky-walled hole that quickly goes dark and seems bottomless. It would have been a beautiful place to die, as someone remarked, if that sort of thing matters.

Thomas did not talk a lot about what he was thinking or feeling in Psari. Like his wife and mother-in-law, he was friendly, straightforward, and articulate, but he did not seem eager to broach the largest subjects. In exchanges with Giannis before the visit, he had expressed shame at the German occupation of Greece during the war and also at Germany’s treatment of Greece during the recent financial crisis. About the manner and meaning of his grandfather’s death, he said, very naturally, that he would need time to digest.

As it happens, the Germans had nothing to fear from the people of Psari. Elsa and Giannis did interviews with some of the few people left who lived through the events of July 1944, and what they discovered was an extreme unwillingness to blame the Germans. If those interviews are representative, the inhabitants of Psari tend to feel shame about the manner in which the captured German soldiers had been executed, if not by the fact of the execution itself. They tend to distance themselves from the Resistance and eagerly, seemingly unintentionally run together the atrocities committed by the Germans with misconduct by the Left, whether in the resistance to Germany (much of the Resistance was led by the Left) and in the Civil War which followed the departure of the Germans. The feeling seemed to be that it all balanced out. Giannis himself, whose extreme moral generosity and graciousness were apparent in everything he said, seemed to want to push one dignified 92-year-old man he questioned into taking a more polemical stand. After all, he said, what were the Germans doing in Greece in the first place? They weren’t here on a tourist excursion, were they? 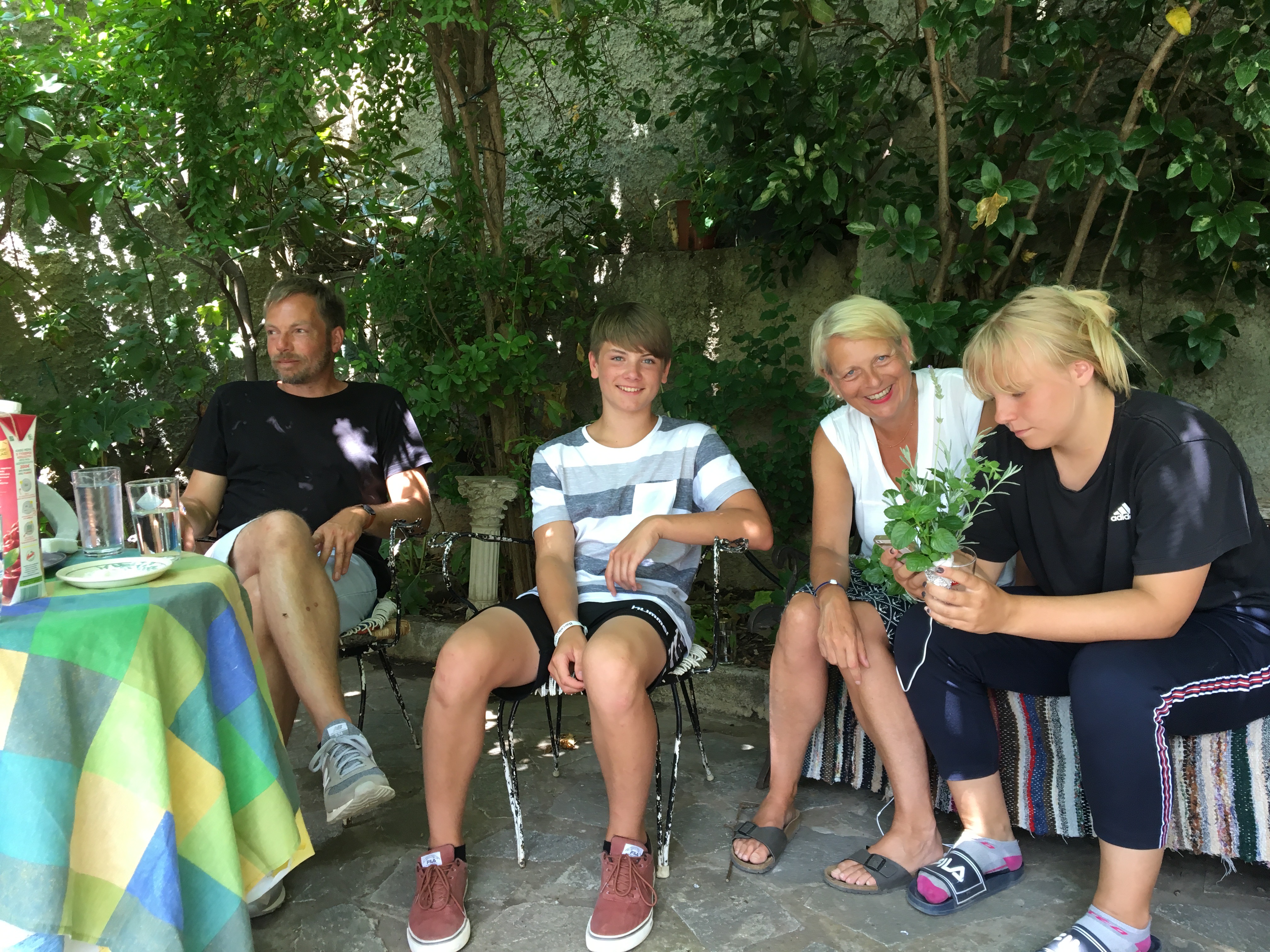 That seemed a large thing to forget. We could not help but wonder how much of the ethical magnanimity we saw and felt around us might be the effect of a certain political perspective. Was it that they, like me as an American, knew that their country too had much to answer for? Or was it the higher wisdom dictating that whatever happened then, the passage of time changes and has to change how you feel about it. But in that case, should we make such efforts to keep the memory alive? And if we should nevertheless remember, what is the right way to remember?

The Nazi offensive against the Greek resistance that eventually led to the burning of Psari created at least one atrocity that has continued to loom large in the history books: the massacre at nearby Kalavrita and in the surrounding villages, which happened six months earlier. It is estimated that some 700 people were murdered. There is a play by the extraordinary French Resistance writer, and survivor of Auschwitz, Charlotte Delbo. Mikis Theodorakis dedicated his “Requiem” to its victims. More recently, however, when efforts were made to get Psari added to the list of so-called “martyred villages,” it was representatives of Kalvrita, we learned, who blocked the initiative. The logic of memory works in strange ways.