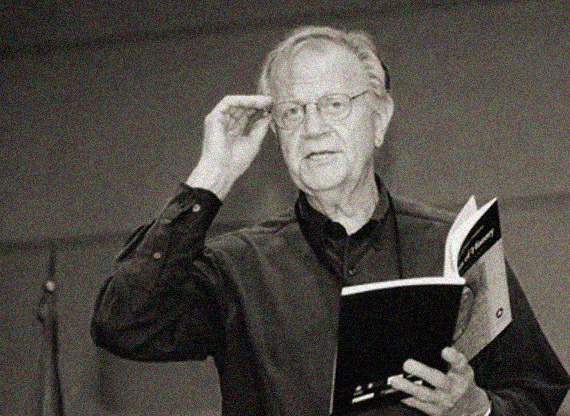 Hayden White has died, and it feels personal. I didn’t know him—I met him just once at a conference—but he had, and has, a huge effect on my thinking about history, about method, about writing as such.

Last semester I taught both the big book, Metahistory (1973), and the essay collection, The Content of the Form (1987), in a course called—wait for it—Historiography, the History of History. I matched White up against Karl Lowith, the Heidegger student who, like Erich Auerbach, wrote a great book while on the run from the Nazis.Meaning in History (1949), it’s called, and in it Lowith insists that our need to narrate historical circumstance, to render random sequence as impending significance, is fundamentally religious, in the most urgent sense. How to redeem all this suffering, how to turn a slaughter bench into a hymn, how, God help us, to read this tragedy we call the human condition as a comedy?

Lowith worked backward from Hegel and Marx toward the Bible. In Metahistory, White worked forward from Hegel, enlisting everybody from Auerbach and Barthes to Jakobson and—hello?—Kenneth Burke. That borrowing is worth a book.There is no better reading of Hegel than the first 131 pages of Metahistory, unless you want to get all technical and philosophical, and consult Harris, Riedel, Pippin, Zizek, et al. I disagree with White’s reading of Marx, of course, but that’s neither here nor there. I think he got Hegel right because he took Burke seriously.

For my purposes, however, the most important and formative of White’s thoughts on what historians—and all the rest of us—do are contained in the lead essay of the 1987 collection. It’s called “The Value of Narrativity in the Representation of Reality,” originally published in Critical Inquiry.

Here White calmly makes and proves three outlandish claims. First, narrative is unnatural. Real events do not take the form of stories, they just unfold, but we, us moderns, demand beginnings, middles, and endings, and treat different renditions of past time as primitive, quite possibly useless.

White used the Annals of St. Gall, ca. 709-1072, a meticulous record of nothing but misery—“Hard year and deficient in crops,” “Flood everywhere,” and so forth—to demonstrate that medieval chronicles were more realistic than what we take for granted as proper renditions of the past.

Second, the border between fiction and non-fiction is porous because, in imposing narrative form on past events, we are at least reinventing it. Go further. We’re actually changing the past by retelling it.

Third, modern historical consciousness requires the kind of moral and legal agency on the part of “the people” that can’t appear until nation-states nominate citizens and enforce their claims on their human rights. Before then, who knew, who could tell this story? Where were “the people”? Or, following Hegel and Marx, where were those modern individuals who populated the new space of “civil society”?

When I met White at that conference, 25 years ago, I said, “You remember Marty Sklar, he was your TA at Rochester?”

“Jesus Christ, of course I remember him,” he exclaimed—he had a baritone voice that carried with operatic effects—“I learned more from him in a year than from any colleague I ever met!”

“Ah, I was his TA for a year at Northern Illinois.”