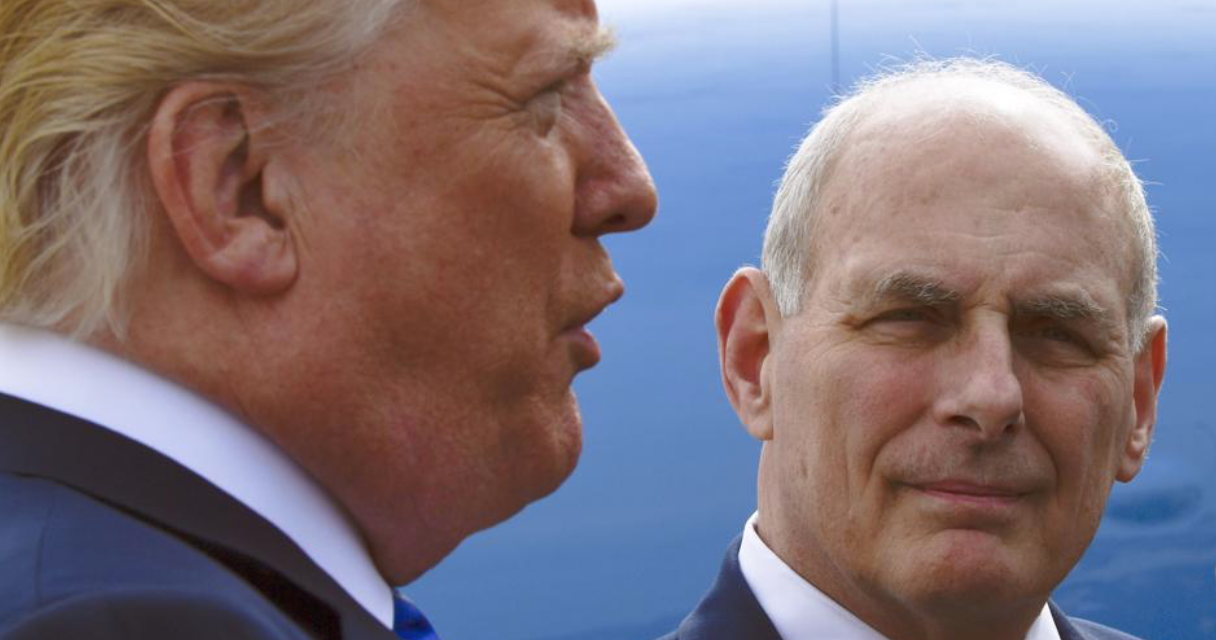 Waiting for John Kelly? He cannot save the Republic from what ails it.*

In the New Yorker, John Cassidy refers to the story that Trump routinely refers to deceased and injured members of the US military “suckers” and “losers” as a “controversy” and calls on John Kelly, the General who served as Trump’s Chief of Staff, from 2017 to 2019, to settle it by saying “publicly what he knows.” But it is not a “controversy.” It is a well-reported and multiply confirmed story that the Administration denies. And John Kelly is not the one to settle it.

We know this because of how he tried to help the last time.

In mid-October, 2017, Trump called the family of one of the four American men who died in a military action he ordered in Niger, but Trump’s words did not console. Trump said to Myeshia Johnson, the widow of deceased Sergeant La David Johnson that ‘he knew what he signed up for!’ When she got off the phone, Myeshia Johnson cried and said: “He didn’t even know his name. He kept calling him, ‘Your guy.’”

The words offered as consolation were offensive because they are the kinds of words men and women in the armed forces say to each other, maybe, but not to the bereaved. Trump had taken them from Kelly, who had shared with the President the story of his own son, who died serving this country. Trump was impressed by the words. He probably thought if he stole the words, he would sound like Kelly and not like a draft-evading, cavalier, military wannabe with fake bone-spurs.

But “he knew what he signed up for” are not the words Kelly would have said to his own wife, Karen, about their lost son when, as he later said, he went upstairs to break her heart with the news of their son’s death. And so when Trump stole the words for himself, to say them to the wrong people, at the wrong time, in the wrong way, they felt foul. And he was criticized and called out for it.

Back then, Trump turned to Kelly, who had been on the call with the Johnson family, to back him up. And Kelly obliged. He said the call was “a respectful expression of presidential sympathies.”

But Congresswoman Frederica Wilson of Florida had heard the call too. When the call came in, she was with the Johnson family, waiting with the widow and her children on the tarmac for the plane carrying Sgt. Johnson’s remains home for burial. Wilson confirmed the new widow’s account of the call and said that she, too, was offended by what the president said. “‘So in other words, when you sign up when you go into the military, you are really signing up to die,’ she said of the president’s comments. ‘That is not what you say to a grieving widow, a woman who just learned that her husband cannot have an open casket funeral. In fact, she will probably not even be able to see his body.’”[i]

Now Kelly was in deep. He had called the call “respectful” and “presidential,” expecting no rebuttals. And here was Wilson contesting his claim. He doubled down. He accused the congresswoman of politicizing the matter and described her as “listening in” on the phone call, as if illicitly. But the call had been on speakerphone and Wilson was not listening in but providing support to a grieving family in her community, herself in mourning, too, for a man she had known ever since he was in elementary school and took part, as a child, in a mentoring program she started.

Soon, back in 2017, just as now in 2020, Sarah Huckabee Sanders chimed in, too. She confirmed the President’s claims but this just further fed the fire. The back and forth continued until, finally, trying to put an end to the story, Kelly moved to discredit Wilson.

He had another story about Wilson. He had been “stunned,” he said, two years earlier by public comments she made at a ceremony dedicating a new building in Florida to two FBI agents who were killed on the job. “And a congresswoman stood up, and in a long tradition of empty barrels making the most noise, stood up there in all of that and talked about how she was instrumental in getting the funding for that building, and how she took care of her constituents because she got the money, and she just called up President (Barack) Obama, and on that phone call, he gave the money, the $20 million, to build the building, and she sat down,” he said. “And we were stunned, stunned that she’d done it. Even for someone that is that empty a barrel, we were stunned.”[ii]
It was a turn to the security blanket of whiteness, which deflects attention from everything else. In this moment, we see it again: today, the day after the losers and suckers story dominated the headlines, Trump’s big announcement is that racial sensitivity training will be halted in federal agencies.

But let’s not leave the old Kelly story yet, just as people like John Cassidy are appealing to Kelly now to speak nobly to the latest Trump betrayal. Because back then, in 2017, Kelly was anything but noble. He unmistakably said that Wilson, who is Black, boasted that President Obama just handed her 20 million dollars. That is to say, he slandered both her and the former President.

In 2017, there was a tape: the Sun Sentinel had a video of the building dedication ceremony and it exposed as false Kelly’s version of the story: Wilson “had not taken credit for the building’s funding” nor had she claimed to have Obama on speed dial. She had only had a hand in the building’s naming, in any case, not its funding, which was approved before she was elected. And she had fully honored the new building’s namesakes at the ceremony.[iii] James Comey, who also spoke that day, had singled her out for praise, though, and thanked her for her work on the project. Perhaps that is what somehow stuck in Kelly’s mind. Or maybe it was his craw.

When Kelly said, falsely, that Wilson’s “grandstanding” remarks focused more on her own actions than the heroism of the two FBI agents, he implied there was a pattern here and that with Sgt. Johnson she was at it again, stealing someone else’s moment for her own purposes. It is always all about her, Kelly seemed to say, projecting onto Rep. Wilson qualities he had no doubt come to know intimately in Trump’s Oval Office.

In Kelly’s criticism of Congresswoman Wilson for “grandstanding,” we heard then an echo of Trump’s distinctive supper-club vocabulary, as when he called Comey a “showboat.” In 2017, the General was repeating the empty words of an empty man whose Midas touch turns everything not to gold, as he clearly wishes us to believe, but to Whiteness (where Kelly himself is clearly quite comfortable). Now, in 2020, Kelly may cast his silence as nobility. But the pattern suggests otherwise. If only we could put them all on mute.

* this piece is an abbreviated version of a chapter from Shellshocked: Feminist Criticism After Trump, Fordham University Press, 2021.

[i] Yamiche Alcindor, “Rep. Frederica Wilson on Trump: ‘That Is Not What You Say to a Grieving Widow’,” The New York Times, October 18, 2017, https://www.nytimes.com/2017/10/18/us/politics/congresswoman-wilson-trump-niger-call-widow.html.

[iii] Jeremy Diamond, “Kelly erroneously claimed congresswoman took credit for building funding, video shows,” CNN, October 20, 2017, https://www.cnn.com/2017/10/20/politics/frederica-wilson-john-kelly-video/index.html. On the video, Sophie Tatum, “Kelly says he’ll ‘never’ apologize for comments about Rep. Frederica Wilson,” CNN, October 31, 2017, https://www.cnn.com/2017/10/30/politics/john-kelly-frederica-wilson-apologize/index.html. Also, “Kelly did not dispute Wilson’s account of the call, but instead indicated he advised Trump to say the words for which he is now drawing criticism, though Trump has previously said Wilson’s account was ‘totally fabricated.’” Jeremy Diamond, “Kelly calls Rep. Wilson an empty barrel in recollection of 2015 FBI ceremony,” CNN, October 19, 2017, https://www.cnn.com/2017/10/19/politics/john-kelly-frederica-wilson-fbi/index.html. A year later, “Frederica Wilson says she never received an apology from outgoing White House chief of staff John Kelly after he falsely attacked her. Instead, she’s received death threats and nooses in the mail over the past year.” Alex Daugherty, “Frederica Wilson never got an apology from John Kelly. She got nooses from critics.” Miami Herald, December 10, 2018, https://www.miamiherald.com/news/politics-government/article222899605.html.