What Happened, a Review 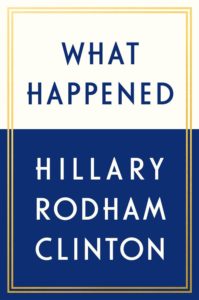 In years of teaching, I have often pointed to Hillary Rodham Clinton as a perfect example of how sexism and misogyny work in political and popular culture. Clinton has long been a target, but she first came onto my radar during Bill Clinton’s presidential campaign in 1992. I remember reporters and the general public trying to wrap their heads around a woman with a career whose husband was running for president; like it was impossible for a woman to do both. Not surprisingly, Clinton dismissed their puzzlement, telling a reporter that “I suppose I could have stayed home and baked cookies and had teas, but what I decided to do was to fulfill my profession which I entered before my husband was in public life.” Clinton’s critics used these words against her for, oh, the next 25 years.

We heard plenty in the wake of Clinton’s loss in 2016 election, though not so much from her. In particular, we heard about the emails (though clearly, there is some deep-seated hypocrisy at work here, given the popularity of private email servers in the Trump White House). But then another narrative emerged, one that concluded that Hillary Clinton would never take responsibility for her loss, that she would blame it on everyone and everything but herself. Progressives dismissed her, as they had since the campaign, claiming she was ‘compromised’ as a candidate, and they critiqued her centrism.

And so emerged the Whiny Hillary trope.

Then, last month, she released her campaign memoir, What Happened. The hatred and vitriol became even worse. Amazon was forced to remove hundreds of poor reviews posted before the book was even released. But the popular narrative of Whiny Hillary persisted. I listened to an interview on NPR where the studio host berated her for not taking responsibility for her loss. All around me, in my Twitter feed, on Facebook, and even in conversations with friends and colleagues, I couldn’t avoid the Whiny Hillary narrative.

I had to read the book. I had to read it for myself to see if Clinton would take responsibility for her errors on the campaign trail. As a disclaimer, had I been eligible to vote (I am a Canadian living in the US), I don’t know if I would have voted for her in the primaries, or for Bernie Sanders. I was torn. I definitely would have voted for her in the general election. I have never really been a big fan of Hillary Clinton, but I am also mindful of the way in which the narratives about strong women are crafted in our culture. I did not buy the ‘flawed’ candidate argument many progressives put forward. Bernie wasn’t perfect either.

What Happened is not my typical reading. I generally avoid memoirs, though I did read Bill Clinton’s memoir, My Life (at least I read 80% of it). I especially avoid politician memoirs as, like most people, I don’t really trust politicians. But, given the static around What Happened, I felt compelled.

It turns out that Hillary Clinton accepts her role in her defeat. She spends much of the book talking about her errors. When she discusses the errors made by her campaign team, she deflects blame back to herself. She acknowledges that she didn’t always trust her instincts in dealing with Donald Trump. Had she, it might have turned out differently. She also writes about how devastated she was at her defeat. Of course she was. What I found most surprising in What Happened is how Clinton comes across as a thoroughly decent person. (Of course, her haters will now accuse me of any and all crimes.)

But here is the simple fact: Clinton has been in American public life for a quarter of a century. She has held some very powerful positions. Part and parcel of that is the simple fact that she has had to make decisions the rest of us never have to face. And sometimes she has made the wrong choice – something she has publicly acknowledged – just like the rest of us. Of course, her bad decisions have much greater impact on the world. But find me a politician who has held power who has not made bad decisions. Every senator, secretary of state and president in the history of the United States is guilty of this. So spare me these complaints.

A friend of mine dismissed Clinton’s memoir as “Biden, Bernie, Obama, the press, Comey, etc… #Yawn..” And, yes, she does discuss all of this (and more). But she does not burn Joe Biden. She does gently chide Bernie for hanging around in the primary race for too long. She has nothing but respect for Obama. But then comes the press, Comey, and Trump.

Clinton does discuss sexism and misogyny. How could she not? She provides countless examples of her own experiences with these two forces as a politician and woman in the public eye. They are obvious to anyone who looks. And it is an uncomfortable truth that women have to work twice as hard as men in order to succeed. It is an uncomfortable truth that women and men are treated and judged differently. The research on both of these points is irrefutable. And, of course, Clinton came up against sexism and misogyny constantly during her campaign. (In Tennessee last summer, I saw grown men wearing t-shirts printed with text calling her a bitch, and a whore, and jokes about rape.) And she is right to discuss this. Every woman has experienced some variation of this in their personal and professional lives. That is a truth that the rest of us (men) must acknowledge and help to fix.

Clinton does discuss James Comey. Comey took two unprecedented steps last year. The first was his press conference in July when he announced the FBI wasn’t and couldn’t charge her for her email server, because no crime had been committed. Then, in late October, Comey announced that the FBI had found some emails on Anthony Weiner’s computer (the then-estranged husband of Huma Abedin, a long-time Clinton aid), and was thus re-opening the case. This was a serious WTF? moment. A few days later, Comey quietly announced nothing was there, but the damage had been done. In fact, almost all data on the election shows that the Comey letter was the deciding factor in the election.

Clinton also discusses her opponent and the press. She notes, sardonically, that the media began to note how nothing stuck to Trump. None of his gaffes – like inviting Russia to hack her mail, or suggesting a Second Amendment fan might ‘stop’ Clinton – ever stuck. The disgusting Access Hollywood tape just bounced right off him. Clinton is right to note that it was the media that allowed this to happen. The media itself didn’t stick to these stories. (Having said that, given there was a new revelation or gaffe daily, it was hard to keep up.)

Finally, Clinton discusses the elephant in the room – Russia – and rightly so. The evidence is pretty overwhelming that Russia was up to no good during the 2016 election, and it was up to no good in favor of Trump.

Taken together, What Happened offers a wide-ranging summation of what happened to the 2016 Clinton campaign. And Clinton is right to discuss the external factors that she could not control, because they did play a role in her defeat. Absolutely. But there is also the simple fact of the razor-thin margin of her defeat. And for that, Clinton takes her lumps. She discusses her role in her defeat, what she did wrong on the campaign trail. Towards the end of the book:

“I’m sure I’ll keep replaying in my head for a long time what went wrong in this election. As I said in my concession speech, it is going to be painful for quite a while. None of the factors I’ve discussed here lessen the responsibility I feel or the aching sense that I let everyone down.”

Let us not forget that Clinton won the popular vote, and that she received the second most votes ever in a presidential campaign, trailing only Barack Obama’s 2008 victory.

In other words, Hillary Rodham Clinton remained a very popular politician throughout the campaign. She still came within a millimeter of winning the presidency, and her story is important to understand a presidential election that has left many commentators, Americans, and people worldwide utterly flummoxed.

And the wider campaign against her and this memoir, of Whiny Hillary, is just more proof what she had to go up against last year.