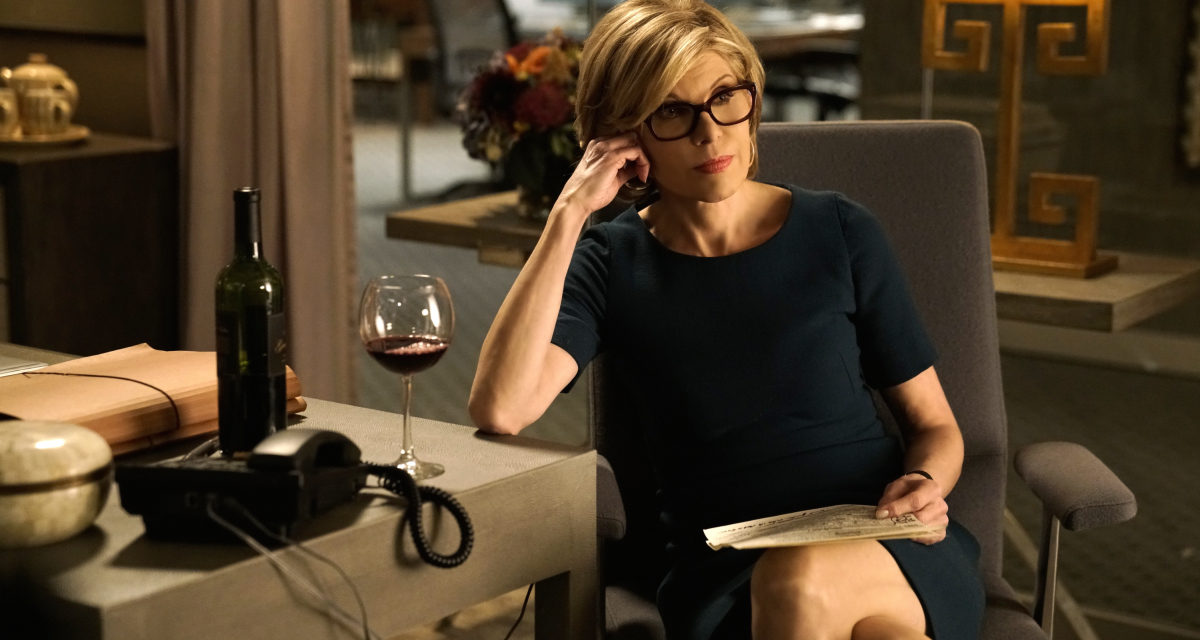 I faithfully watched The Good Wife on Sunday nights for all seven seasons. It’s a melodrama centered on a big Chicago law firm, Gardner & Lockhart, a newly crafted yet creaking vessel that tries to steer an honorable course between the Scylla of financial success and the Charybdis of moral bankruptcy.

Every lawyer there, every character I should say, knew what was at stake, and kept rolling the dice, hoping for the best and knowing “the best” is simply impossible under the legal system that regulates our modern lives, because there the protocols of argument, the procedures themselves—in theory, everybody gets due process, more facts and better thinking get produced by contention in the courtroom—these are more important than the conclusions, the verdicts, right or wrong.

As Alicia Florrick, the wife of the morally compromised state’s attorney (played by Chris Noth), Julianna Marguiles was the narrative center of this dramatic proposition, which acknowledges the frailty, even the absurdity, of justice as the law can deliver it, in the courtroom (the lawyers) or on the street (the cops). Every episode, she faced a problem as a lawyer that was translated and sublimated as a personal choice. That’s what kept me watching. As in the classical Hollywood cinema, the political becomes personal—the sinews of law and order begin to look like moments in somebody’s biography, because now they appear as real events in “real lives.”

Like most Americans, I’m fascinated by the limits and possibilities of the law, because that’s what we, us Americans, pledge our allegiance to. The Declaration of Independence makes a difference, as Melville put it—because all men are created equal, nobody’s above the law.  Our belief in the sovereignty of the people “out of doors,” not the appointed or elected agents of the state, enforces this proposition. Or at least that’s we tell ourselves.

That unstated, typically inadmissable knowledge is the premise of the sequel to The Good Wife. It’s called The Good Fight and it’s an unflinching piece of agitprop against Trump and his racist, alt-right, fascist minions. OK, not quite agitprop, but pretty close, and entertaining as hell precisely because it foregrounds and addresses the psychological lacerations we suffer because we know a lying, thieving, thuggish buffoon—the stupid, cynical, cunning man who would be king—occupies the White House. In the last episode I watched, from Season 2, the “golden shower” tape is the artifact that animates the action.

The cast of The Good Wife is back, absent of course Marguiles, and again the narrative center is a woman, Diane Lockhart (Christine Baranski), the fierce litigator, named partner, and erstwhile friend of Alicia Florrick. She’s been forced out of her own firm because one of her big clients was a Bernie Madoff type, Henry Rindell, who has robbed hundreds of investors—including Diane herself—of their life savings.  What can she do except sell her apartment and find another job?

But now Chicago itself becomes a character. Diane gets hired by Adrian Boseman (the inimitable Delroy Lindo), the principal of a predominantly African-American firm, Reddick, Boseman, which generates a third of its revenues from lawsuits against and settlements with the CPD. Hereby the 2014 murder of Laquan McDonald by a homicidal cop (just convicted of manslaughter) becomes the back story of the series, which in turn makes Ferguson, Black Lives Matter, Spike Lee (Chiraq), the Chicago Teachers Union, and Cornel West its immediate antecedents. Torn from the headlines? No, this show seems to unfold in real time, or ahead of time.

(The city of Chicago has already paid $50 million this year to settle lawsuits—wrongful arrest, unwarranted deployment of lethal force, unjustified incarceration, etc.—against the CPD. Last year the city of New York paid $1 billion to settle such suits against the NYPD.)

The impending demographic inversion of the ratio between the white majority and minority populations in the US is here portrayed as an intriguing personal problem within Reddick, Boseman, where Diane, her assistant, and her goddaughter—an associate on the partner track—are three white females fighting the good fight against racism but quite possibly displacing black males in the process. Marisa, the feisty assistant who was hired over from Diane’s former firm, Lockhart, Gardner, competes with Jay, Reddick, Boseman’s ace African-American investigator, for assignments and attention. Meanwhile the goddaughter, WASPish Maia Rindell, almost disgraced daughter of her father’s Ponzi scheme (see above), bonds with Marisa, but also bonds with Lucca Quinn, an African-American litigator, another refugee from Diane’s former firm, who turns out to be pregnant by a DOJ prosecutor, who is . . . a white guy.

It gets incestuously Oedipal if not merely Shakespearean. Moms and Dads and mentors are everywhere, but nobody knows what role they are to play, loyalist or renegade, agent, mole, or spy. Maia sells her father out, as he had previously sold her out to avoid jail time. Everything is broken—or fungible. And, as in The Good Wife, marital transgression, plain old adultery, is the trigger of all the drama, Diane to Maia and Lucca, whether offered as sworn testimony in court (public) or as authentic accusation and admission in person (private). All the while, Adrian’s hires look like Affirmative Action for white folks. Lucca’s guy, to whom she will not pledge her troth, is smart, nimble, and funny, but no match for the company he keeps.

On the cusp of a non-white majority or future, put it as you please, The Good Fight knows where we are, and says so, perhaps too pointedly, too sanctimoniously, as a way of cauterizing those psychological lacerations Trump carves into us every day. (Diane becomes a micro-dosing addict as a result of watching too much news on TV.) The criminal justice system in this country has always been a way of disciplining the unholy deviants, the angry mongrels, the ugly mariners, the unruly renegades, and the bewildered castaways, the ones who have always plotted a course toward a different horizon. Now, with Brett Kavanugh’s confirmation—I can barely type those words—that system is poised to punish the rest of us.

The Good Fight does no healing. The wounds stay open. But so does the future.