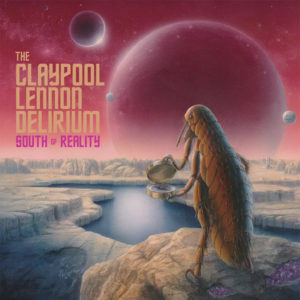 Les Claypool is the visionary bassist and leader of the oddball rock band, Primus. Sean Lennon, aside from being the son of royalty (John Lennon and Yoko Ono, if you didn’t know), is an oddball himself, with a long musical career, dating back to the 90s in Cibo Matto and as a solo artist. They met during a 2015 tour consisting of Primus, Lennon’s The Ghost of a Saber Tooth Tiger, and Dinosaur, Jr. Claypool and Lennon stayed in touch and, presto blammo, The Claypool Lennon Delirium, a delicious compound of psychedelia, released their first album, Monolith of Phobos in 2016, following that with an ep, Lime and Limpid Green in 2017.

South of Reality, though, is where things really start to come together for Claypool and Lennon. On the first album and ep, it seems that they were mostly noodling around in a studio, the songs lacking structure and being somewhat haphazard. But, here, they explode out of the speakers into a retro 60s psych stomp. It certainly helps that Lennon sounds so much like his dad it’s kind of scary, so you always have this Beatlesque feeling, but the music is weirder and more psychedelic than the Beatles ever could be.

On South of Reality, two musicians known for their oddball and avant-garde leanings (Lennon is, after all, also Ono’s son), seem to lock into groove with each other. Claypool’s voice has also matured nicely and floats over the music here on the songs he sings.

The standout track here is the 2nd one, ‘Blood and Rockets,’ which is actually a two-movement affair, ‘I: Saga of Jack Parsons’ and ‘II: Too the Moon.’ The song tells the real life story of a rocket engineer, Jack Parsons, who joined up with the British occultist, Aleister Crowley. This got weird quick, like when Crowley, who had created his own religion, Thelema, began having delusions that Hitler would be their saviour or something like that. As for Parsons, he became obsessed with Thelema. ‘Blood and Rockets’ is a softly gorgeous track, sweeping and beautiful.

Lyrically, this might not be the greatest album ever, but given the music and general feel of the album, I’m not sure I care. Claypool and Lennon have hit a groove here.