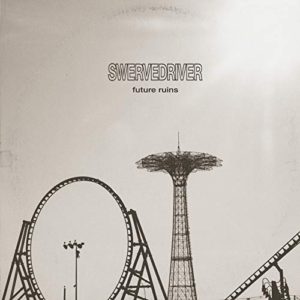 Swervedriver came of age in the great early 90s era of British shoegaze music.  Originally hailing from Oxford, from whence the greatest of the shoegazers, Ride, came, Swervedriver relocated to London early on.  In all honesty, though, they were never really a shoegazer band, rather, they were a rock’n’roll band that had some shoegaze elements, particularly in tracks like ‘Rave Down’ from their 1991 début, Raise, and ‘Duress’ from 1993’s Mezcal Head.  The latter introduced a much harder edge to their music, more grinding and chugging guitars and bass.  And the rest of their 90s output saw the band gently move towards a more basic rock’n’roll sound before they split following 1998’s 99th Dream.  They were burned out from the record/tour/record process, to say nothing of the heavy drug culture that developed around their studio, Bad Earth, in Farringdon, London.

Frontman Adam Franklin bounced around here and there, did some solo work, another band called Toshack Highway, and a few other things.  He and the other remaining founding member, guitarist Jimmy Hartridge and bassist Steve George and drummer Jez Hindmarsh (both of whom joined for Mezcal Head) decided to reform in 2008 with a well-received performance at Coachella.  This led to more touring, which led to more touring, which led to being on Fallon, which lead to the first reunion album, 2014’s most excellent I Wasn’t Born to Lose You.  Hindmarsh moved on at the end of 2010 and was replaced by Mikey Jones.

Swervedriver have a classic sound centred around the duelling, chugging, shimmering, cascading guitars of Franklin and Hartridge, and George’s chugging bass.  And Future Ruins continues in this vein, but also introduces a bit of a softer sound, most notably on the title track.  It’s not a ballad, but it’s slower, it’s softer.  Earlier softer music from the band tended to sound like coming down, especially on Raise.  But here, it’s a welcome respite from the pounding guitars and bass of the two opening tracks, ‘Mary Winter’ and ‘The Lonely Crowd Fades into the Air.’  Not that I’m complaining about the pounding, mind you.  And, of course, since it’s Swervedriver, we get a pretty righteous bit of guitar to finish off the track.  Similarly, ‘Everybody’s Going Somewhere & No One’s Going Anywhere’ brings us gentle sounds and the vocals sound as if Franklin is calling long distance.  There’s even something that sounds like a xylophone to start off the track.  My favourite track is ‘Spiked Flower,’ which manages to be both a classic Swervedriver song with Franklin’s laconic vocals and something entirely new with its pounding drums.

There is always a danger in a much-beloved band reforming and deciding to carry on with their legacy.  The Pixies, for example, do not make music that is the equal of their glorious original run in the late 80s/early 90s.  Jane’s Addiction’s reformation albums did not go over well.  But a lot of these old shoegazers have bucked that trend.  My Bloody Valentine returned in 2012 with mbv, and while it wasn’t Loveless, it was pretty damned good.  I Wasn’t Born to Lose You announced Swervedriver were back in business.  And a couple of years ago, Ride themselves reformed and brought us an excellent reunion album.