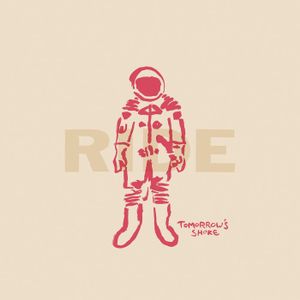 Away back in the early 90s, Ride burst onto the scene on the back of three celebrated eps, two of which were collected on the long-player, Smile, the third of which was tacked onto the end of the band’s proper début, Nowhere.  They were at the vanguard of the so-called shoegazer scene of the era, but like My Bloody Valentine, were louder and heavier.  Their live show was an avalanche of guitars and the dreamy vocals of co-frontmen Andy Bell and Mark Gardener.  I wore out three cassette versions of Nowhere between 1991 and when I bought it on CD in 1994.

I still remember Rolling Stone calling them the most ‘adventuresome’ of the new crop of British bands at the end of 1991.  And it’s funny, pop culture seems to remember the early 90s as this era of loud, grungy music, led by Pearl Jam and Nirvana.  But that was only part of the story.  It was also the golden age of hip hop.  And there was the drug-induced rave music of the likes of Primal Scream.  And shoe-gaze. In 1992, Ride unleashed Leave Them All Behind, which ran to the top of the British charts, and ended with the beautifully elegaic ‘OX4,’ the postal code of their home town.

Their third album came in 1994, Carnival Of Light, and by then they had turned down the amps and revamped the sound with the arrival of Britpop.  It was a great album, but the band was deeply troubled, as Bell and Gardener’s egos were out of control.  Bell, in particular, was a real prat.  They were the two main songwriters, and Bell refused to allow his songs to be interspersed with Gardener’s on the album.  So, the first half is Gardener’s, the second, Bell’s (though they still shared vocals throughout the album).  Meanwhile, Gardener had begun a self-exile from the band, legends tell of him showing up to recording wrapped in furs, with his girlfriend and in breaks from recording, they would disappear.  Not surprisingly, they broke up (I won’t mention the ‘final’ album, Tarantula, which is an unmitigated collection of shit songs, other than the opener, ‘Black Nite Crash.’)

Bell went on to join Oasis as the bassist. I’ve never understood how he could go from the brilliance of Ride to the mediocre, warmed-over Beatles pap of the Brothers Gallagher, but there you go.  Gardener forged a career as a solo artist.  But, relations thawed.  Eventually, Bell and Ride drummer Loz Colbert joined Gardener on stage, and then Gardener and Bell did some solo acoustic shows together around the turn of the millennium.  This led to some reunion shows, but it wasn’t until 2014 that the band reformed for good.

That led to last year’s excellent comeback album, Weather Diaries. And this brings us to Tomorrow’s Shores.  The four songs on this ep were originally leftovers from the Weather Diaries sessions, but the band went back into the studios with producer Erol Aikan, a legendary London DJ.  And so we get these four little gems.  Whereas Weather Diaries somewhat distanced Ride from their signature sound, as it seems the band wanted to modernize, to show it wasn’t stuck in 1993, Tomorrow’s Shores returns us to that sound.

A wall of fuzzed out guitars and bass meet us on opening track, ‘Pulsar.’  Underneath this, Colbert’s drums crash and bang, and a keyboard bit pulses throughout, at one point recalling the organ intro to ‘Leave Them All Behind,’ the title track of the album of the same name.  And as Bell imagines time and space travel, the outro guitar solo brings us back to ‘OX4,’ with its sad, elegaic noise.  ‘Pulsar’ is easily one of Ride’s greatest songs.  The other three tracks follow the same plan, dreamy vocals mixed down underneath pulsing keyboards, fuzzy and screaming guitars.

So why have Ride returned to their signature early 90s sound?  I guess they have realized that they have progeny in pop music, as everyone from MGMT to Car Seat Headrest and beyond have aped their sound.  And now, their sound is hip again. This ep, my friends, is the shit.