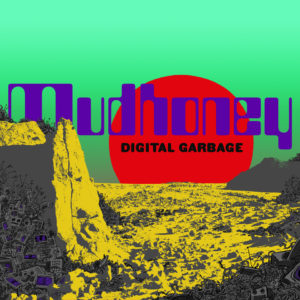 Earlier this year, Mudhoney celebrated their 30th anniversary, commemorated with the live album, LIE (Live in Europe).  It’s kind of mind-boggling to think they’ve been doing this that long.  And even more impressive is that even now, 30 years on, as the band members are pushing 60, they sound as essential, and pissed off, as they ever have.  There was a long wait between their 2008 album, The Lucky Ones, and their 2013 comeback, Vanishing Point.  Something interesting happened in that break.  They re-discovered their snarl.  But 2008, I found Mudhoney to be getting tired, frontman Mark Arm even sounded bored at times.  But no more.

Arm is a fascinating frontman, of the Iggy Pop school of frontmen (minus the self-harm and utter looniness of Sir Iggy), but oozing charisma and self-loathing, able to spin on a snear on stage, and a pretty vicious rhythm guitarist (Steve Turner plays most of the leads).  And on Digital Garbage, he sounds pissed off and vicious.  His target is the white supremacist, Christian right (or what some call the alt.right), and the idiocy of our lives filtered through social media.  The first track, ‘Nerve Attack,’ openly mocks white supremacists, survivalists, and gun nuts.  ‘Kill Yourself Live’ talks about the pressures and stupidity of social media.  And, ‘Hey, Neanderfuck,’ well, I suppose you can figure out what’s going on there.

And then there’s the music.  After 30 years in the business, Mudhoney have their own distinct sound, filtered through Superfuzz and Bigmuff, Arm and Turners’ favourite effects pedals.  But, on Digital Garbage, they even have new sounds, getting back in touch with their punk roots on a few tracks.

I’m always happy to get a new Mudhoney album.  But I like it even more when I find myself listening to it endlessly.