Idles — Joy as an Act of Resistance 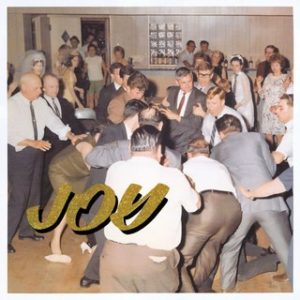 Joy As An Act of Resistance
Partisan

For my money, the best band in the world right now is Idles.  A collection of working-class louts from Bristol in the UK, they make essential, vicious post-punk noise.  Their 2017 début, the appropriately named Brutalism, was a kick in the head.  Over 13 vicious tracks, frontman Joe Talbot deconstructed classism, nationalism, wilful ignorance and toxic masculinity.  Talbot’s co-opting of Margaret Atwood in the midst of the track ‘Mother’ was both surprising and welcome:

Sexual violence doesn’t start and end with rape
It starts in our books and behind our school gates
Men are scared women will laugh in their face
Whereas women are scared it’s their lives men will take.

Live, they are devastating:

Joy picks up where Brutalism left off.  It’s not quite as heavy and vicious as its predecessor, but it is equally essential listening. Tablot remains fixated on what ails the world, including xenophobia and nationalism, racism, and, as ever, toxic masculinity.  One thing I appreciate about Idles is that they speak to violent masculinity in our culture through a particularly vicious art form, and yet, they are not the violent ones.  And despite the heavy lyrical content, Idles are not preachy.  Part of this is due to the music.  The duelling guitars of Mark Bowen and Lee Kiernan provide the brutalism of the music, over the bouncing bass and drums of Adam Devonshire and Jon Beavis.  The result is wonderfully devastating.

The track ‘Danny Nedelko’ takes on immigration.  Talbot sings that his blood brother is an immigrant, but it’s the chorus:

And interestingly, listening to this track, as an immigrant, even a white immigrant, it resonates.  I am currently reading a book about the 1985-86 English First Division football (soccer) season.  That year, the two Liverpool clubs, Everton and Liverpool, battled for supremacy.  Everton were the defending champions, but Liverpool pipped them for both the league and FA Cup.  But this season carried on in the wake of the City Liverpool’s battle with Thatcherism.  The Liverpool city council was Labour and, unlike the rest of England, Scotland and Wales  was in open war with Thatcher.  And this was a war the Iron Lady won. The mid-80s in Britain as a whole were rough, especially for the working classes, as Thatcher and others worked against the interests of the workers, shuttering entire industries within the larger frameworks of deindustrialization.  It produced some of the best music to ever come from that island, in the form of Billy Bragg, the Smiths, the Specials, and even the likes of Elvis Costello were vitriolic when it came to Thatcher.  The UK is experiencing something akin to Thatcherism between the austerity of successive Conservative governments of David Cameron and Theresa May, to say nothing of the clusterfuck of Brexit.  Idles are the soundtrack to the dispossessed and angry of May’s UK.  And they translate across the Atlantic to North America.  rs of the 80s.

Talbot himself has an interesting backstory.  When he was still a teenager, his mother suffered a stroke that left her paralyzed.  He became her caregiver; she died just before Brutalism came out.  He has also had his battles with the drink.  And he has seen more than his share of heartbreak.  It is impossible not to listen to the track ‘June’ and not want to cry.  Talbot and his partner suffered the still-born birth of their daughter, just as Idles were gearing up to write this album.  The first two verses:

Ouch.  Joy As An Act of Resistance is both a reminder and a slogan for dark days, it is also Idles’ response to pain and heartbreak.  I heard an interview with a country singer on NPR last weekend about how now that she’s happy, people expect her to have nothing to say.  She wants to prove that wrong, rejecting the idea that only pain can lead to great art.  As much as I love Idles and this new album, I only hope Talbot gets to test that theory for Album Number Three.