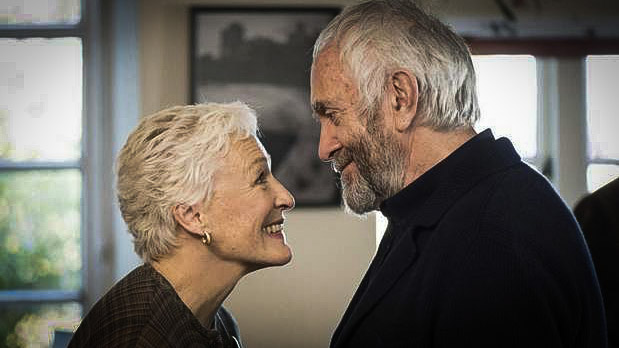 Björn Runge’s The Wife, based on the 2003 novel by Meg Wolitzer, is one of this year’s many thoughtful cinevisual works that explicitly represent the oppression of women at the hands of powerful men. (So if you are a woman, and haven’t dealt with this enough in your personal and professional lives, you can now go experience it as entertainment as many more times as you want.) But it’s actually fortuitous that The Wife is thematically matched this season by so many works. My own aggregate of quotidian, life-in-2018-related despairs notwithstanding—after having watched many of these movies recently, I feel so especially tired of witnessing women used, manipulated, and then rewarded for it by men. It feels draining to experience even secondhand. But it is this precise sensation—sad fatigue at the prospect of more female sacrifice, more social submission, and more exploited labor—which is the very soul of The Wife, and it handles this guiding theme wisely.

The wife of the title is Joan (Glenn Close). It’s 1992, and her novelist husband Joseph Castleman (Jonathan Pryce) is being honored with the Nobel Prize for Literature. The film, an acting masterclass by both Close and Pryce, begins just before Joe will receive the congratulatory phone call from the Swedish Academy. When the phone does ring, Joe begs the caller to hold on, so Joan can get on the extension. With his request that she be allowed to listen in, their relationship is offered to this caller, and the audience, as a partnership—a collaboration between an accomplished man and the woman he always wants to include, to thank, and to recognize as having had to deal with a lot on his behalf. This moment, and the many scenes like it (Joe’s a real toastmaster), swell with the movie’s big joke: the straight-faced suggestion that it will develop the notion that all great men have long-suffering women propping them up—neglected women who will reach breaking points and want their support and sacrifices to be meaningfully recognized.

The film runs this gag for as long as it can, but eventually suggests that it is guided by a new theme: when Joan’s excitement becomes muted, perhaps this is not because the celebratory Joe is glossing her deep support and sacrifices by saying constantly that she made him the man he is today, but that in these speeches, he has neglected to mention her large editorial role. Flashbacks to their meet-cute at Smith College, forty years prior, with Joe as a charismatic young English professor (Harry Lloyd) and Joan (Annie Starke, Close’s real-life daughter) as a gifted, smitten student in his fiction class, inform us that Joan possesses the writing chops to meaningfully and dependably weigh in on Joe’s body of work.

Except for these flashbacks, the film mostly stays in Stockholm, following Joe’s award schedule, where Joe flirts incessantly with an attractive young photographer (Karin Franz Körlof). (The story takes place at the start of the Clinton era, as some critics have mentioned, but its setting specifically in 1992 might also reference the womanizing antics of that year’s real-life literature Laureate, the poet Derek Walcott.) Joe also spends this trip quarreling with his Large Adult Son David (Max Irons), who wants to be a writer and for his father to call him talented.

The confined, bottled spatiality of each scene makes The Wife seem like it was adapted from a play rather than a novel; save for a few outdoor establishing shots, the film is mostly composed of conversations and speeches in rooms, cafes, planes, and cars. The theatricalized interior spaces suggest that Joe is putting on some sort of a show for the world, as well as that his home life is a farce. A flashback to Joe’s first attempt at novel-writing shows him crying like a grotesque baby in Joan’s arms about how hard life is. The film lets the oft-spotlighted Joe’s many faults (his extramarital dalliances, his insensitivity to his family, and his possible dismissal of Joan’s help) slowly unfold into a paltry recital; that he spends so much time thanking his wife onstage only makes him seem more pathetic—to us, and possibly to her.

I say “possibly” because, unlike her husband, Joan is not fully readable, though both her pain and love are palpable. She is subtle, stoic, and more at home (and more accessible) in the film’s many close-up shots than the proscenia sought by her speechifying spouse. She warmly fills up the screen, while the large interiors Joe seeks help him to echo emptily. Close and Starke (as a team) excel at keeping both versions of Joan calm and measured. She is a sincere, pensive, closed book, as simultaneously frosty and luminous as, well, winter in Sweden. Not an ill word escapes her lips, and no one can trick one out of her, not even the scheming, suck-up wannabe-biographer Nathaniel Bone (a wonderfully slithery Christian Slater). “If you’re trolling for nuggets of bitterness,” she tells him (still kindly), when he flatteringly pumps her for them, “you’ll find none here.” [SPOILER.] And she holds to her gentle, classy abstruseness even when he insinuates that it’s not Joe, but she, Joan, who has truly authored Joe’s books.

Nathaniel calls Joan mysterious for obscuring the part she is playing in Joe’s life; and here the film named after her reveals itself to be doing the same. It won’t unveil the precise dynamics between Joe and Joan until Joan is ready; it has all along been teasing the audience with simpler takeaways. Even though the control over Joe’s body of work turns out to be split between figurehead and creator (endowing them each with incomplete powers), that the composed and mature Joan is in control of the film’s narrative reveals that she has prevented the men around her from fully turning her life into a maternal melodrama. She needs this, since they demand generation and motherhood from her on countless other fronts.

The film asks about the various patriarchal pressures and institutions that have enabled this dynamic, allowing The Wife to do some constructive ideological work by revealing a woman stuck deep inside a marriage that will scrub her away, and living in a zeitgeist that does not want her to contribute. The name “Joan Castleman” does not sound too different from her husband’s; later, at the Nobel ceremony, what began as a collaboration between them seems to be manifesting itself as a taunt. After all, her name expands on his, yet she is being absorbed into his legacy.

But the film’s far more important (and feminist) work is not shaming, scolding, or scorning Joan for her choices, when they are fully revealed, even though they seem counterintuitive and have ostensibly landed her inside this patriarchal grindhouse. Both the film and Joan understand and accept that she has spent a life permitting the concealment and domestication of her labor; the film does not offer a corrective or castigation of her behavior by forcing her into ignominy, or asking her to break free, or demand she perform some other recuperative act of ideal feminism.

Joe, on the other hand, is welcome to stop their strange machine at any time— or even just to reciprocally support Joan. He, however, needs attention and the adoration. Perhaps unable to extemporize profundities, he quotes a lot to his audiences from James Joyce. Attempting to impress the young photographer who allows his flirtations, he quotes to her the sad, snowy end passage of “The Dead.” Joan sees them, calmly and knowingly from the top of the stairs. Standing there, she embodies another character from elsewhere in Dubliners, Eveline, a woman who has reasons to leave but stays, and whom Joyce fully introduces simply by explaining “she was tired.”