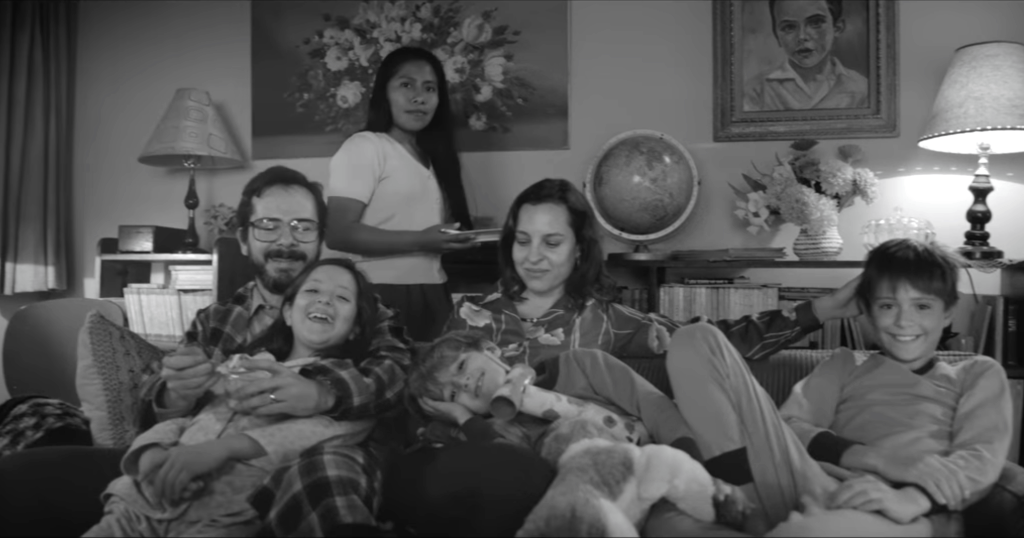 Alfonso Cuarón’s Roma, which is available to stream on Netflix, is a striking, painstaking panorama of life during one year or so in a wealthy Mexico City household, from 1970 to 1971. I say “panorama” to describe a film whose narrative structure emphasizes length, because the film itself is about space rather than time. It is about community, confinement, freedom, proximity, distance, class, districts, family, strangers, staircases, oceans, sky, travel, home, movement, stillness, change, stasis, walls, plains, city and country. It is about where we are from and why we have left. It is about how far we go and why we stay.

The film’s protagonist, and the person who embodies and refracts these themes, is Cleo (Yalitza Aparicio, stunning in her first role), a young woman who works as a maid for a wealthy family in their spacious, walled, urban home in a neighborhood known as La Roma. She shares a room in the top floor of a detached structure adjacent to the house (but within the walls) with another maid, her friend, Adela (Nancy García García), and she’s almost part of the family—simultaneously adored by and tending to the three adults, four children, and a dog. Sometimes the children tell her how much they love her while she dresses them; other times, she is commanded to scrape up canine feces from the enclosed driveway. She is certainly not mistreated or insulted. But she is made to rise and go get the patriarch a drink when, at the tugging insistence of the littlest child, Pepe (Marco Graf), she joins the group to watch TV for the evening. It is not clear from her placid, always-kind face, if this is the letdown it seems to be. The film is instantly insightful about class, in these ways; asking questions about the nuances of belittlement that are inextricably linked with servitude, as well as the personal love that grows from professionally caring for other people.

The family will encounter various changes during the year. The patriarch, Dr. Antonio (Fernando Grediaga), who is supposedly going on a long business trip, is, in reality, leaving them. Cleo too will also face big changes—namely, that her martial-arts-obsessed boyfriend, Fermín, will get her pregnant and then run out on her. Because of these details, Cleo’s experience seems set up slightly to mirror that of the family matriarch, Señora Sofia (Marina de Tavira), a biochemist who must become the family’s breadwinner. But the similarity is left just as that—the film does not let the experiences of someone else (especially a wealthy, upper-class woman) attach to Cleo’s enough to recut Roma as specifically the story of two women from different socioeconomic backgrounds. That Señora Sofia seems to go through the same things as Cleo, seems to highlight that women everywhere are connected by experiences of male impropriety, and while their shared experiences might make them understand each other more, it also might not.

The movie is thoroughly wedded to Cleo’s perspective, so it basically follows her wherever she goes, even when she takes a day off, for example, to get lunch with Adela and meet up with their boyfriends. Keeping the focus of the story on Cleo turns the volume down on all of the other, more traditional narrative conventions that are befalling the family or happen elsewhere; the film seems to suggest that many people co-existing with Cleo are living in their own separate movies. (Indeed, when Fermín leaves Cleo, he leaves her story—abandoning her in a movie theater, while the picture is playing. The camera stays with Cleo and her Three Stooges movie, as Fermín simply exits the frame.) This both feels extremely realistic and highly symbolic. Indeed, Roma is a film which both ignores cinematic conventions and thereby embraces a cinematic precedent for ignoring such conventions. The title refers to the neighborhood where the bulk of the film’s events take place, but the title also acknowledges the film’s stylistic antecedents: movies made in the Italian neorealism movement pioneered by directors like Vittorio De Sica, who cast first-time actors, and filmed on-location in cities using heavy black-and-white film. Italian neorealism sought to erase the contrivances and affects of cinema and absorb the viewer in a narrative that not only seemed real, but might as well have been so. It’s hard to watch Roma, which feels so naturalistic and yet so careful, and not think of De Sica’s masterpiece The Bicycle Thieves, which is notably set in Rome.

In Roma, we overhear and momentarily see bits of the drama of other concurrent stories while watching Cleo softly move into the spaces where they are unfolding, such as Señora Sofia breaking it to her mother, Señora Theresa (Verónica García) that Dr. Antonio has a mistress and is never coming back, but we also follow her back out of them; Cleo’s plot intersects with, but does not necessarily encompass details she witnesses, like the family’s dynamic changing after Dr. Antonio leaves them. Or like the earthquake in a hospital Cleo is visiting which causes debris to rain down on incubators holding babies. Or like a forest fire which breaks out during a party at a country estate on New Year’s Eve—a party where Cleo is present, but not invited to partake in the festivities. She watches these scenes, but never participates in their action—actually standing still and calm while they occur. The main thing propelling the movie is the question: is there a disaster that can make Cleo abandon her peaceful stillness and insert herself into another narrative? What will it take for her to move? On a less-literal level, what will it take for her to become a supporting (or co-equal) character in someone else’s film—to meaningfully and disruptively make her tale intersect with someone else’s?

Roma is filmed in stunning black-and-white, with a rich palate of sunny (not shadowy) grays. I found the entire film to be breathtaking—it is a gorgeous, patient film which softly unfurls a complex tapestry of themes, offering them not to constitute prescribed readings, but as gentle, connecting suggestions. There are no contrivances here; we are invited into Cleo’s world, for a short time, dropping in on this long moment in her life. Eventually, much like Cleo herself, we will quietly and respectfully leave.