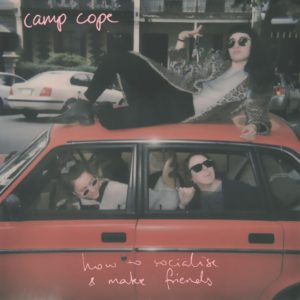 How to Socialize & Make Friends
Run For Cover Records

In an interview in The Guardian the other week, Kim Deal said that ‘misogyny is the actual backbone of the music industry, and without misogyny the music industry would crumble.’  No kidding.  Back in 2016, Camp Cope dropped their wickedly amazing début album on the world.  It got a lot of love and adulation, and deservedly so.  But, some couldn’t leave well enough alone, and pointed out that frontwoman Georgia Maq is the daughter of the late Hugh McDonald, who was Aussie rock’n’roll royalty.  And therefore, Camp Cope were riding on his coattails.  Pretty typical sexist bullshit.

On the opening track of How to Socialize, Maq addresses this head on:

You worked so hard, but we were ‘just lucky’
To ride those coattails into infinity
And all my success has nothing to do with me
Yeah, tell me again how there just aren’t that many girls
In the music scene.

The track had started off as an ostensible breakup song, but she goes on:

This is a theme in the #MeToo era of music.  Nearly every woman-fronted band or woman solo artist I’ve heard in the past year or two, from Norway’s Sløtface to Australia’s Jenn Cloher to the UK’s Tracey Thorn to Camp Cope and back, across generations and oceans, this is the message: Enough! Enough of mansplaining, rapey jokes, misogyny, and general douchebaggery.  That this is the moment we’re hearing it is both exciting and depressing.  As the sign I kept seeing at the Women’s March last year in Nashville said, ‘I Can’t Believe I’m Still Protesting this Shit.’  But, we as a culture need to hear it.  And Maq’s voice is loud and clear.

Camp Cope don’t just sing it, they practice it, too, having been heavily involved in the #ItTakesOneCampaign back home in Australia, attacking sexual assault and harassment at gigs.  Back in my day, bands like L7, Bikini Kill, and Australia’s Midnight Oil made a real attempt to stamp this out, but, alas, I refer you back to the sign at the Women’s March last year.

Anyway, back to the music.  Camp Cope make delicious, raucous, ragged 90s-twinged rock’n’roll.  I could get lost in the riffs and the sloppy guitars.  Maq’s voice is the starring attraction, though.  Her accent is heavy and heard through her vocals, and that’s part of the beauty.  She tells stories through her lyrics, though they tend to be personalized ones, drawing on her life. Her voice is loud and clear at its normal timbre, but when she really opens her mouth, it gets loud, but it’s carried along by the music.

How to Socialize & Make Friends also continues on the first album’s issues with alienation and dislocation from the social world around us.  And Maq writes songs that are easy to connect to, she hits on the themes of all of our lives without sounding trite or jaded, narratives of our daily and quotidian experiences.  Even her heartbreak sounds both like it is hers, but also as it could be mine, too.

The album centres around these themes, breaking up and sexism.  The exception is the closing track, ‘I’ve Got You,’ which is just Maq and her acoustic guitar. It’s a song to her dad, who died of cancer, and it is hard to listen with a dry eye.  The final two verses are particularly hard:

It seems a fitting end to a brilliant album.

And, like the equally brilliant début, it sounds like it could’ve been released in 1993.  So it’s quite possible I love Camp Cope because they make me feel young again, an optimistic 20-something, rather than an embittered middle-aged man.  But I don’t think so.  I found myself listening to their début album almost on repeat when it came out.

I have been eagerly awaiting the new Camp Cope album, if for the only reason being that I have listened to the début so much I’m ready for something new.  I have not been disappointed.