It is a cliché to point out how hard teachers work.  The thing is, though, this isn’t a cliché.  And teachers are getting screwed.  When I lived in Alabama, my friends and former students who taught spent their meagre wages buying supplies for their classroom, and by that, I mean chalk and erasers.  Even in liberal Massachusetts, my friends and former students who are teachers are left to do the same.  One actually bought his class a set of textbooks, out of his own pocket, because the ones he had were falling apart and there was no money to replace them.  Add to that the continued pressures from administration, to say nothing of the chances of being shot to death at work. 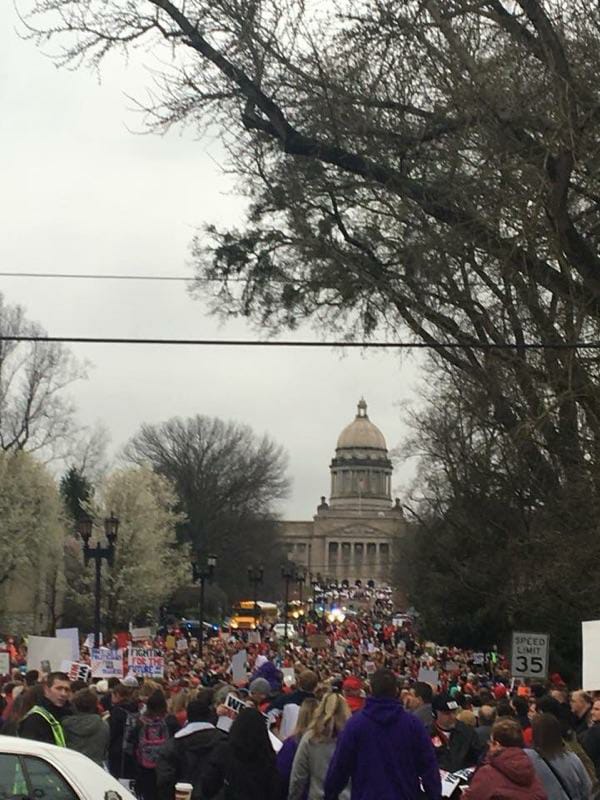 So it should be no surprise that teachers across the country are fed up and are engaged in labor action.  West Virginia, a generally very conservative state, fueled the movement, when teachers there went on a strike.  It was the first state-wide strike in West Virginia since 1990.  And, to be clear, strikes are increasingly hard to pull off, due to declining union membership, the vilification of unions, as well as ‘right to work’ (which is anything but) legislation, especially in conservative states.  So, for West Virginia to lead the nation in this is truly seismic.  And they won.  They got a 5% raise, among other concessions from the state.

This past weekend saw action from teachers in two more states, both of which are Republican-controlled.  In Oklahoma City, the capital, tens of thousands of teachers and their supporters descended on the state capital on Monday.  There, teachers have rejected last-minute concessions from the legislature, noting that they do not solve the problem. There the issue is largely related to pay, in that Oklahoma teachers are amongst the worst paid in the Union.  Teachers in New Jersey and Pennsylvania, amongst others, are also considering action.

Meanwhile, in Kentucky, teachers are downright furious.  Yesterday, they descended on Frankfurt, the state capital, to demand action.  On Friday, schools were closed in more than 20 counties over an underhanded move by the state legislature to mess with teachers’ pensions, as teachers protested.  Kentucky has a massive problem with state pensions, so not surprisingly, the governing Republicans are targeting teachers.  State Senate Bill 1 was meant to cut pensions and benefits, but, apparently concerned about its passage and the firestorm that awaited it, Kentucky Republicans folded it into another piece of legislation, State Senate Bill 151, entitled: ‘An Act Relating to the Local Provision of Wastewater Services.’  It’s also worth noting that this 300-page bill wasn’t even read by legislators (they had no time) and no hearings were held on the parts to deal with teacher provisions. 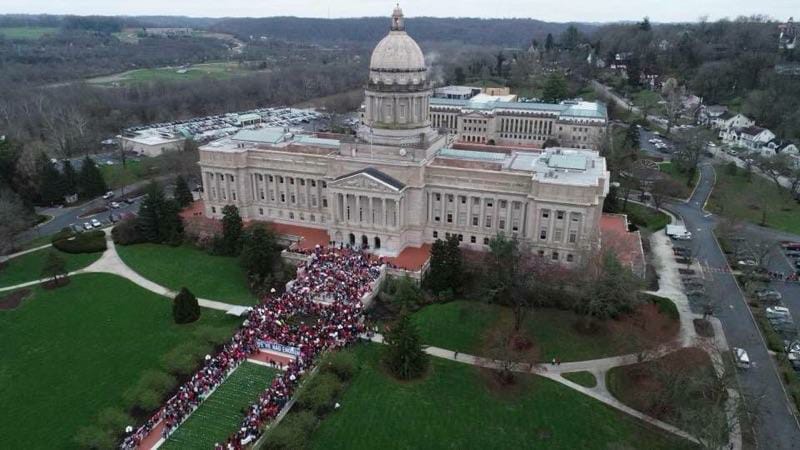 This is not what democracy is supposed to look like. I have never fully understood why legislators are allowed to tack on riders to bills that have nothing to do with with the actual provisions of the bill (and, yes, I have taught US History and/or the Constitution for years).  And then, there’s the not reading the legislation. So, frankly, legislators have no clue what they’re voting to pass, they just do what they’re told on party lines.

The legislature was packed with teachers on Thursday night as this passed.  They were not amused.  The bill now heads to Governor Matt Bevin for his signature.  He supports the move.  In fact, Bevin has gone to far as to accuse teachers of having a ‘thug mentality’ and accused them of not understanding their pension system.  Kentucky teachers do not pay into Social Security, so their state pensions are all they have.  Their cost of living adjustment has also been frozen at 1.5%, which Bevin seems to think is a raise.

Meanwhile, Kentucky Attorney-General Andy Beshear, a Democrat, intends to file a lawsuit if (or, rather, when) Bevin signs the bill:

Last night the House and Senate violated the inviolable contract and broke their word – but I am going to keep mine. I will file suit to stop SB 151. pic.twitter.com/DDHLHJArSj

To be clear, what Senate Bill 151 does is take away Kentucky teachers’ pensions, to replace it with a hybrid cash balance plan.  This will apply to all teachers hired at January 1, 2019.  Also, the age for retirement was raised to age 65.  The state also took away the right of teachers to use sick day accrual to average in their retirement.

The fact that this was all tacked onto a bill to deal with wastewater lays clear the Kentucky Republicans’ fear of the backlash this would cause.

And then there’s the state’s proposed 2-year budget, which would actually lead to teachers losing their jobs across the state.  For example, in the Fayette County Public School district in Lexington (the 2nd-largest city in the state), over 300 teachers’ jobs are at risk.  And that’s just 1 of the 173 school districts across Kentucky’s 120 counties (hence the hashtag #120strong).

Not surprisingly, the pension ‘reforms’, combined with the budget cuts will be more than slightly detrimental to the future of Kentucky public education.

The wildcat strike that began on Friday in Kentucky continued yesterday, as thousands upon thousands of teachers, students, and their supporters descended on the state house in Frankfort.  What’s even more remarkable is that the #120strong movement is a true grassroots movement.  It is organized by teachers of all political stripes, seeking to take on the laziness of Kentucky’s politicians.

It is encouraging that teachers are standing up to defend public education, to say nothing of their own job security.  It is also cliché to note that teachers are educating the next generation of Americans.  And they’re under fire.  The quality of public education in the United States has been in decline for years, something I certainly notice in my own classrooms in university. But part of this is the burn-out of teachers, as they are being asked to do more and more with less and less.  This is also not an issue we can dismiss as not being our concern, whether we have children in public school or not, the stakes are high.

And lastly, do you know which group’s pension the Kentucky legislature did not cut?  That’s right, their own.