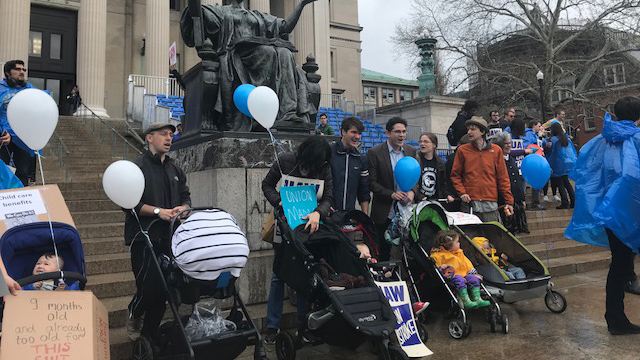 The week has dwindled but our energy has not. This is immediately clear to me when I see the strikers start to crowd in around the check in desk at 11:00 sharp, even as rain begins to fall.

Today our sign-in table and tent are set up further down from the sundial, as a number of barricades have now been set in place, blocking off our usual spot – not a coincidence, I think. I fumble myself into a poncho and ‘UAW on strike!’ sign, and as has become my custom throughout the week, I grab an orange bucket and wooden stick and head off to Broadway, drumming cheerfully as I follow the picket captain.

Following our tradition, we march the morning shift by disrupting the main gates of Columbia. The picket line quickly gains energy and soon it’s stretching almost between the two subway entrances on 116th and Broadway. It’s raining but we don’t care; picketers are wearing blue UAW ponchos and holding umbrellas and we’re as psyched as ever; honks fill the air along with our signature chant – ‘What do we want? Contract!’ – as strikers wave signs asking drivers and trucks to honk for workers. People stand by and watch; a few are bewildered or amused, but most regard us with interest and support, and several bystanders take photographs and videos of our line.

Some try to cross the line. ‘Good for you’, one of the crossers says to us sarcastically as we sing ‘Picket line means – don’t cross!’ in her direction. Another passerby gets in front of me and joins the line so he can pass through the gates without obstructing us. ‘Picket line means, don’t cross,” he joins in our chant, grinning at me.

At noon we march back on campus and join with the Amsterdam picketers as our two lines coalesce and we do our march around Low: ‘One, we are the union, Two, a little bit louder…’ This time we have bullhorns, and as the chants echo around campus, I both feel and hear what I know to be true: this is our campus.

By no means are the strikers antagonistic, though. Everything I’ve seen in the past week points to the fact that our movement is friendly, peaceful, youthful, and one of spirit and camaraderie, and it is why I think our strike has been so successful so far.

We come back to Low for the rallies. I recognize one of the Local 2110 staff workers, and I realize, with a kind of jolt, that this is not the first time he or others of our fellow union members have come out to support us, and I know that they’re skipping lunch breaks to do it. The word ‘solidarity’ has suddenly come to have a whole new meaning for me. The 2110 staff are not the only union members who have come out to our campus today; Communications workers of America, and representatives from graduate worker unions at CUNY and NYU, all join us today and give speeches in support.

The day’s highlight, is, of course, the brigade of our youngest and cutest supporters: baby strollers, tied with blue and white balloons, are positioned above Low steps along with attentive parents. The babies and children are as happy to be there as we are. Alma’s baby – the child of the graduate worker mother who organized the brigade, and who is becoming something of a social media hit – smiles at us all, and everyone coos and takes photos. ‘I’m 9 months old and already too old for this shit’, the sign in front of him reads. Childcare is a worker issue, and also – let’s face it – a gender equality issue issue, Alma argues in her speech, and we cheer in agreement.

It’s hard to say which of today’s speeches are most memorable, for they are all fantastic. Along with Alma’s and the union members’ speeches, there’s the City Comptroller, who assures the Columbia administration that he’d ‘done the math for them’, there’s Professor Ross from NYU, who declares that faculty must decide whether they are management or labor, and our very own Professors Guridy and Foner from the History department. ‘You are both students and workers at the same time – it’s not that complicated a concept really’, Professor Foner says.

No, it’s not complicated at all; and in fact, intersectionality is a core theme of today’s speeches, where the emphasis is about how, through unionization, we can create our own university community, one where we define the rules. Why, the speakers ask, not build a community which actually works for all of us – workers, women, folk who are LGBTQA+, people of color, low income families, and all our intersecting identities – rather than one that benefits the few? Alaa and Kate’s speeches on 24/7 healthcare exemplify this notion. Alaa’s scathing criticism of the university’s contribution to stress culture and its complicity in the perpetration of sexual violence against the most vulnerable of its members, made worse by its failure to provide healthcare and support for those who need it the most, could not be more acute. The vision our speakers and our union inspires instead is of a community that rejects patriarchy and corporatism and instead has the audacity to focus on the well-being of its actual, very own members: the students and the workers. The cynical and the powerful will undoubtedly object, but this report is not for them.

There are more wonderfully supportive speeches after pizza and a quick but lively picket of College Walk; the sky has started to clear, and I thankfully discard my poncho. We crowd around the speakers, drumming and chanting and cheering them enthusiastically; we’re all honored and grateful to see that the New York City Council and assembly members have come out to join and support us. ‘This is the best picket line I’ve ever been to’, declares Michelle Winfield, New York State Committeewoman.

Finally comes my favorite part of the day and possibly the week. We round up for a march around campus, hundreds of us in a single procession. We are close together and there are at least four or five drummers alongside me. The pace of the chants has quickened; there is now a note of urgency and anger as we thunder past Low, behind the business school and towards the engineering buildings, back to Low and then down to Lerner and past Dodge, and then one more round. The space between buildings is small and our march is large, and our sound is amplified. We pass our fellow campus workers and wave at each other; students and faculty who pass us nod along with our rhythm. We march until the picket closes for the day, and something is now clear to us to all; we are now out in the open, and there is no going back. 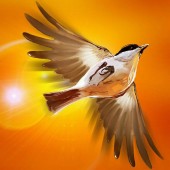 Noura Farra is a a PhD candidate and graduate worker in computer science at Columbia University, and bargaining committee member for GWC-Local 2110. Her thesis research focuses on sentiment analysis technologies for multilingual and low-resource languages, for which she is also funded by a research grant. She is an international student from Lebanon.