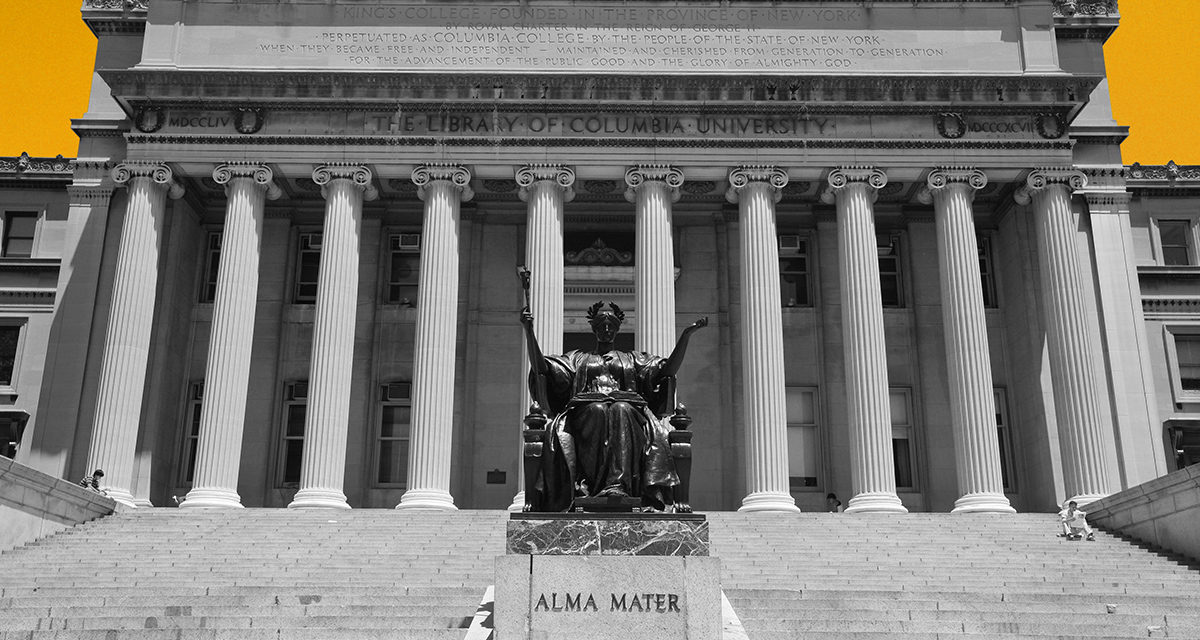 A year ago, at the lunch honoring awardees of the Pulitzer Prize, Columbia President Lee Bollinger remarked that “the more bleak the world becomes—the less people seem to care about what is true and what is false.” By “people” he clearly meant President Trump and those who take his diatribes against the press in stride. Bollinger could safely assume that his audience of distinguished journalists would know which side he is on. Not only is he a renowned scholar and defender of free speech, but within days of Trump’s 2017 executive order restricting immigration from seven Muslim-majority countries, he had leapt into action, offering special resources to “dreamers” and foreign students and denouncing the ban as “discriminatory, damaging to America’s leadership in higher education, and contrary to our nation’s core values.”

On the day when President Bollinger spoke and his audience listened and lunched, Yale graduate students were on a hunger strike, protesting Yale’s refusal to bargain with the union that the students had voted to form. In an effort to destroy the union, Yale had hired the union-busting law firm of Proskauer Rose. It’s the same firm that Bollinger himself was, and is, paying in order to break the graduate-student union at Columbia. When the Columbia students won a vote to form a union in 2016, the Columbia administration refused to recognize it and instead appealed to the National Labor Relations Board. When the National Labor Relations Board confirmed the results of the vote, the Columbia administration again appealed. By the time of the appeal, Trump was in office, and it was clear to all that Bollinger was stalling, waiting for Trump to appoint Republicans to the NLRB so that the previous ruling could be overturned. Where it counts–where it touches on the labor that makes Columbia University run– Bollinger has unambiguously aligned our great university not with free speech and enlightenment, but with President Donald J. Trump.

When this year’s Pulitzers were announced a few days ago, nothing much had changed. As the Times reported (April 17), “Mr Trump’s lacing attacks on the press … were an uneasy backdrop to the awards, presented annually by Columbia University to recognize excellence in journalism and letters.” As host and judge of the Pulitzers, Columbia was perhaps hoping to bask in the anti-Trump glow of honors awarded for reporting on Trump’s collusion with Russia and on the #MeToo movement. But how good can the administration legitimately feel? Bollinger and the trustees have called on Donald Trump to be their fixer.

By their fixer shall ye know them.

The problem the Columbia adminstration is asking Trump to fix is the unruly graduate students, who have been demanding the recognition of their duly-voted and legally-certified union. But the students have their own PR problem. Like Stormy Daniels, they work at a job that does not automatically win the public’s sympathy or solidarity. To many, and not just to Trump’s base, they look like a privileged group. Even after voting to strike–the strike that began today, April 24th– they do not look like the striking schoolteachers of Kentucky or Oklahoma, who have been so wildly underpaid. After Trump’s frequent dog-whistles to the uneducated about so-called “liberal elites,” they cannot count on a flood of contributions to their strike fund.

The facts of their supposed privilege are these. The average PhD stipend in the US is about $30,000, and that is taxable income. (The average salary for elementary and middle school school teachers in Kentucky is about $50,000.) $30,000 per year might still seem a reasonable deal if the benefits were good, the PhD could be finished in 3 years, and there was a pretty fair chance of a better income afterwards. As it happens, PhDs generally take closer to 6-8 years and the chances of a better income afterwards are not good at all. Over 70% of all instructional appointments in the US are now non-tenure-track. If grad students had even a 50/50 shot at moving from the PhD to a tenure-track position, it might make sense to think of them as a privileged group. The fact is, however, that well more than half of them will not get the chance to grab onto even the lowest rung of the tenure ladder. And if this is the end of the line for them, academically speaking, then we have a moral obligation to make sure that their job is a decent job.

As for the benefits, one reason for the unionizing drive at Columbia was that the administration decided to nickle and dime them on dental insurance. (This is not a trivial detail.) In order to save some money, Columbia abolished the option of comprehensive coverage, offering only one visit per year, one cleaning, and a 10% discount on emergency treatment. The cost of subsidizing comprehensive coverage for all grad students was estimated by the students at $960,000, presumably a good deal less than the adminstration is paying Proskauer Rose.

In the memo sent to faculty members, the university administration complained that allowing a union in a private university would plunge us all into a terrifying new world of uncertainty. In fact, uncertainty is what graduate students are already living with. They had no say at all in whether they would have comprehensive dental coverage or not. The university decided whatever it liked, whenever it liked, with no input from anyone. If it had to negotiate with a union, that would change.

No, the grad students are not in the same situation as employees of McDonalds or Walmart. (Those employees too should get better wages and benefits.) But it was still a shock to learn, from documents leaked during the unionization campaign, that the Columbia administration’s memo to faculty followed rather closely Walmart’s advice to its managers about how to fight unionization. What are non-profits like us doing in the company of these for-profit corporations? Corporate ruthlessness about employee wages and benefits is ugly, but at least it makes sense in terms of corporate principles, questionable as those principles are. Universities are supposed to have higher principles. They are exempted from taxation because they are supposed to be operating in the public interest.  How is it in the public interest to make sure that the people who do the university’s essential work have no one to support their interests and grievances but must depend instead on the hypothetical good will of their employer?

Last week, members of the grad student union voted to strike by 1832 to 136. No one wants a strike. But it seems unlikely that the Bollinger administration will call off its fixer.