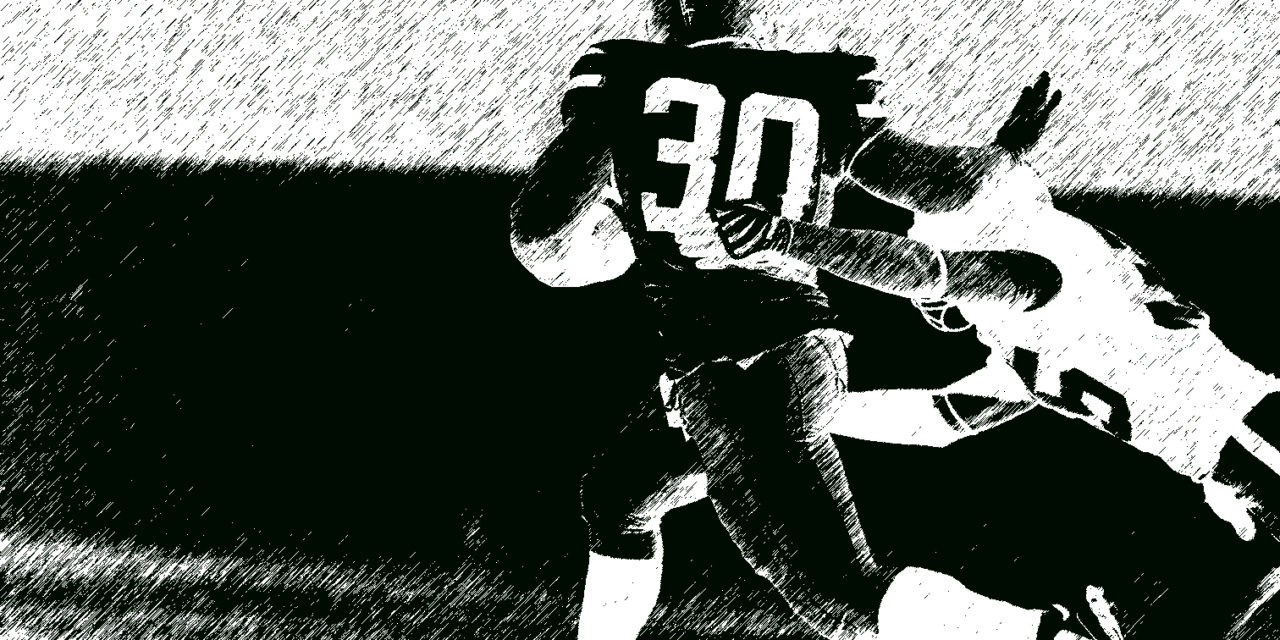 It’s Super Bowl Sunday. This year, for the first time in my life, I didn’t know which teams won their conference championships—who was going to the Big Game—because I hadn’t watched any football on TV, and hadn’t read about it, either. It’s not that I didn’t care, I just didn’t want to observe the slaughter. I wanted to abstain because knew I’d be drawn into my memories of self-slaughter, Augustinian-style, in the confessional mode.

But I watched the whole thing, eating chips and guacamole, drinking beer, hoping the Patriots would lose, laughing at the commercials, howling about the missed calls and the wrong match-ups, regretting every minute of it even as I lived it.

Four years ago I was arguing in class that the abolition of football was imminent because the evidence of physical damage to the players themselves was too detailed and convincing to let the spectacle continue. I figured that in view of this evidence, parents would stop sending their kids off to Pop Warner football teams, and start sending them to soccer camps. But then I had already tried that strategy with my own son, and he ended up unconscious on a football field in his senior year of high school.

Everybody is now aware that chronic traumatic encephalopathy is a major problem. Concussions caused by head-to-head collisions rattle the brain, causing its decomposition, and, in the long run, even dementia. But new research indicates that even absent such collisions, the brain is traumatized by the physical violence inherent in the game.

C.T.E. is currently the NFL’s worst PR nightmare. Colin Kaepernick and his comrades come in a distant second, notwithstanding the buffoon-in-chief’s angry pronouncements. When the river of talent dries up at its origin, in those silly midget games staged by Pop Warner—because parents finally realize they’re sending their sons into harm’s way—football’s constituency disappears. Further on up that income stream, the NFL dies because the foot soldiers, the gladiators, the combatants, call them what you want, have been diverted to other callings.

Now C.T.E. is the headline story of this emergent crisis. But think of the collateral damage, the physical toll of all those collisions: it’s immeasurable, long before and after anybody gets to the NFL. Altogether I played seven years of tackle football, in pads at full speed, unto a brief college career that ended—praise the Lord—with the wreckage of my right knee, which had already been twice injured. My little brother played eight years, and faces similar bodily wreckage. By now I’ve had both knees and a hip replaced, meanwhile enduring four back operations. My brother has had both hips replaced and two back operations, plus an old knee operation that will soon devolve into a choice about replacement or not.

Of course I’m getting older, and so is he. But c’mon. Everyone who played football at any level knows why he hurts where he does.  It’s a beautiful and intricate game—look, the offensive line listens to the center explain, in code, how to block the called play according to what he sees the defense doing, everybody else listens to the QB make the necessary adjustments about the structure of the defense he sees, and the play unfolds as receivers change their routes according to the coverage, as they come off the line of scrimmage.

But the incidental collisions cost too much in life and limb. They break you down. Maybe they even kill you, if your brain was rattled too many times.

So now we ought to ask how the games ended in Rome, officially in 404 A.D. And what replaced them as a satisfactory sport that could entertain the masses—for that is the question for college as well as professional football.

Not as they’re presently organized, as random enterprises with no purpose beyond “generating revenue.” Rutgers University, where I teach, has recently joined the Big 10, for reasons that are indecipherable beyond sports revenue and a higher national profile to attract out-of-state applicants. The sports revenue will never materialize, of course—there is no net academic gain from big-time athletics, ever, no matter where you look—and Rutgers has no classroom space for increased enrollment, so any tuition benefit will be cancelled by the state legislature or forfeited to the students’ futures.

And the revenue from the stadiums and the local spending for cities that host the teams? Gimme a break. Every penny of it has been always already nullified by the municipal tax breaks—in other words, extortion—that the owners exacted, and by the parking lots that consumed the surrounding neighborhoods, and by the toll the weekly spectacle takes on everyday life, on the roads and in the neighborhoods. Let’s face it, this business model doesn’t work, except for the vampires who own the franchises.

So, I would like to think that the end of this beautiful, intricate, and idiotic sport we call football signifies the eclipse of the American empire, just as the end of the gladiatorial games in the twilight of the Roman Empire signified the change of moral season which determined a new climate of opinion on the meaning and value of human life itself.

But that wish probably makes me sound stupid. So I will leave you with St. Augustine’s account of his friend’s encounter with the Roman games, late in the 4th century A.D. His name was Alypius. He was a well-educated Stoic, who knew he could remain immune to the violence of the games. Look at what happened to him.

“The minute he saw blood, he was drinking it like an animal, and sat transfixed, unable to turn away. With eyes glued to the spectacle, he mindlessly gulped frenzies. He took a complicit joy in the fighting, he was drunk with delight at the cruelty. No longer the man he was when he entered the stadium, he was now sunk in the mass, no different than the crowd that had brought him there. Worse—he stared, he screamed, he burned with passion, the madness he found there followed him everywhere, and he returned to it, bringing others . . . .”

I know that feeling. The trick is to stay away.