Installment 45 moves complexly between literal sites of commemoration, and the sociopolitical policies of amnesia forged by communism throughout Eastern Europe. While revisiting a specifically Yugoslavian place and rite of abandon, this poem also challenges: what atrocities and whose mass graves is our own culture is willing to forget in order to thrust forward, unburdened?

Parking Lot in the Memorial Forest

In the south of Serbia, above the city of Niš,
there is the Bubanj hill. During
The Second World War in Niš existed
a concentration camp – no gas chambers –
the inmates were driven by trucks to Bubanj
and shot.

There are a lot of mass graves on Bubanj hill with
Communists, Jews and Gypsies … When Tito´s partisans
liberated Yugoslavia from Nazism
a large monument was built on the Bubanj hill:
three huge concrete fists as a symbol of
resistance to fascism and the whole hill was planted with
tough sprouts of acacia trees – a memorial park was created.

After 40 years, the acacia trees on Bubanj grew up
and the forest became a favorite destination for young couples
making love who could not find another shelter
and also of lovers for whom having sex in motels was indiscreet

In the early summer when the acacia smelled, there were moments
when cars between trees were parked
one next to the other in the beautiful harmony of the car sheet
of all colors and types from the East and West (communism in Yugoslavia
was liberal) and a shady greenery of the acacia forest.

As a student I drove Citroën Dyane,
and that little student car was my traveling house
through which all loves of my youth passed.
Citroën Dyane and Citroën 2CV were popular cars with us
but when I went shopping in neighboring Bulgaria, the country
of hard communism, my Dyane with her thin sheet
and a canvas roof – between the cars
such as GAZ, Volga, Lada and Chaika – it looked like
a school girl in the line of armored soldiers.

I remember the man who ran to the parking lot in front of the MALL
in Sofia – he asked with all his breath, “Did you make it yourself”?
It was the late seventies or eighties, life
was stable and light, without much worry

And one of the big worries was how to find a parking lot
in the acacia forest on the Bubanj hill. I was driving a few times around
and around searching for a free tree next to which I could
pull my Dyane and then I stopped the big wheels
in the mud on the approach of the forest … We waited, but the couples did not hurry.

Below the concrete fists of resistance against fascism we had heavy petting
and kissing, waiting for our place in the memorial forest,
to show up our irritated organs and go forward onslaught

I do not think we were aware of mass graves,
nor the character of the forest – we were lost in the forest
of pubic hair. 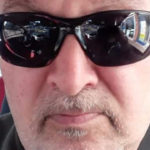 Dimitar Anakiev is a medical doctor, poet and filmmaker from ex-Yugoslavia. He currently lives in Slovenia.