From the Vaults: The Singles Soundtrack 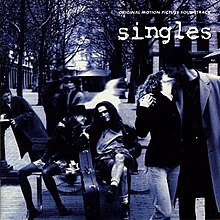 It’s never going to be a good day when you wake up with Paul Westerberg’s first track from the Singles Soundtrack in your head.  That’s right, I woke up with ‘Dyslexic Heart’ in my head yesterday and suffered for my sins, with both a sick dog and a migraine.  Good times.  I don’t like slagging artists, but ‘Dyslexic Heart’ might be one of the worst songs ever written, and this is Paul Fucking Westerberg we’re talking about here.  This one track is probably the only horrible song he’s ever written.

I got to thinking back to 1992, though.  It was a good summer, I lived in Ottawa, played some music with friends, went down to Montreal a lot.  This was almost literally the soundtrack to the summer.  For me, the two best tracks were the last two, The Screaming Trees’ ‘Nearly Lost You,’ and the Smashing Pumpkins’ ‘Drown.’  Me and my buddy Dave had got into the Pumpkins the previous fall, with their début album, Gish.  For my money, it remains one of the greatest albums of all-time.  As for the Trees, well, this was the thing with the film Singles and the soundtrack, I grew up in Vancouver, I knew all these Seattle bands already.  The Trees were one of my favourite bands.  Also worth pointing out that the ‘fashion’ of grunge, the flannel, ripped jeans, long johns, Doc Martens and Chuck Taylors, well this was also old news to me; the climate is just as wet and miserable, if not more so, in Vancouver.  So it was kinda cool to see the bands collated and put in one place, give or take a Nirvana or two, and to have my chosen outfit now trendy outside of the Pacific Northwest.

For me and my friends, though, Paul Westerberg in 1992 was the cranky old man.  He wasn’t the only oddity on the album, the Wilson Sisters (you know, Heart) also appeared as The Lovemongers, but that was because Nancy Wilson was married to filmmaker Cameron Crowe and they were from Seattle.  Hendrix was on because, Hendrix.  So Westerberg was the oddman out.  And he seemed ancient to us.  In reality, he was 34, much younger than I am now.  But he was a decade into his career.  As the frontman of the legendary Replacements, Westerberg was a colossal fuck up, drunk, stoned, and rocking out (along with the rest of the Mats, as they were known).  By the early 90s, the Replacements were done and Westerberg was maturing.  And so I guess he thought ‘Dyslexic Heart’ was what mature music sounds like.

His other track on the soundtrack, ‘Waiting for Somebody,’ was ok. Not great, not horrible.  We usually fast-forwarded Westerberg’s and the Lovemongers’ contributions to the album.

But, anyway, as I suffered through my day, I got to thinking hearing about an ‘expanded’ Singles soundtrack, released last year.  Most of it is, well, b-sides, out-takes and whatnot.  There are, interestingly, a handful of solo tracks from Soundgarden’s frontman, the late Chris Cornell (the expanded version was released the day after he died).  They show another side of him, deeper, darker than came through in his music with Soundgarden at the time.  (As an aside, there is also an early version of his worst song, ‘Spoonman’ here).

So what happened?  Really, to me it seems that Westerberg got a bad case of the Springsteens in recording these two tracks.  The Boss is the Boss for a reason, he writes great songs, has a great leather lunged voice, and a sharp eye for social commentary.  But, unless it’s just him and his guitar, Springsteen has a tendency to ruin his songs with over instrumentation. Keyboard flutters here, extra percussion there, and so on.  And then there’s the over-production with Westerberg’s tracks.

It’s unfortunate, because the demo versions, as well as two other, non-album tracks (‘Blue Heart’ and ‘Lost in Emily’s Woods’) show a brilliant song-writer at work.