Shad — A Short Story About a War 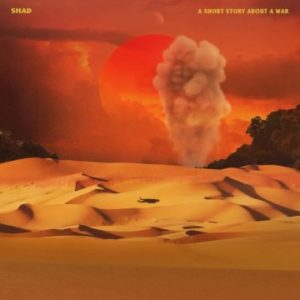 A Short Story About a War
Secret City Records

Shad is a long-time underground Canadian hip hop icon, and also hosted The Q on the CBC following the deposing of the previous host for being a pig.  He also hosted the brilliant eight-part documentary series, Hip Hop Evolution, which originally aired on HBO Canada, though it’s now streaming on Netflix globally.  Evolution was a 2016 Peabody Award winner.  In short, Shad is a heavy duty dude.  He is also one of the most versatile rappers I’ve ever heard, he can drop any kind of rhyme on time.  And he’s smooth.  Shit, if there was any justice in this world, Shad would be selling a billion albums a year and Kanye would be a nobody.

Working with a veritable who’s who of Canadian hip hop, including the nearly ubiquitous DJ Kaytranada, Shad attacks our world, but, in working with a variety of people from across the country (he’s from London, ON, but is Toronto-based), he also explores some of the regionalisms of our country.  A Short Story About a War is a concept album, about a war no less.  Shad argues he is holding a mirror up to society as a whole, making us look at ourselves and issues such as migration and immigration, the environment, greed and politics, and the human spirit.  If nothing else, Shad is optimistic, usually.  Across the album, The Fool is caught in a war controlled by forces larger than himself: The Snipers, The Establishment, The Revolutionaries, and the Stone-Throwers.

Particularly stand-outish tracks include ‘Magic’, in which Shad attacks our complacency:

See it’s kinda like magic, huh
They cause a distraction then poof
All that we have disappears and we clap
Then forget that it happened…

Gone is our land, our language, our history
Ancestry, families vanish like it was magic
Gone is our greatness, our sacred places
And practices, suddenly we feel vacant
We saw them take it though
Our hands lift from the earth.

And then there’s homelessness in Toronto, in ‘Another Year.’  Forgive me for another lengthy quotation of the lyrics, but this shit is just pure gold.  Also, it takes a certain kind of local knowledge to fully appreciate these lyrics [full disclosure, I’m not a Torontonian.  I’m from Montréal.  I grew up in Vancouver.  I also lived in Ottawa.  In other words, I spent most of my life in Canada trying to avoid the self-proclaimed ‘Centre of the Universe’):

Another year in Toronto
Another drunk in a bar
Barf in a parkette
Another dunk for DeMar
More junk of the hearts
Beats in the trunk of the car
On a hard drive
I’m talking from The Junction to Scarbs
Trump is in charge
And they trump up the charges
Told my man that maybe he should move up here
But we get bumped to the margins
Marved:
Many kids starved
Mumbling bars
We’re numb to the numbers
Of people sleeping under the stars
Can’t argue that the lump isn’t large now
Greed is a sickness
Far worse than that lung full of SARS
We’re number 1 in the charts

Long and short, this is Shad’s sixth full-lengther.  And whilst numbers 1 through 5 were excellent, A Short Story About a War is his pièce de résistance.