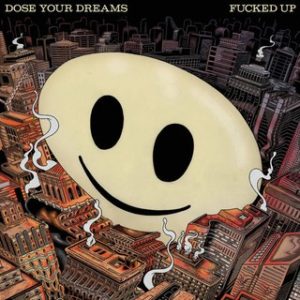 Fucked Up have a problem.  That problem is simple, their distinctive sound comes from Damian Abraham’s voice.  Abraham has dominated Fucked Up from the getgo in 2001, the founder and leader of the band and the primary driving creative force behind the band.  After 2014’s Glass Boys, though, Abraham hinted that he was ready to walk away, at least in part.  And so we get Dose Your Dreams. The bulk of this album was written by guitarist Mike Haliechuk and drummer Jonah Falco.  Abraham was only called in later to provide some vocals and the result, horror horror, he only appears on something like 70% of the tracks.

Fucked Up have always been referred to as a ‘hard core’ band. Please. The only thing hard core about them was The Voice. You take that away, and they’re just another rock band. And Dose Your Dreams seems like the album where Fucked Up tried to find out what they sounded like without the Big Fella on vocals. And then panicked and called him up when they realized they sounded like another rock band.

It’s not that Fucked Up sans Abraham are awful. Far from it. They’re actually quite good. It’s just that they’re generic in that nothing stands out about them. Or they sound like Dinosaur, Jr., at least on ‘Came Down Wrong,’ upon which J. Mascis provides the vocals. Take for example, my favourite track, ‘Normal People,’ which actually does not have Abraham on lead vocals. Instead, it’s Haliechuk and we’ve got a sleek, post-new wave track about, well, normal people. And then the Big Fella comes riding in about halfway through the song, apparently being the normal person the song is about. He comes in like a crashing wave, obliterating much that his voice falls on top of. But he makes it a Fucked Up song.

Away back in 2008, I was obsessed with Fucked Up’s The Chemistry of Common Life, their Polaris Prize-winning album.  In particular, I just couldn’t get enough of the track ‘Crooked Head.’  It got to the point where my students, after seeing me pull into campus with this track blasting, began to call me Crooked Head.  But one day, I realized that if you took away Abraham’s bellow, Fucked Up were just a hard rock band.  And pretty much their entire ouevre, even their kinda hardcore roots (only hardcore due to the speed of the music), it has been thus.

Dose Your Dreams is a killer album. Make no mistake. Haliechuk and Falco’s songwriting is top notch. And, as Hailechuk  noted in an interview, this is Fucked Up going for maximalism, a glorious mixture of their hardcore roots with psychedelia, and even some doo-wop (not their best idea) to the shear rock wall of sound.

Apparently Haliechuk and Falco have resurrected David, the star of Fucked Up’s punk opera, David Comes to Life (2011).  The long and short of that story is David is working at a lightbulb factory in England, gets radicalized in the 1980s leftist sense of the word, blows something up, but also blows up the love of his life and he ends up back at the lightbulb factory by the time Glass Boys comes out.  It is really hard to follow the story on Dose Your Dreams, and, really, it doesn’t matter.

Ultimately, something is very different. Up to their 2014 album, Glass Boys, I always came away from listening to Fucked Up feeling like I’d been pummelled for 45 minutes. It was glorious (once a punk, always a punk, apparently). With Dose Your Dreams, though, I come away feeling like I just want more and more. I listened to this album on repeat for nearly 4 hours this weekend grading (yeah, not the most punk thing to do, sue me). So maybe Fucked Up have a new way of doing things. Whatever, just listen to the album, maaaaaannnnnnn.