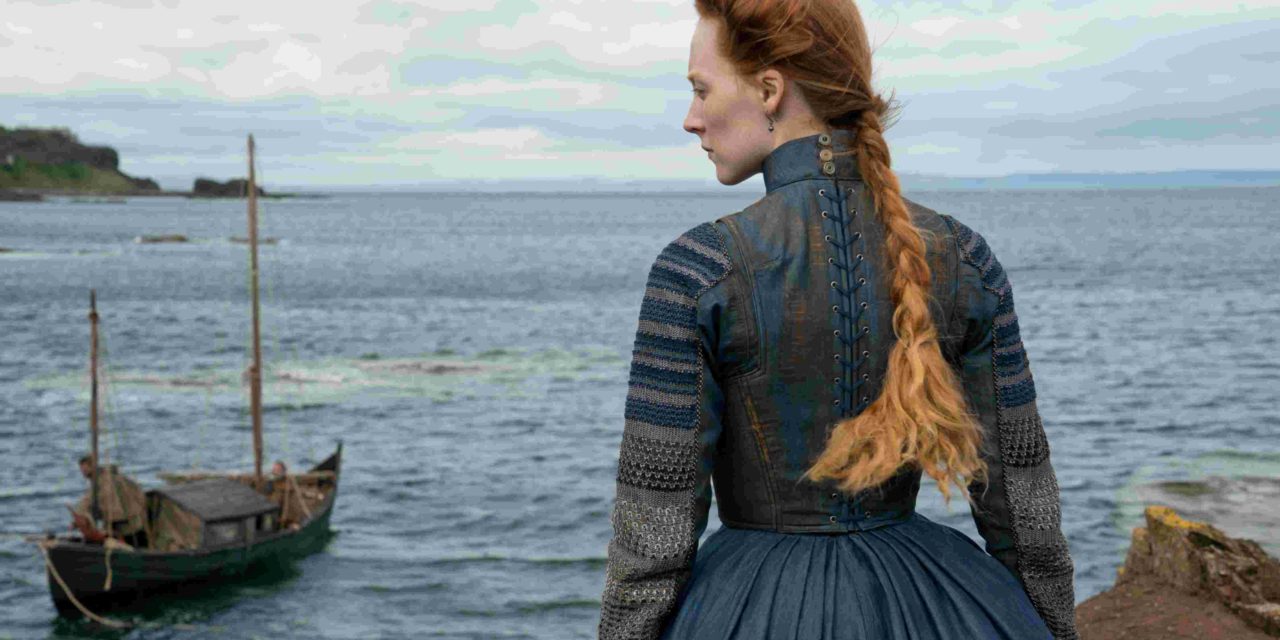 I saw the film Mary, Queen of Scots at a screening accompanied by a short panel discussion in which various scholars specializing in sixteenth-century political and feminist history discussed the film’s representation of its period and characters, namely the two famous women at its helm: Mary, Queen of Scots,and Queen Elizabeth I. Our crowd had a lot of questions, mostly concerning how/whether the cinematic renderings did justice to their real-life counterparts. I’m guessing they asked so much within this theme because they, too, were put off or perplexed by the obvious and gauche liberties the film takes.

What’s interesting to me, though, is which liberties it takes. It is fastidious about many historical details (layman’s example: I once read a letter from a courtier about how Queen Elizabeth asked him how accurate a painting of her cousin Mary actually was, perhaps in an attempt to gauge her prettiness, and that detail was in this movie) but weirdly lax about others. Maybe the biggest lapse is how Elizabeth I, one of the most powerful rulers in Western history, as well as (by the way) a character with many formidable screen portrayals from Bette Davis to Quentin Crisp to Judi Dench, is represented as, in the words of panelist Julie Crawford, “a hot mess.”

In Mary, Queen of Scots, directed by Josie Rourke, Mary (Saoirse Ronan) comes home to Scotland in 1651, newly widowed and eighteen years old.This is her first time back since she left for France at age five, betrothed to the future King. Scotland is as she left it (it’s still damp and Catholic), having been ruled in her absence by her bastard (in more ways than one) half-brother James Stuart, Earl of Moray (James McArdle). Mary has passed up several royal marriages which would have installed her as Queen elsewhere; her sights are set on England, which is ruled by her cousin, Queen Elizabeth (Margot Robbie), whose legitimacy as a ruler is valid but precarious. Elizabeth is the daughter of Henry VIII and Anne Boleyn (for whom he invented the Protestant Church of England, after the Pope forbade him from divorcing his Catholic wife Catherine to marry Anne). Elizabeth is the last among her siblings to achieve the throne,after the deaths of her younger Protestant half-brother Edward and older Catholic half-sister Mary. Elizabeth’s royal status is built on this heap of precedents and technicalities, and the traditionally-royal, Catholic Mary of Scots poses a threat to Elizabeth’s rule with her very existence.

Mary wants to be named Elizabeth’s successor, which Elizabeth and her Protestant privy council, including her Chief Advisor William Cecil (Guy Pearce), decidedly do not want, lest it mess up the national religious situation and/or inspire a deposition attempt, among other things. These women are productively established as political rivals. But then the movie hijacks itself (for lack of a better word), swerving into a series of appalling plot points about their feminine urges and insecurities. This detour ultimately destroys the initial political framework and their professional characterizations. The film stages this by setting up the two women as counterparts, whose feelings echo but deeds contradict each other.There is no real argument contained in this, other than the determination that Elizabeth ultimately sells out her sisterly alter-ego.

Their tense dance grows grittier when Mary is determined to have a baby who will become a legitimate heir to both countries. To do this, she has to marry. She ends up foolishly choosing a suitor who is (in the film) controlling, abusive, alcoholic and secretly gay(also, her cousin, but as one of the panelists piped up, the film leaves this out). He, Henry Stuart, Lord Darnley (Jack Lowden, sporting the kind of mustache worn by silent film villains who tie women to railroad tracks) is a treacherous guy, having sex with Mary’s friend-secretary David Rizzio (Ismael Cruz Cordova) on their wedding night, and trying to grab her power in numerous despicable ways. One of the worst things about this movie is its implication that Mary chooses him as her fiancé after he pleasures her without asking for pleasure in return. Yes, that is apparently Queen Mary’s sole criterion for apolitical marriage. This is probably fashioned to emphasize just how much the bad men surrounding her try to take things from her, and how sick she is of it. As a sentiment that’s fine, but the film’s offer that a powerful and savvy leader would be this naïve about political matrimony is a real kick in the teeth to history.

Elizabeth will never marry, not even her devoted lover/advisor Robert Dudley, Earl of Leicester (Joe Alwyn, in his second role this year as a handsome but boring historical boyfriend). She even goes around calling herself a man (Mary emphatically does not). But Elizabeth eventually goes baby-crazy; she wants a child so fervently, obsessing over a newborn foal, and bunching up her dress so her shadow will look pregnant. Crosscut with Mary’s agonizing childbirth scene is an equally agonizing (for the viewer’s brain) scene of Elizabeth frantically quilling paper strips,which, when they are swirled properly, she places in a long train between her widespread legs while sitting on the floor; an inane pseudo-mirror-image of the blood-and-birth-fluid-soaked sheets between Mary’s legs as she holds her baby son for the first time.

The film really goes to town on Elizabeth, not only making her distracted by her own lack of motherhood (despite the lack of historical evidence for this), but also making her politically impotent. While Mary struggles day in and day out in bleak, freezing-looking Scotland, with her male cabinet conniving to steal her power, Elizabeth self-piteously all-but-surrenders her power to her Privy Council, wearily telling them to go do whatever they need to but to leave her the heck alone to craft. The fact that she is making art is not the issue, and yes Elizabeth did produce tons of masterworks via paper in her lifetime (though largely as a writer). But Elizabeth I was one of the most politically astute and materially productive people in the history of the Western World, and this film means to imply that she chose not to go to work in any way and just sat around all day rolling paper with sticks? This film spans years… this film means to say that Queen Elizabeth didn’t go to work for years?

It is depressing how blithely and carelessly the film dismantles the impressive career of a female ruler—especially since there are scenes in which various sinister male leaders,led by a wild-eyed and creepy John Knox (David Tennant, under lots of hair), inspire crowds to chant things that sounds a lot like “lock her up!” in support of various defamations aimed at undermining Mary’s power and support. The film should know just how dangerous it is to erase and distort the oeuvre of an accomplished female leader.

The film does offer an explanation for its strange representation of Elizabeth, but it’s not redemptive. It’s the opposite: the film suggests, in part, that Elizabeth’s apparent meltdown and political malfeasance are related to her fears of becoming ugly and growing older. Problematically, the film sees these as the same thing.

Earlier shots show a youthful, luminous Elizabeth, with glowing skin and perfectly-coiled, luxurious hair. Then she contracts smallpox and starts screaming at people, and the camera loves it. Boils everywhere! Hysterical sobbing! She loses her hair, soon cakes her pockmarks in white powder, wears the gaudiest of wigs, and stuffs herself into giant dresses. She is also the only one subscribing to this fashion. Yes, none of the other Early Modern English courtiers look like this; Queen Elizabeth is the only one styled in the exact aesthetic that this entire time period is known for. Anyway, I have not seen a serious film in a long time that is so enthusiastic about ruining the body of a (young) woman.

Elizabeth is the only character, furthermore, who ages at all. Mary looks the same age throughout, even when she’s beheaded at age forty-five. Elizabeth grows clownish and grotesque as she refuses to truly save Mary after Mary ends up persecuted and scapegoated by her council, and thereby refuses to unite England and Scotland (the film argues: failing the nation). The writers have heard of “body politic.” Even in the film’s conclusion, during a (fictional) meeting between the two queens, Elizabeth whines about how she made an effort to look pretty to meet Mary. She shows her cousin her own balding head, saying that Mary’s “gifts” will be Mary’s “downfall.” Ultimately, female power and political operation are hitched to female physical appearances? Somehow Mary’s looks will cause her twenty-year imprisonment and execution for treason, and not her implication in a plot to assassinate Elizabeth? Or is Elizabeth actually saying she’s going to resent Mary until she kills her for looking more beautiful and not having been marred by smallpox?

It’s worth stating the obvious: that Mary’s body is also abjectly ruined, and just as symbolically, though differently. Throughout the film, it is done with sexual and physical violence,usually at the hands of her awful husbands—there’s one more, after Henry Stuart: James Hepburn, Earl of Bothwell (Martin Compston), and he forces her to marry him. But the film does not scar her, and renders her countenance pristine and youthful, perhaps because she’s doing all this to be able to produce a baby boy (a Catholic heir to a formerly-Catholic kingdom). Her true ruination will come with her beheading, but it will be represented as a martyrdom (as it was in life). Her apparently untarnished youth will be cut down by the order of a woman who has accreted so much bodily distortion (wigs, makeup, ruffs, giant gowns) that she is barely recognizable as the same person who had a robust career before paper quilling.

To their credit, both of these lead actors are committed, with Robbie convincingly bilious and stiff and Ronan captivatingly fiery and resolute. But the film is little beyond a vessel for two solid performances. Everything the film does accomplish in its nominal representations of a politically fractious era, two strong women rulers, and the prevailing cultural misogyny that games their regimes against them, is wholly undone by the film’s gross preoccupation with their female bodies, and the suggestion that they were just as preoccupied with their female bodies themselves.

There are only two kinds of women, says the film: not good and evil, but those who choose to bear on behalf of others and those who don’t. Maternity, friendship, and policy are inextricably connected here. The film has to rewrite the past in order to shoehorn this link into place, and its effect is both pious and tired: a woman is a saint, or else she is a sinner. Either way, she’s definitely not a politician.