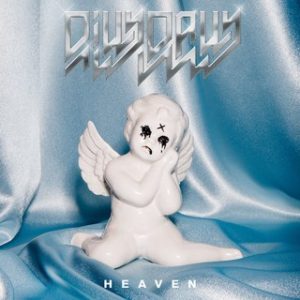 My generation is always dissing on the Millennials for this, that, and the other thing.  They eat too many avocados.  They think they’re the first generation to get screwed. And so on.  But one wonderful thing that the kids have done is give us a 90s alternative rock revival. Big, loud guitars. But they’ve taken Gen X one step better, it tends to be women behind these guitars.  Think Courtney Barnett.  Or Camp Cope.  Or Jenn Cloher (to be fair, she’s one of us, she’s my age).  And so on.  So that brings us to the Toronto outfit, Dilly Dally.  Along with having a great name, Dilly Dally bring the noise.

Their first album, Sore, came out in 2015, and was long-listed for the Polaris Prize.  And they toured the hell out of the album and nearly imploded.  So it took awhile for the band to recover and regroup.  And then, of course, the global clusterfuck of 2016-17.  And so, frontwoman Katie Monks had to dig deep for the songs on their stellar new album, Heaven.

Heaven hits hard.  Very hard, and lead guitarist Liz Ball hits like a tonne of Billy Corgan filtered through the past three decades.  Monks and Ball are like Corgan and James Iha Redux.  But I feel this does them a disservice, they’re not the Smashing Pumpkins II.  They’re better than that.  They’re rawer and more visceral than the Pumpkins, or really any of those 90s bands, could ever be.

This came across my desk last week and I vaguely remembered Sore, an album me and my buddy Sébastien rocked out to a few times.  But then I forgot it in a sea of other great music.  So I had expectations pressing play on Heaven.  Monks’ caterwaul howl floats over the guitars and thumping rhythm section.  Like a lot of the music I seem to be digging on these days, this is very much a document of the times.  We live in a scary world, there are too many things out there going bump in the night right now.  And Monks has written a collection of songs that seem to fit our era.  ‘Believe’ is a song of self-care, with the central message to ‘believe in yourself, because that’s the main thing.’  I particularly love ‘Sober Motel,’ written about the clarity of mind and body that comes with sobriety.  I find this is the track I keep returning to.

If Heaven isn’t shortlisted for and does not win the Polaris Prize in 2019, there should be a Royal Commission to find out why this miscarriage of justice has occurred.