Days of Future Past in Blade Runner 2049 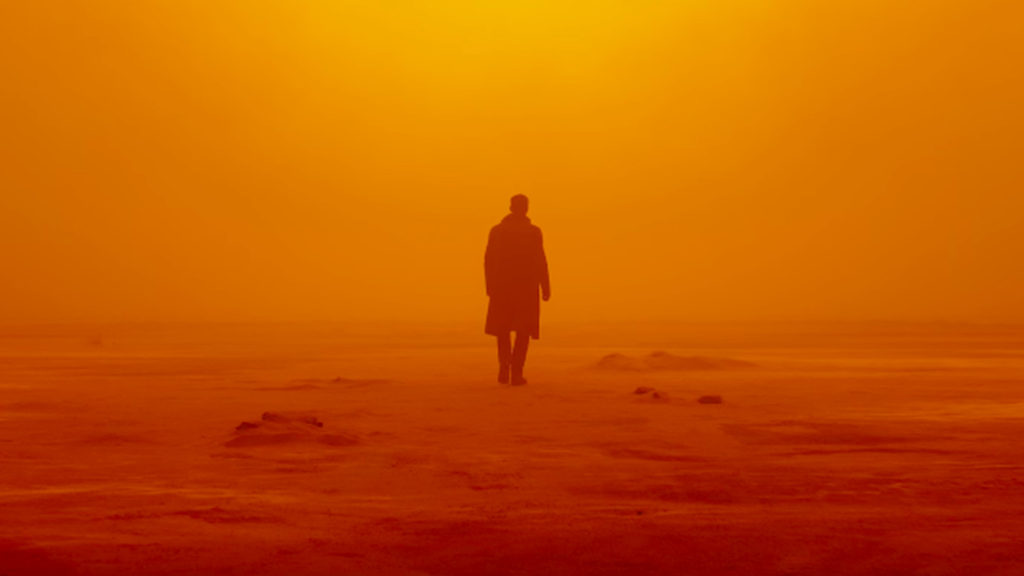 Ridley Scott’s Blade Runner is an epochal film. Its arrival in 1982 marked a rupture in cinematic and literary science fiction narratives, and spoke simultaneously to the transnational consumer culture of the Age of Reagan and to the burgeoning punk-inflected spirit of anti-globalism.

William Gibson sat in a dark movie theater that summer, about a third of the way through the manuscript of his first novel Neuromancer, watching Harrison Ford’s Rick Deckard navigate through the lo-glow in the rainsoaked streets of 2019 Los Angeles, his senses assaulted by holographic come-ons, in search of something that might have been humanity. It was celebration and condemnation; past-present-and-future in a single that extended the present-tense into a dystopian future as cultural critique.

Twenty minutes into the film, Gibson realized that Blade Runner validated his own dark cyberpunk vision, and that everyone would suspect he stole it from Ridley Scott. Although the film’s box office performance was mediocre, at best, Blade Runner marks the point where the imagined future of cinematic science fiction became the brooding Unheimlichzeit haunting our dreams of tomorrow. It helped birth the worlds of Gattaca (1997) The Matrix (1999) and Children of Men (2006).

Denis Villeneuve’s sequel, Blade Runner 2049, released this month, is less a film about the future than an elegiac meditation on futures lost. The hero, played by Ryan Gosling, flits about mid-21st century Los Angeles in the same kind of flying car that conveyed Deckard to the Tyrell Corporation headquarters in 1982’s version of the future, a Popular Science promise of the 1950s that we now recognize will never be fulfilled.

There are no cellphones, let alone smartphones (although there are drones); computers have CRT monitors; police detectives handle color photographic prints without a trace of irony or wonder. Indeed, it is only the fleeting image of a holographic ballerina bearing the slogan “product of the CCCP” that clues the audience in to what 2049 is all about: This is the future of the 1980s; postmodern, schizoid, all pastiche arrested in a perpetual present. Blade Runner spoke to the 1980s by projecting the present into the future, Blade Runner 2049 speaks to the 21st century by projecting the future into the past.

Inevitably, Villeneuve puts the past-future and the future-past into an uncomfortable, and frankly unsettling, conversation to expose our bleak present.

Perhaps that is inevitable, since 2049 is both an answer to, and a commentary on the earlier film. Ford’s Deckard is a “blade runner,” a cop tasked with tracking down and “retiring” (permanently) defective or unruly artificial humans manufactured by the Tyrell Corporation. These “replicants” were designed to be disposable slave labor on the off-world colonies, but in Blade Runner, a group of them led by Roy Batty (Rutger Hauer) have rebelled and returned to Earth in search of something resembling freedom.

Deckard’s mission is ultimately an inquiry into the nature of humanity, which begins in encounters with the all-powerful, godlike supercapitalist Eldon Tyrell (Joe Turkel), and an experimental replicant named Rachael (Sean Young) whose implanted memories make her unaware of her artificial nature. And it is this question at the nexus of memory and humanity that Blade Runner exposes in Roy Batty’s miraculous moment of mortality. Manufactured with a four-year lifespan, Batty meets his inevitable death in a driving downpour in the rooftops of Los Angeles. “I’ve seen things you people wouldn’t believe,” he says as his life slips away, “moments will be lost in time, like tears in rain.” For all of its dystopian dreariness, Blade Runner ends optimistically as Deckard and Rachael escape to a romantic, presumably happy ending. At the end, there is, after all humanity.

But 2049 offers little hope. Gosling’s K is a replicant blade runner, an artificial human cop who hunts artificial humans. When crime scene evidence reveals that a female replicant from Deckard’s time gave birth – an impossibility, as replicants are designed sterile – K is ordered to track down and “retire” her offspring. His trajectory parallels Deckard’s in the earlier film as he interrogates his own hopes, memory, and humanity, leading to an encounter with Deckard in a post-apocalyptic Las Vegas, where he shares exile in an irradiated pop culture playground with a holographic Elvis and Frank Sinatra.

In the end 2049, like Villeneuve’s 2010 film Incendies, is a tragedy of eternal recurrence and feedback loops; there is no escape from the past. In the final scene, an artificial human lies back under the sky, expecting the liberation of death, in the gentle brush of real snow, while a real human, imprisoned behind glass by biological limitations, exults in the beauty of imaginary snow. It’s an inverted, mutually-subverting moment of mimesis that simultaneously subverts the miracle of Roy Batty’s humanity at the end of Blade Runner. For Villeneuve, there is no humanity left, only memories that may not be real at all. It doesn’t really matter in the end.

2049 is a fine film, suffused with aesthetic references to Wim Wenders and, above all, Andrei Tarkovsky and Stanley Kubrick. Villeneuve expertly deploys layers of pastiche to tell a story absent of humanity about the absence of humanity. And he drives the point home with a touching subplot involving K’s relationship with his holographic girlfriend Joi (Ana de Armas): a tale of devotion, sacrifice and love between a replicant and an artificial intelligence.

There are, however, points where Villeneuve overreaches. The futuristic Pinocchio narrative, the messianic prophecies, and the deflected Oedipal tragedy all seem a little on the nose. 2049’s depiction of commercialized degradation of the flesh and the flesh-like, sometimes skids close to the prurient exploitation it is meant to critique. And Villeneuve’s fascination with the mysteries and miracles of female reproduction is an all-too-familiar trope that we’ve seen before in virtually every every post-apocalyptic science fiction movie since Omega Man.

The first Blade Runner was a great film because in 1982, when “postmodernity” was still academic jargon or a joke to fill the pages of Spy magazine rather that the universal condition of global post-capitalism, there was still a future for it to undermine. For all of its flaws, Blade Runner 2049 is a brilliant, darkly-moving, trenchant critique of the present and elegy on the past, but it declines to acknowledge the future at all. In the temporally-exhausted fetish market of 2017, there is no future; only the perpetual present of iPhone product cycles and immediately ephemeral tweets.