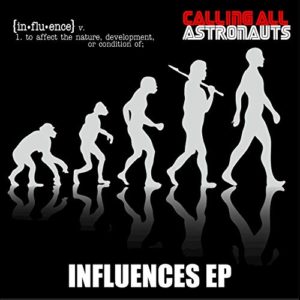 Sometimes, when you’re a big-shot music writer like me, with millions upon millions of followers on Twitter and an audience in the millions who read your reviews, a band or an artist will follow you on Twitter.  Calling All Astronauts followed me, and as I do, I followed back when musicians follow me.  I followed the link in their bio to this, their new ep.  Holy fuck!

Calling All Astronauts are an electronic/post-punk/industrial/dubstep politically aware trio from London.  Fronted by producer/programmer David B., J. Browning plays guitar and Paul McCrudden plays bass.  Heavily influenced by everything from Sisters of Mercy to David Bowie to Pop Will Eat Itself, CAA sound old and new.  B.’s voice reminds me of Andrew Eldritch of Sisters of Mercy, deep, menacing, and detached.  It also helps they use a drum machine, like the Sisters did in the 80s, when Doktor Avalanche was their backing.  His voice is also, at least to me, reminiscent of the deep growl of Preoccupations’ Matt Flegel.

So I went to this new ep, and then I dug into their back catalogue, and was deeply impressed.  Their originals are grand, both a call to arms in our dangerous times and a reflection of (post-)modern life as we know it.

Influences is a 4-song ep that, believe it or not, is a cover of four of their influential artists: Gary Numan, T. Rex, David Bowie, and Black Sabbath.  Only the latter is really a WTF? moment.  Covers are very difficult to do, especially when recorded for posterity.  You don’t really want to do a faithful version, and you don’t want to destroy the song.  And unless you’re Weezer, you don’t really want to mock the songs you’re doing either.  And if you’re trying to show your influences, you also want to stay true to your own sound. But Calling All Astronauts are up to the task.

Their take on Numan’s ‘Are Friends Electric?’ is impressive, to say the least.  A few years back The Dead Weather covered it, turning it into a dirty rock track.  CAA reclaim its electronic roots.  They are somewhat faithful to the original, which was recorded by Numan’s 1970s band, Tubeway Army.  But they make it their own: it’s vicious, dark, and dangerous.  This is the stand out track of the ep.

If Numan is an obvious influence, T. Rex doesn’t appear obvious at first, but the glam rock sounds of T. Rex and Bowie become clearer through their back catalogue, even if they take those influences, turn the guitars up to 12 and churn out industrial-sounding music.  Taking on Bowie is dangerous.  He was a singular artist, his songs and sound, as often as he mutated, were distinctly his own.  And then artists who could and did cover him with aplomb really starts with Bauhaus and ends with Tegan and Sara.  Calling All Astronauts get to join that list.

And then it ends with Deep Purple’s ‘Smoke on the Water.’   This is also a difficult song to cover, given its deep penetration of pop culture.  The riff is unforgettable. And, at least for Canadians of a certain vintage, it’s deeply ingrained in us that this is the music of the Devil, thanks to Kids in the Hall.

CAA keep the riff, and with some thundering bass and B.’s menacing, deep-throated growl, they own this song.  And the more I listen to it, the more it grows on me, as the original story about Deep Purple attempting to cut a few tracks in Montreux gets repeated, but not faithfully.  To do so would be impossible with B.’s growl.

I think I have a new favourite band. 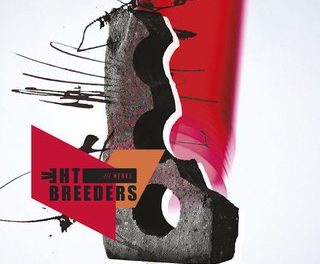