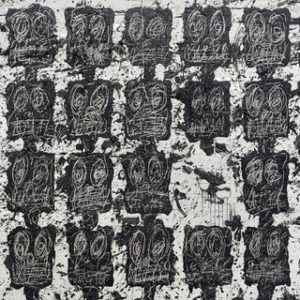 Streams of Thought, Vol. I
Human Re Sources

Black Thought is better known as the frontman of The Roots, the legendary and long-standing Philly rap band that is perhaps better known to people today as Jimmy Fallon’s house band.  And as Jimmy Fallon’s house band, I have never seen much for Black Thought to do as his bandmates play music for the show.  This is a shame, because Black Thought may be the greatest rapper of all-time.  Or at least he’s close to it.  He has a smooth, velvety delivery, despite the gravel in his voice. It’s hard to imagine that after a quarter-century in the game, this is his first solo outing.

He apparently recorded a solo album in 2013 with Jim James of My Morning Jacket and Tunde Adebimpe of TV on the Radio.  The album is called The Talented Mr. Trotter, but for some reason, it has never seen the light of day.

There was a time that Black Thought was regarded as the weak link in The Roots, but I always thought those critics were drunk or something.  If ever there was any doubt about his genius, there’s the Funkmaster Flex tape from last year. There’s so much to point out in this ten-minute rhapsody, from checking his own history and the Roots album, Things Fall Apart, the title taken, of course, from the Chinua Achebe novel.  He freestyles, referring back to the Bible, oil politics, F. Scott Fitzgerald, Kim and Kanye, and damn near everything else. AND HE DOES IT ALL SITTING DOWN!

And, well, Stream of Thought is some brilliant stuff.  Always a deft lyricist, Thought here continues showing off his chops, and, rather than it sounding weird to hear him without Questlove and the Roots backing him, it sounds natural.  Rather than the natural-sounding, jazz-based music of the Roots, producer 9th Wonder gives Thought the updated boom-bap over which to drop his lyrics.

And his lyrics.  ‘Dostoyevsky’ mirrors the Russian author’s brilliant Crime and Punishment.  I’m not sure I’ve ever heard allusions to 19th century Russian literature in hip hop before.  But he also refers back to the streets, where some of his best songs have come from.  And he speaks of the struggle of African Americans today.  Opener ‘twofifteen’ is a standout amongst the general standouts on this short ep:

I heard murder ran, as vast as deserted land
Since back when Burning Man was blacks in Birmingham
Before the presidential election diversion scam
Matter fact, before they clipped Franz Ferdinand

He goes onto wonder about picturing his daughter sipping water from a fountain with a sign that says ‘For Coloured Girls.’  There’s nothing to say in response to this.  Thought drops this with fury in his voice, and that fury is powerful.  And it stings to think this shit is the same as it ever was in so many ways.

The only question I have now, is when is the rest of this coming out?