(Un)Reality TV: Trump, Kelly, and the Revolving Door of Whiteness 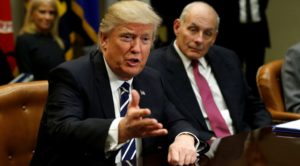 With a reality TV president in office, it should be no surprise to watch, once again, as the revolving door between reality and TV swings once more, and we are left unclear which side of it we are on. And yet I am stunned at the usefulness, not for the first time, of the show VEEP, in helping us to understand Trump in Washington.

In Season 6, episode 8 of VEEP, we meet the father of Selina’s devoted assistant, Gary. Selina, for those who do not know the show, is an empty, ambitious woman who will do or say anything to get what she wants and is indifferent to, and indeed totally unaware of the impact of her actions on those around her. In this particular episode, after 5 ½ seasons of degradation and dependence, Gary gets Selina to go to his hometown, meet his parents, and attend a party he wants to throw. Jessica Goldstein summarizes what happens next:

Before the party, “Gary confides in Selina that he has this childhood story, a loving one he has tenderly held all his life…The party has gone in decidedly not Gary’s planned direction … [and then Selina, who is trying to impress one of the guests with her folksiness] gets up to give a toast … and she steals Gary’s story. It’s a wonder to behold. She does tell it better than he does, fake folksy lines and all,” and she ends with an authentic-sounding line: “’He just wanted to make his little girl as happy as a hound dog with a horse’s Johnson.’ Gary’s face as he sees that Selina is really going to take every last thing about this milestone away from him is wrenching. He is gutted. The betrayal leaves him speechless, and, as usual, Selina is cavalier about the pain her actions have caused.”

Sound familiar? It should. This, I imagine, is the scene in the Oval Office earlier this week, when General Kelly shared privately his story of his son’s death with the President, using language that military men who have earned it use for such things. ‘He knew what he signed up for.’ ‘He understood the mission.’ Or, perhaps, as he put it, later after the scandal began to unravel: He “was doing exactly what he wanted to do when he was killed…He knew what he was getting into … He knew what the possibilities were because we were at war.”

I imagine this was all part of Kelly’s effort to persuade Trump NOT to call the survivors of those who died in Niger and elsewhere. ‘Sir, there’s nothing you can do to lighten the burden on these families,’” he says he told Trump. I imagine he was suggesting, on the surface, that there is no lightening the burden for the bereaved that anyone can offer, but he was also saying, beneath that, the real truth, which is that there is no comfort this president can offer, given who he is, how he talks, and so on.

As part of this conversation about whether or not to call the bereaved, Kelly also mentioned that he, himself, never got a call from Obama. He said this in the context of a conversation in which his aim was, again, to prevent Trump from getting on the phone, likely knowing that it could not go well. But Kelly misstepped. Undoubtedly thinking that by taking Obama out of the calculus, he frees Trump to not call, Kelly failed to anticipate the infantile one-upmanship that inevitably kicks in. ‘Wait: Obama didn’t call?’ I can just see the VEEP-like digestion of this information, the presidential brain processing it clunkily to conclude: ‘Then I WILL! I will be better than him! How hard can it be? And think of the press coverage!’

Shortly after, asked in a press conference about why he has not spoken about the 4 dead in Niger, Trump, channeling VEEP’s Selina, tells part of the story that Kelly has told him: Obama didn’t call everyone, but he, Trump, does, or will.

Then later, in a phone call with the family of La David Johnson, one of the four American men who died in Niger, Trump uses the words and phrases Kelly used with him. They are manly phrases: ‘he knew what he signed up for!’ When Kelly said those words, Trump admired them. He was admiring the man who said them. He thought that if he stole the words, he could steal also the character, history and experience he admires in Kelly. He could do it cavalierly. Why not?

But Trump is no Selina. He couldn’t pull it off. And Kelly is left in the role of Gary, whose face, “as he sees that Selina is really going to take every last thing about this milestone away from him, is wrenching.” Unlike Gary, however, Kelly is not left speechless. Kelly says things, and now he makes it worse. Because the things he is used to saying in his circles are not now the things to say in the circle into which he is made to step by all of this. The congresswoman is not a political congresswoman, she herself is kin; she is not listening in on a phone call, she is part of the family circle to whom the phone call is made. She is saying things that are true: Trump’s words did not convey to the bereaved the care and comfort he proclaimed as his but rather the callous disregard he has for everything. The words that Trump said were offensive because they are words for men and women in the armed forces to say to each other. They are not the words that a draft-evading, cavalier, military wannabe and serial user of people can say with credibility and they are not the words anyone says to grieving non-military family members, either. They were words said to Kelly by his military friends and colleagues. I doubt very much they were the words he said to his wife Karen when, as he says, he went upstairs to break her heart. And so when Trump stole them for himself, to say them to the wrong people, at the wrong time, in the wrong way, they felt foul. They rang false, and hollow. Of course they did.

That is not the end of the story. So far it is all just tawdry, VEEP-level tawdry. The real irony is in what happens next, as Kelly begins to sound more and more like Trump. The revolving door turns once more and suddenly Kelly, who has never spoken publicly about these things, is speaking in public, about his loss and about who gets to speak about loss: only people with a direct experience of or relationship to life and death in the military.

But wait, that criterion leaves out the current President and includes the Congresswoman the administration is currently out to discredit. That is Congresswoman Frederica S. Wilson (D-Fla.), who shared with the press how Trump’s bereavement call aggravated rather than alleviated the Johnson family’s suffering. She is in the Gold Star circle by virtue of her years-long involvement with the Johnson family and others.

What to do? Kelly unspeakably steps into the racist waters of the White House, referring to Wilson, who is black, as an “empty barrel” that sounds loudest as a drum, meaning she was, as he also said: “grandstanding.” It is false, as so many of Trump’s claims are. This time there really is a tape, and it vindicates the Congresswoman. Remember when Trump called Comey a “showboat?” Who’s speaking whose words now? But Kelly is not stealing from Trump as Trump stole from him. No, the General on stage is now, himself, an emptied barrel, speaking the empty words of an empty man whose Midas touch turns everything not to gold, as he clearly wishes to persuade us, but to Whiteness. And this is a step even Selina’s Veep has not taken. That is how we know VEEP is fiction. And the calumnious verities of Fox News are made real. 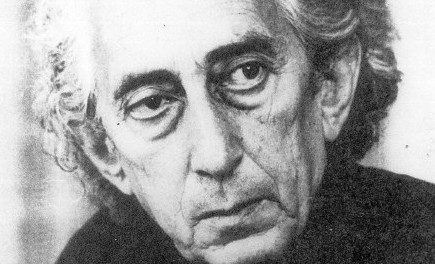 Jewish Tourism, or, I never cared very much for the Holocaust – Part I 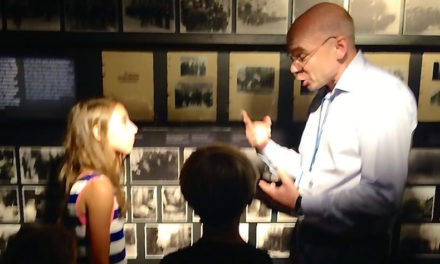 Border Walls and Alien Homelands: Reflections on Dariusz Stola’s Lecture, “The “Anti-Zionist” Campaign in Poland, 1967-68, and Its Echoes Today.”