Spitballing in a Pandemic 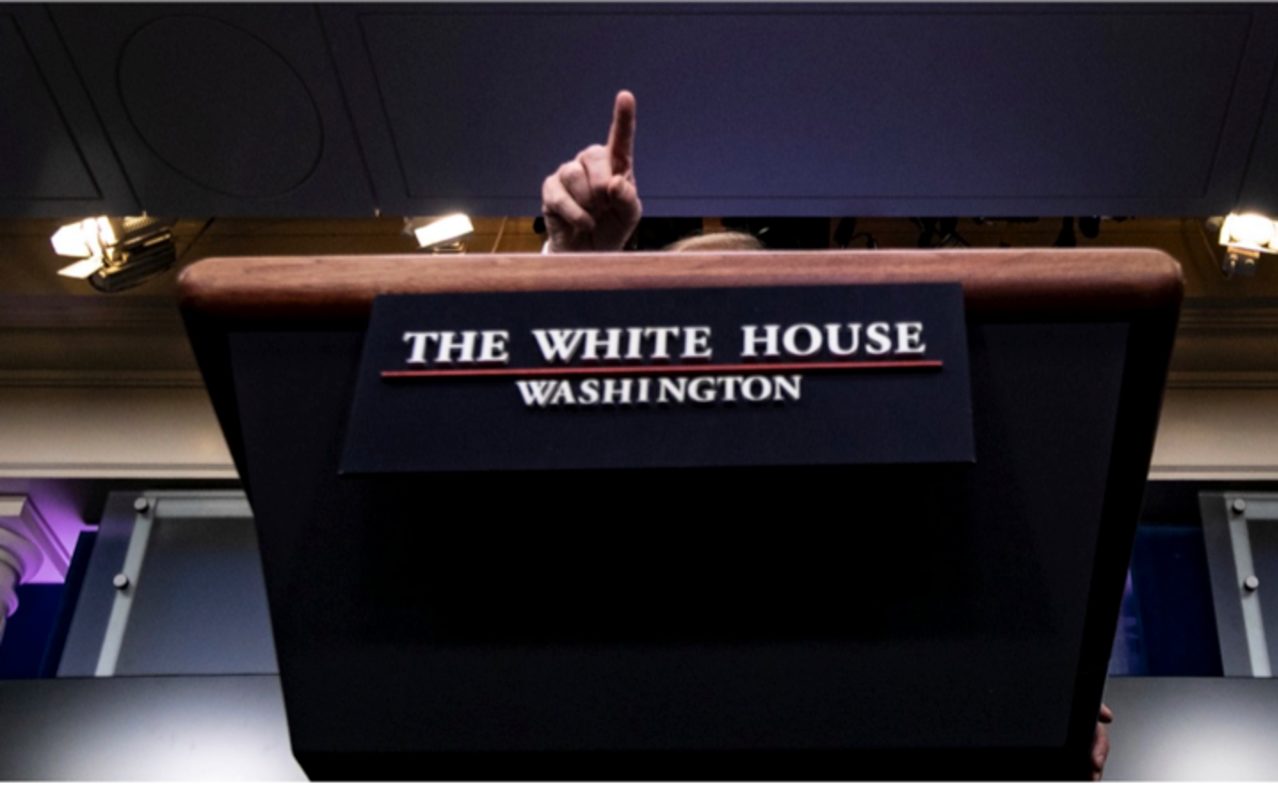 Spitballing in a Pandemic

Isn’t it ironic that bleach, an agent of whitening, may bring about Trump’s downfall? After all he has done for whiteness?

And that television, the medium that gave life to his personal and political ambitions, may be the instrument of his demise?

Social distancing recommends we stay 6 feet apart from each other lest our speaking, sneezing, or coughing spread viral droplets to others. Spit is a carrier of Covid 19, a danger to public health. So is spitballing, which is what Trump dangerously did at the White House Press briefing on Thursday April 23rd. Musing out loud like Jeffrey Epstein at one of his “science” dinners, Trump asked about the powers of bleach to kill the virus not only on hard surfaces but also inside the human body. After a presentation by William Bryan, DHS acting undersecretary for science and technology, Trump said: “I see the disinfectant, where it knocks [the virus] out in a minute – one minute – and is there a way we do something like that, by injection inside, or almost a cleaning…so it would be interesting to check that. So, that, you’re going to have to use medical doctors to with. But it sounds interesting to me.”

Dr. Birx, who has been tasked with coordinating the federal government response to the virus, later tried to explain it all away on Fox News, and what she said rings true: “When he gets new information he likes to talk that through out loud and really have that dialogue and so that’s what dialogue he’s having.” The issue, she implies, is not the musing: that is his process. The issue is that it happened in the wrong place at the wrong time.

But Trump knew that. He mused publicly because he hoped to give us all a peek behind the scenes. He has ideas and his people take them seriously! See? And who knows? He himself might come up with the cure! As he said in early March, during a visit to the headquarters of the Centers for Disease Control and Prevention. “People are really surprised I understand this stuff.” But they shouldn’t be surprised. His uncle was at MIT, you know: a “super-genius,” who “taught at MIT, like, for I think a record number of years.”

Digesting information live on television is good TV! Trump surely imagined that when we all watched him, as he asked for more research, we would see a man in charge. But what many saw was an ignoramus setting the research agenda with his power like Jeffery Epstein did with his money. On Thursday it was like we were all at one of those “science” dinners, watching the great man pontificate while some of the invitees squirmed, but stayed, perhaps thinking of the girls or the money that would come later.

In the case of Dr. Birx, I imagine more noble motivations. She has spent her career fighting AIDS around the world. When Trump introduced her at one of his White House press briefings, he mentioned how committed Birx was to her work and he also mentioned how much money the U.S. spends on that cause, singling out Africa. He said something like (I paraphrase here): over 6 billion dollars, can you believe it? – that is a lot. Maybe too much; I don’t know. We’ll see. The message was clear. Your life’s work? It is in my hands… So, too, is the public’s health.

Those invitees at the Epstein dinners, scientists from MIT and Harvard, helped whitewash Epstein, escorting him back in to polite society after he completed his very short prison sentence. Arguably, all the President’s men and women now are doing the same for Trump. What we saw on Thursday in the briefing room is what is going on behind the scenes: his advisors indulge Trump’s bright ideas and take them seriously. “I just had a thought. Look into it.” He did not say it like it was an order. On Thursday, his tone was inveigling, whispery. He was impersonating what he imagines it looks like to have an idea. Buttressed by power and smothered in noblesse oblige, however, his “thought” was really a command: act like it’s a good idea. — Yessir, we will.

But the public won’t. The public has seen exactly what Trump wanted to show us, but we interpret it differently. Where he meant to show verification – see, my staff think I’m smart! — we saw coddling. Isn’t it ironic that the president whose platform is built on dismissing so-called snowflakes is the most coddled man in America? His presidency is a participation trophy and his every performance is given an A+ by his staff.

Sadly, some were taken in. In Maryland, more than 100 people called emergency hotlines to ask for more information about this latest cure. Taken aback by the criticism that followed, Trump repositioned himself. “I’m just here to present talent. I’m here to present ideas, because we want ideas to get rid of this thing.” In short, that stuff about bleach has nothing to do with him. His role is to host the show, like Pat Sajak, not star in it. Sometimes he might bring out Vanna White, I mean Ivanka, to help host.

But even TV may not save Trump this time. Trump televisual power has served him well, as has his determination to get free TV airtime. But his daily pummeling of the press has begun to backfire. Unlike at the rallies he can no longer hold, the press is there to respond to his charges. Unlike earlier in his term, they seem less inclined to coddle and more inclined to, well, press. Together every day, day after day, on camera, the White House press corps seems to have summoned resources of resistance and solidarity that have not until now been evident. “That’s not true,” one reporter was heard to object when Trump claimed the press was celebrating the casualties of the virus (repeating an earlier calumny of his, that he saw American Muslims celebrating on 9/11). Another, when called on, offered their opportunity to question the president to a colleague who had been earlier cut short. And on Friday, the day after the bleach episode, there was what Jim Acosta called “almost an act of civil disobedience.” White House officials tried to force Kaitlan Collins of CNN to change her assigned front row seat to one in the back assigned to the Washington Blade’s Chris Johnson. But Johnson refused to get out of his seat and Collins refused to move out of hers. Threatened with action on the part of the Secret Service, both reporters stayed where they were. The White House relented and Trump took no questions that day. He left the briefing room after speaking uncharacteristically briefly, and performed his pique by turning on his heel the second Pence stopped speaking. That day, anyway, Trump knew how to read the room.

Have we arrived finally at the “Have you no sense of decency moment” so often invoked since the 2016 election? Maybe. It will depend in part on how committed the press are to the course they are now on. Will they coddle or will they press? Might they follow up on that whistleblower we have not heard about since the bleach episode? He is a career scientist, not a political appointee, suddenly reassigned or demoted after he resisted efforts to fast track hydroxychloroquine.

Hydroxychloroquine was the previous unproven treatment recklessly touted for use against coronavirus by Trump and Fox news. Now it is bleach, said not only to whiten but also to brighten. Isn’t it ironic? That whistleblower’s name? Dr. Bright.