I watched both the AFC and NFC Championship games last weekend.  I haven’t watched as much football or even NHL hockey this year and I’ve been trying to figure out why.  In terms of hockey, my team sucks, but, I’ve remained a fan of hockey in general when the Habs have sucked in the past.  When it comes to the NFL, to be a Chicago Bears fan is to know misery.  They’ve sucked almost continually for the past 35 years.  So I’ve watched a lot of football, despite my team being in last place.

But this year, something has changed.  I have long had issues with football, the injuries, the concussions. I played football when I was younger.  I have lingering injury issues, and I don’t want to think about how many concussions I’ve had.  No one cared about head injuries in the late 80s/early 90s.  And then there’s the question of football and CTE.  I wrote about this a few months ago, when the Commissioner of the Canadian FootbalL League, Randy Ambrosie (a former CFL player) insisted that we don’t know if there’s a connection between CTE and football.  Funny, the NFL has admitted there is a connection.

Houston Texans QB Tom Savage convulsing after hitting his head on the turf after being hit.

Hockey isn’t doing much better.  We have been subject to a steady stream of stories about ex-NHL players being caught up in drug addiction, depression, and early death.  This has happened to stars like Theoren Fleury and Mike Richards, and it’s happened to former enforcers, like Chris Nilan, Derek Boogard, and so on.  Earlier this month, I read an article about former enforcer Matt Johnson, who was in jail in Los Angeles after vandalizing a Denny’s restaurant on New Year’s Eve.  Johnson claimed to be homeless and refused legal help, at least initially.  His dad reported how worried he was about his son, and how much he’s tried to help him in recent years.  Or how about Kevin Stevens, who was one of the greatest power forwards of the early 90s, who devolved into addiction to painkillers?

To me, it seems that these athletes are sacrificing their bodies, their brains, and their futures to play.  And, yes, part of that is their own choice.  But, there are also structural issues here.  Teams have historically pushed their players to play injured or not.  Teams have pushed painkillers on players.  And then there’s brain injuries.  The NFL has come to an agreement with a group of former players for payouts for concussion damage, though there are problems there.

But that doesn’t do much for the current game.  Think of Houston quarterback Tom Savage continuing to play after appearing to convulse after hitting his head on the ground.  Or how about Rob Gronkowski in the AFC Championship game, when he was knocked silly by Barry Church of the Jacksonville Jaguars.  After the hit on Gronkowski, the Jaguars celebrated, and the commentators, Jim Nantz and Tony Romo (a former NFL quarterback), just carried on as if nothing major happened.

Then there’s the NHL.  A group of former players has brought a class-action suit against it.  The league’s response? To challenge the science behind the linkages between hockey and brain injuries.  Seriously.  It is otherwise doing next to nothing, beyond a ‘concussion protocol’ that is as much of a joke as the NFL’s.  This week, TSN in Canada reported that former NHL star Eric Lindros, whose career (and that of his brother) was ended by concussions, and Montreal Canadiens’ team physician Dr. David Mulder, approached the NHL last year and challenged the league to donate $31 million (or $1 million per team) to fund research in brain trauma. The league has ignored them.

And so, ultimately, I am finding it increasingly difficult to watch NFL or CFL football or NHL hockey.  Watching 200+ pound men smash into each other at full speed, in many cases purposely targeting the head is nauseating.  And wondering about the long-term effect of concussions is equally nauseating.

And until fans and advertizers really do question these forms of brutality against the bodies of professional athletes, nothing is going to change. 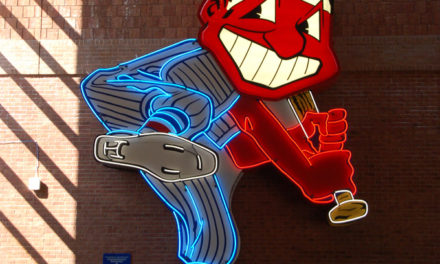 The (Sort of) End of Chief Wahoo

The Moral Ambiguity of The Man in the High Castle