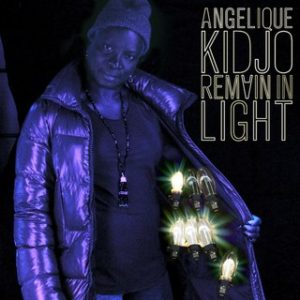 Remain in the Light
Kravenworks

In 1980, Talking Heads released their landmark Remain in the Light.  Working, as usual, with Brian Eno, the band was attempting to prove it was a band and not just one talking head in front of a group.  So they retreated to the Bahamas, listening to a lot of Fela Kuti and getting into African polyrhythms, as well as electronics and loops.  Meanwhile, frontman David Byrne conquered writer’s block by looking to early hip hop to come up with his patented stream of consciousness lyrical style.  It was, to that point, their first Top 20 album in the US, and it set them on a long road of exploring African grooves and sounds in their music, culminating in their swansong album, 1988’s Naked.  Since then, Byrne, America’s beloved eccentric, has been all over the place musically.

So when Beninese singer, and legend in her own right, Angélique Kidjo announced her plans to re-record the album, it all made perfect sense.  As she tells it, she first heard ‘Once in a Lifetime’ in a café in Paris after fleeing war-torn Benin in the early 80s, and she was studying jazz at the Centre d’informations musicales, and she was hooked.  She says she thought it was African music.

So she takes Remain in the Light and makes it a right, proper Afrobeat album, down to Fela Kuti’s drummer, the suddenly everywhere Tony Allen (he has worked with Damon Albarn repeatedly, as well as Charlotte Gainsbourg, Air, Jarvis Cocker, and Flea of late, as well as releasing two brilliant solo albums in the past few years).

Kidjo takes music made by robots (as Talking Heads were amazingly devoid of human emotion in their music) and makes Remain in the Light a warm sound.  Fuelled by propulsive bass and drums, Kidjo’s vocals soar over the rhythms as she injects some much needed humanity into Talking Heads’ songs.  What I find most fascinating, after listening to both hers and the original version back-to-back a couple of times, is that she, for the most part, relies on the original riffs and then builds this incredible Afrobeat orchestral song around them.

And holy shit, when her powerful voice takes on ‘Once in a Lifetime,’ well, you just have to hear it.

But it’s not just that.  The original album was recorded in the waning years of the Cold War, with an existential nuclear threat oppressing the air around us, and the US was in the middle of the Reagan years, exacerbating poverty, as the the gap between the rich and poor grew in the US and globally.  And, listening to Remain in the Light re-imagined as an Afrobeat party in the current political climate, well, rather than feeling alienated, we end up feeling energized, even if it is all just the same as it ever was.