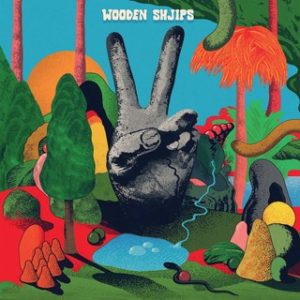 The mighty Wooden Shjips have returned to port, with their fifth full-length, appropriately entitled V.  Wooden Shjips are a stoner-rock band from San Francisco and have consistently turned out brilliantly droning albums since 2007.  If you don’t like the stoner-rock label (which I don’t), I can dig into my Music Critic Bag of Tricks™ and provide the other, alternative labels: psychadaelic rock; drone rock; experimental rock; minimalist rock.  In other words, labels are kinda bullshit.  But we already  know this.

V. is more of the same from Wooden Shjips (in case you’re wondering, that’s pronounced Ships), and this is a good thing.  There’s something comfortable about their music, big, fat bass lines drift across crisp-sounding, slow-moving drums, whilst guitars float along the top register, and occasionally some trippy keyboards stop by for a visit.

This is apparently Wooden Shjips’ summer album, at least according to frontman/guitarist Ripley Johnson (the band is filled out by keyboardist Nash Whalen and the rhythm section of Omar Ahsanuddin and Dusty Jermier).  Like a lot of American music of late, this is a response to the growing angst and paranoia around us.  The album was recorded in Portland, OR, the noted lefty paradise.  You’d think that’d be grand, but, no.  According to Johnson,

We had huge forest fires just outside of Portland and there was intense haze and layers of ash in the city. I was sitting on my porch every evening, watching ash fall down like snow, the sky looking like it was on fire. It was an apocalyptic feeling. Summer in Portland is usually really chill and beautiful, and we were working on a ‘summer record,’ but the outside world kept intruding on my headspace.

Hard to imagine a world where the outside world doesn’t invade our headspace these days, to be fair.  There’s a lot to like on this record; like I said, it seems more of the same, but then you realize it isn’t.  It’s still well-nigh impossible to figure out what Johnson is singing about in his droney-spacey vocals, but the song titles give a hint: ‘Red Line,’ ‘Already Gone,’ and so on.  And then there’s the obvious play on the cover art, a giant hand flashing the V, which is both the Roman numeral for 5, and the universal symbol of peace.

Either way, it’s summer, and I’m digging this.

And, last thing, the record label: Thrill Jockey is a kind of legendary Chicago-based label, founded back in 1992 by former Atlantic Records A&R woman, Bettina Richards.  All kinds of underground heroes have recorded for the label, like Sea and Cake, Trans Am, the National, Mouse on Mars, Tom Verlaine, and so on.  But the cool thing is that every single and every album in the label’s discography is streamed, for free, on the website.  The business model is simply that if people can stream for free, they are more likely to buy.