The Dogs — Before Brutality 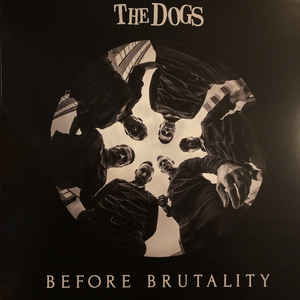 The Dog are a punk band from Oslo.  Formed away back in 2011, they released their début album in 2013, and ever since January 2014, they have put out a new album every January. In Norway, frontman Kristopher Shau is celebrity of sorts, engaging in performance art, hosting one of the country’s biggest podcasts, and even hosting a TV show on the Seven Deadly Sins that stirred up a bit of controversy.  But in the rest of the world, they’re a little less famous.  They did win Little Steven’s Coolest Song of the Year title in 2014, and they even opened for The Boss, Bruce Springsteen, in Norway in 2016.  It seems that Norway has a great pop-punk scene these days, something I get exposed to through my niece, who is the frontwoman of Stavanger-based Sløtface (though she did not, I might add, turn me onto the Dogs).

The Dogs descend from the Buzzcocks/Stranglers school of punk.  Along with Schau, Mads Martinsen plays guitar, Roar Nilsen the bass, whilst Stefan Höglin plays the organ, Henrik Gustavsen the drums, and Kenneth Simonsen does percussion and backing vocals.  Shau is the ideal punk frontman, all sneering fury and sarcasm.  And Höglin’s organ is what revives the Stranglers.  In fact, Shau sounds like the original Stranglers frontman Hugh Cornwall.  But Shau, perhaps reflecting our times, is hella more depressed and skeptical of the world than Cornwall ever was.  Perhaps my favourite thing about them is their sartorial sense, as they dress in the same uniforms for every gig.

‘There Won’t Be an Encore’ is the standout track, about a breakup.  Somehow Shau shows some vulnerability through that growl, chanting that a ‘relationship is just another word for something gone bad’ whilst Höglin’s organ swirls around.  Another standout is ‘Who’s Gonna Pay,’ which starts off with a punk rock chant asking, ahem, ‘who’s gonna pay?’ before the guitars kick and Shau sneers that he has ‘no fucking cash and [his] card has been denied.’  So the basic question is who’s gonna pay?  Someone’s girlfriend?  Someone’s dad?  Maybe rob a drugstore?  What I particularly love is the call and response here, as Schau makes multiple suggestions for who’s gonna pay and the response shoots everything down.

This is some seriously catchy music.  The Dogs deserve worldwide glory.