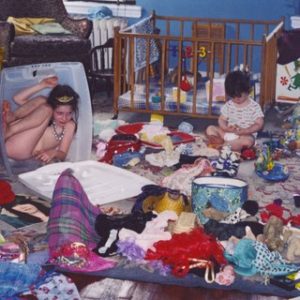 This is Sharon van Etten’s fifth professionally released album, but she also put out another five albums by herself, recorded to CD-R back in the day.  But, I don’t think anyone really heard her until 2014’s incandescent, beautiful, and amazing Are We There Yet.  That was a breakup album, which centred around the epic track, ‘Your Love is Killing Me,’ where she threatened to break her legs so she wouldn’t run to her ex-lover, to cut her tongue so she couldn’t talk to him, and so on.  It was an arresting track, her powerful voice beating the listener down, feeling her pain and agony in a nasty breakup.  I remember the first time I heard it, I was driving south from Montréal to Boston, where I lived at the time.  There’s a stretch of I-89 south of Burlington and north of Montpelier, just before you head up into the Green Mountains where you come around a bend in the highway and there is an overpass over the interstate, a river flowing to your right, and the mountains are just there, just out of your reach.  It was a bitterly cold winter day.  I nearly crashed the car.

Remind Me Tomorrow is a much happier album, and starts with ‘I Told You Everything,’ which presumably is about meeting her current partner.  This track is more of the same from Are We There Yet, sonically, centred around her piano and some intense lyrics:

But then, starting with track two, ‘No One’s Easy to Love,’ we move into a new sound for van Etten, if not a less intense lyrical style.  Instead of the piano, the rest of the album is much more electronic, more keyboards, more outright beats.  On first listen, I was underwhelmed, to be honest.  On the second, I became more intrigued.  By the third listen, I was hooked.

‘Memorial Day’ is an interesting track for its moody nature, with van Etten’s voice layered to an effect that sounds more vintage Sarah McLachlan than anything else.  But, the centre of this album is ‘Comeback Kid,’ a rousing EDM-based track over which her vocals soar.

I fear for van Etten’s future, though.  I have been in Starbucks twice since this album dropped, and both times I heard ‘Seventeen,’ from this album, which recalls seems to recall her own past, with some fictionalisation, working in record stores and cafés in Murfreesboro, TN, and back home in New Jersey before she moved to Brooklyn in 2005.

In a lot of ways, van Etten is the most unlikely of stars, given her roots, and her years of working in those record stores, cafés, and liquor stores, through her indie releases.  Even her early albums didn’t attract a lot of attention.  But, she certainly wears it well.  Remind Me Tomorrow is a most excellent follow up to Are We There.