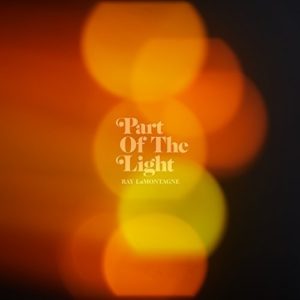 Part of the Light
RCA Records

Ray Lamontagne is a kind of surprising rock star.  He comes from a folkie background, but sometime around his brilliant 2014 album, Supernova, he abandoned his folk singer ways (to be fair, this was coming on his 2010 album, God Willin’ & The Creek Don’t Rise) and delved into psychadaelia, rock’n’roll, and, well, to borrow from the NME in England, God-Like Genius.  Lamontagne not only writes a wicked hook, he’s got this world-weary dusty voice, and his music sounds like it comes from this dream-world, where, I have to say, life is better.  Lamontagne is also a reluctant rock star.  He’s intensely private, he lives a quiet life in Western Massachusetts.  You see the guy around, and you don’t think anything, it takes you a second to realize you’re looking at a rock star.  He’s just the guy down the road.

Anyway.  Part of the Light has taken me a bunch of spins to get all the way in on.  It seems he’s gone deeper into the psych, he’s been listening to the Rolling Stones and Pink Floyd.  The opening track, ‘To The Sea,’ is my favourite track.  I can’t really tell you why, there’s something about the lyrics, which seem to drip a kind of paranoia, not necessarily in the words themselves, but how Lamontagne delivers them:

I’ll be waiting in the car
If you wouldn’t mind,
Could you find my yellow shoes?
I think they’re under the stairs.
Fa la la la fa la.

Not exactly the stuff of nightmares, no.  But his delivery does give me nightmares.  As he sings of a trip to the sea, presumably with his wife, I find myself wondering, waiting for the other shoe to drop.  The axe murderer?  The divorce?  The car crash?  None of it comes, of course, Lamontagne remains calm throughout, narrating a trip to the sea.  But this is exactly why Lamongtagne has been one of my favourite musicians the past few years, his songs occasionally hint at something much deeper and much darker, but he doesn’t really go there.

And on Part of the Light, Lamontagne’s folksy growl is largely reduced to a whisper, which I think is what feeds me sense of doom listening to the album.  But even the love songs, like the gently beautiful ‘It’s Always Been You,’ directed at his wife, Sarah Sousa, who is a poet of some repute.  Love songs are a dangerous thing, it is really easy to create syrupy, cheesy long songs, like the early Beatles.  But Lamontagne is too clever to fall into that trap.  His love songs are always beautiful, carefully crafted gems.

And that’s the other thing about Ray Lamontagne, he is a craftsperson.  These Hills of Western Massachusetts (my home as well) are full of craftspersons of all sorts, from carpenters, to masons, dairy farmers, jewellery makers, writers, brewers and distillers.  Lamontagne crafts his songs, both words and music, adding layers of vocal effects, of music, and then he stops.  He knows when too, there is never a wasted note, word, or flourish.

All in all, on Part of the Light, Lamontagne strips down his sound somewhat from the thick and warm Ouroboros, his brilliant 2016 album.  In a lot of ways, this new album feels like the morning after, we’re slightly hung-over, but feeling pretty damn good about last night.