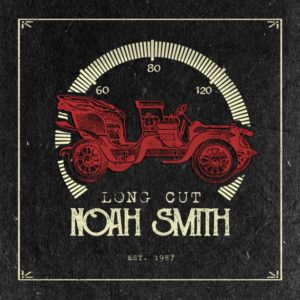 Something interesting is happening in country/American music of late.  Artists like Jason Isbell and Sturgill Simpson have clearly and purposely turned their backs on the Nashville industry, focusing on songcraft and story-telling.  Those two are the leaders of a new kind of outlaw country, minus, of course, the ultimate bad-assery of the likes of Waylon Jennings, Willie Nelson, and company.  My problem with this is I can no longer declare that I love all forms of music, but country.  And into this new country tradition comes Brown County, OH’s Noah Smith.

Smith is drawn to the narrative, claiming that back in the day of mixtapes, it was always the lyrics that mattered to him.  He also sees his home state as the American melting pot.  Long Run is his first long-player and it bristles with rollicking songs, his clear voice and an energy that is the key component of his live show.  His songs are carefully constructed and he avoids the slickness of the Nashville sound.  His songs are all stories: love, small-town life, and the alienation of trying to go home again. And even if they fall into the tropes familiar to listeners of pop music today, between his musicality and ear for small things in his songs (like buried guitar licks, Edge-like shimmery guitars, cute little fiddle licks) give him both a familiarity and a fresh voice on the scene.

Smith lists an eclectic collection of influences, from Death Cab by Cutie to Johnny Cash, and in a lot of ways, all of this gets buried into his sound.  In other words, he’s not a straight-up country artist.  My favourite tracks are the opener, ‘We’re on Fire’ and ‘Out of State Tags,’ and the closer ‘Damn the Devil in Me.’