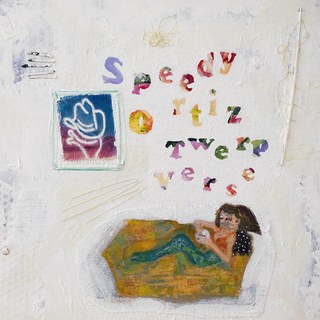 Speedy Ortiz are the darlings of the indie scene in Northampton, MA, just down I-91 from me.  Frontwoman Sadie Dupuis moved to NoHo, as the hipsters call it, back in 2011 to start her MFA at nearby UMass-Amherst.  I was piqued by the band’s name, Speedy Ortiz is a character in the Love and Rockets comic series, which is from whence one of my favourite bands of all-time took their name.  Come to think of it, I’m not sure they’re even a NoHo-based band anymore.  Wikipedia has claimed they’re based there, Boston, and Brooklyn.  Whatever.

Twerp Verse is the third album from Speedy Ortiz, sporting new guitarist, Andy Moholt.  Speedy Ortiz don’t play revolutionary music.  They’re 90s guitar revivalists. and to me, they have a lot in common with fellow Massachusetts bands Buffalo Tom, Throwing Muses, and Belly, all giants of the 90s alt.rock scene.  And yet, the Speedsters are very much a band of our times, as Dupuis adds her voice to the collective angst of our times, both in terms of gender politics and #MeToo and the clusterfuck of our larger political scene.

One of my favourite things about Speedy Ortiz has long been the fact Dupuis doesn’t write hummable ear worms.  In fact, I love Dupuis for that alone.  And yet, her songs are catchy as fuck.  And they squirrel your way into your head, unconventional melodies and all.  When she and Moholt play duelling guitars, such as on ‘Movin’ In,’ the world is glorious again.  Early single ‘Lucky 88’ centres around a stuttering drum line, around which swirling bass and guitars build up a melody.  ‘Backslidin” has both wicked guitar and one of Dupuis greatest lines: ‘Took a walk in the sunlight/Because it wasn’y a bad night/Breakin’ up your furniture with steel-toed boots.’

And as a lyricist, Dupuis is almost without peer.  She does not hold herself down to one lyrical style, or one timbre of music.  She’s all over the place.  Sometimes she’s direct, like on ‘Can I Kiss You?’: ‘Can I kiss you/Because I want you.’  Of course, there’s the reverse in the same song, ‘Can you kiss me? You asked so distastefully.’  Then there’s her paean to the dumb boys out there: ‘Dumb as molasses/They hibernate half the year’ (from Alone With the Girls).  And my personal favourite, from ‘I’m Blessed’: ‘I’m blessed with a perfect pitch/I waste it on songs that you never even heard of.’  And yet, the rest of ‘I’m Blessed’ is a deeply disturbing allusion to sexual violence.  It is this, Dupuis lyrical ability to both be deadly serious and disarming, and then not, both/and, as opposed to either/or, that is her super power.