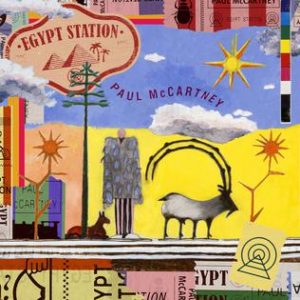 Here is something I never thought I would say: I really like Paul McCartney’s new album.  I grew up on the Beatles, my mom, my dad, and my stepfather were all fans, but of different eras.  My dad was a fan of the Rubber Soul era, my stepfather of The White Album era, and my mother preferred the poppy early Beatles.  Not surprisingly, Paul was her favourite.  John was about the only thing my dad and stepdad would’ve ever agreed on (they only met once, thank God).  So the Beatles are so deeply burrowed into me, I think they’re in my DNA.  I am also a John guy.  But Paul also wrote some of the sillier songs I loved so much as a kid and still do today (‘Ob-La-Di-Ob-La-Da,’ for example).  But John never had a great solo album.  Paul did, with Linda McCartney, with RAM from 1971.  But George had the best solo album, All Things Must Pass, also from 1971.

Anyway.  Since then, McCartney has fallen into the rabbit hole of cheese and schmaltz, I would argue.  And then, suddenly, Egypt Station.  He’s focused and determined here, his familiar voice like an old friend.  He even busts out the old leather lungs of the 1960s a few times.  I’m amazed he can still do it.  But it’s his song-writing that stands out here.  The entire first half of the album is top notch song-writing.

It’s actually harder that you’d imagine to listen to Paul McCartney without any preconceived notions, without thinking about his back catalogue, his legendary status, and to just listen to the songs you are presented with.  I hear his voice and think of everything from the horrible ‘Ebony & Ivory’ to ‘Helter Skelter.’  You hear his songs and you’re immediately thinking of everything from ‘Love Me Do’ to ‘Band On The Run.’

My current favourite track is ‘Confidante,’ which is directed at someone who let Macca down.  But it’s the way he’s structured the song around a simple acoustic guitar, with occasional descending bass, and an electric guitar.  It’s a simple song, but it’s the simplicity that reminds us he’s a great songwriter.  The next track, ‘People Want Peace,’ is a classic McCartney track.  It’s Beatlesque in the backbeat and orchestration, and then there’s this devastating little syncopated piano chord played overtop the music.  Even the anthemic clap-along with a chorus is the most McCartney thing ever, as much as the simple guitar of ‘Confidante.’

Taken together, Egypt Station is a stunning piece of work from one of the greatest legends of rock history.  And this is what makes the album even more impressive.  Macca doesn’t need to do this.  He doesn’t need to record music, he doesn’t need to push himself.  He’s made a billion gazillion dollars over the course of his career.  He has both critical and commercial success.  He was one of the two primary songwriters of arguably the most important rock band ever.  And yet, here we are with Egypt Station.