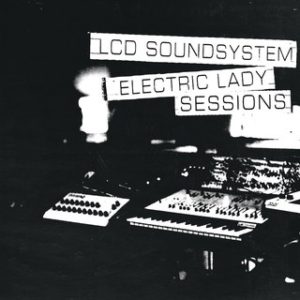 LCD Soundystem went on self-enforced hiatus in 2011 before re-surfacing with 2017’s brilliant american dream.  This album is meant as a live document, recorded on the floor of the venerable New York studio, built back in 1967 by Jimi Hendrix in Greenwich Village.  It was recorded at the end of the long tour behind american dream, and has the sound of a band well in tune and comfortable with each other.  It sounds tight, in other words.

Sessions is bookended by covers, opening with Human League’s, ‘Seconds,’ and finishing with Heaven 17’s ‘(We Don’t Need This) Fascist Groove Thing.’  ‘Seconds’ was originally written as a meditation on the assassination of JFK, but here, in LCD head honcho James Murphy’s monotonal voice, the chorus of ‘It took seconds of your time to take his life.’  Here, it is recast against the endless gun violence of the United States, which sees around 40,000 of us die per year.  As for ‘Fascist Groove Thing,’ The Guardian reminds us that it was once banned by the BBC.

The album kind of stumbles with the second track, ‘american dream,’ which I have always found to be, well, boring and kind of flaccid.  But the Soundsystem recovers almost immediately with one of my all-time favourites of their oeuvre, ‘You Wanted a Hit’ from 2010’s most excellent ‘This Is Happening,’ which is one of my favourite albums of all-time.  Here, the song gains a new urgency through the live recording and insistent drumming, which then propels the stuttering guitar and bass as Murphy’s voice both shows more inflection and sounds more world weary than he did in the studio back in 2009.

The songs of Sessions are taken mostly from american dream, which is really no surprise, given the band had just returned to New York after a long tour.  But This is Happening is also well-represented and a couple of tracks from 2007’s Sound of Silver appear.

‘Call the Police,’ which is the best song on american dream here becomes more than just the rousing anthem it is on record, as the guitars become more obvious, as does the syncopated bass.  ‘Home,’ from This is Happening is sped up, becoming a more desperate demand to be taken home.  And american dream’s ‘Emotional Haircut’ here emerges from the recorded version with a more dangerous lingering bass and angular, shattering guitars.  Here, it’s a post-punk classic, or so it sounds.  And as the song builds to a crescendo, this well-oiled machine steps up the racket to a point where I didn’t expect it.  Murphy’s voice, meanwhile, sounds about as desperate as I’ve ever heard him.

Taken together, this is a fascinating document of a band at the height of its powers.  What I find even more fascinating is that live, LCD Soundsystem are a band, whereas on album, they sound more like Murphy alone in his room noodling around.  The human element of this album fleshes out Murphy’s songs, as the rest of the band takes on a personality of its own, encompassing him.