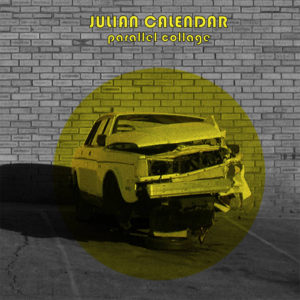 Julian Calendar describe themselves as making ‘dark music for dark times.’  That’s the thing, they aren’t that dark, though I won’t argue with the comment about the times.  Coming from the purple state of North Carolina, the members of Julian Calendar have seen some pretty nasty and stupid political wrangling of late.  Based in the big city of Charlotte, the band is an amalgam of musicians, novelists, and first time singers.  You can read our feature on the band here.

Band leader Jeremy Fisher came up with the structures of these songs a few years ago in his home studio in Charlotte, and then he tried to figure out what to do with them.  So he turned to some musician friends, most notably Scott Thompson who, along with Fisher is a multi-instrumentalist.  And then Fisher approached Charlotte poet Amy Bagwell and local novelist Jeff Jackson to contribute lyrics.  Jackson ended up fronting the band with Hannah Hundley, whose significant other was once in a band with Fisher.  Still following me?

Sonically, JC are indebted to the Velvet Underground and Sonic Youth in the main.  The use of strings and, most notably, a suspension string, in the music give them the VU feel, and Thompson and Fisher’s guitars give us the SY vibe.  In the parts where you least expect it, the guitars begin to shred and wail against a discordant and loping guitar and bass.  You can find any number of influences on the music, which Fisher openly acknowledges, but that doesn’t mean that the band are not originals.  They have a sound of their own, in part due to the music, and in part due to the vocalists.  Hundley’s vocals are reminiscent of Moe Tucker’s, slightly atonal and impossible to ignore.  Jackson, for his part, is a pretty straight-forward lyricist and vocalist, which is surprising given his fiction output of experimental, twisted tales.

When Hundley and Jackson harmonize, the results are amazing, given their different registers.  The central part of the album, running from track 4, ‘This Road’ through ‘Our Dark Century’ to ‘Acid-Eaten Sweetheart’ (for which Bagwell wrote the lyrics), is the best part of the album.  Jackson’s delivery of Bagwell’s lines on ‘Acid-Eaten Sweetheart’ is pitch perfect, especially in the breaks: ‘This is my song for you/Just don’t ask me to sing it.’  As Hundley points out in the feature, it is fun for her to sing someone else’s lyrics, she sees herself as the interpreter, like an actor.  And she’s right, I don’t know how Bagwell and Jackson envisioned her interpretation of their lyrics, but the her parts are clearly her own.

Parallel Collage requires repeated and careful listening.  One of my favourite albums of all-time is the Stone Roses’ eponymous début, not just because it is from start-to-finish excellent, but because even now, almost 30 years later, I find new sounds buried in the mix.  Parallel Collage is very similar, each time I’ve listened to it, I’ve found new sounds, both in terms of the music and the vocals.  I’ve been listening to this album pretty much non-stop for the past few months, I highly recommend it.  You can find it on on all your favourite music sites, like Bandcamp and iTunes, etc.  Go get it.  Now.