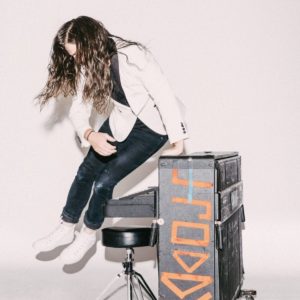 I saw J. Roddy Walston & The Business in a small room in Chattanooga this summer. It was hotter than hot that night, and the venue, while heavily air-conditioned, was putridly sweaty. In other words, it was the perfect night for some Southern rock’n’roll. Walston & The Business have made their name with their live show. Walston himself is a nutter on stage, swirling around, long rock’n’roll hair flying, as he pounds on his piano and screams into the microphone. At Track 29 that night, Mama Walston was there to see her boy; he’s from Cleveland, TN, which is just up I-40 from ‘Nooga.

They played a lot of new stuff. It sounded a bit different from their old stuff, less rocking, more moody, different guitar tones, less piano. And now that Destroyers of the Soft Life has dropped, it all makes sense. The band has changed its sound. Less rocking and more Kings of Leon. Their Facebook page is full of old time fans kvecthing about the shift and calling them sellouts. And worse.

My favourite album is their last one, Essential Tremors (2013), which starts with the blistering rocker, “Heavy Bells.” But, after that, the album mellows some, and Walston & the Business even break out some power ballads. So, the shift in their musical sense isn’t that surprising. It’s more of the same, really. Except the tones of the guitars, in particular, are different. The rocking is more contained. Really, it sounds to me like The Business want nothing more than to bust out and rock hard and heavy.

The second to last track, “Bleed Out,” is emblematic of this new sound. Billy Gordon’s guitar thrashes and wails over a series of drum rolls, occasionally reaching Edge-esque noises. And as drummer Steve Colmus does his best Animal (from the Muppets) impression, everything is kept back, kept respectable. Live this summer, this song was hard and heavy and hit like a ton of bricks from the stage.

So what to make of this? Really, Walston & The Business are great song writers. And that comes through, even in the softened tones of Destroyers…. Maybe their goal is to get on the radio. Maybe they want to be the second coming of Kings of Leon, who sought to be the second coming of U2.  I don’t know. And frankly, I don’t care. Destroyers of the Soft Life is a damn fine album.